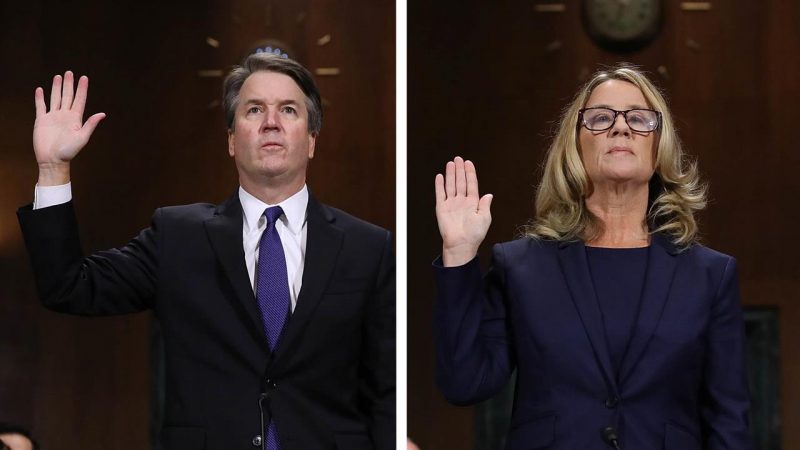 Justice Kavanaugh and Christine Blasey Ford during hearing about Ford’s allegations of Kavanaugh of sexual assault.

Amidst extreme controversy, Brett Kavanaugh was confirmed to the United States Supreme Court Oct. 6 in a 50 to 48 vote.

This story has dominated the news cycle as three women have accused Kavanaugh of sexually assaulting them while they were in high school or college with Kavanaugh.

The accusation that has gained the most attention is that of Christine Blasey Ford. Ford says that while at a party in high school Kavanaugh attempted to sexually assault Ford by pinning her down and trying to remove her clothes.

Deborah Ramirez, Kavanaugh’s classmate at Yale, came forward and said that Kavanaugh exposed himself to her during a party.

Julie Swetnick, while not accusing Kavanaugh of directly assaulting her, has said that she was present at high school parties where girls would be drugged in order for them to be gang raped.

Swetnick claims that Kavanaugh was a part of the group of boys who would drug and gang rape women. She says that she has personally witnessed Kavanaugh display abusive behavior toward women.

Before discussing the merit of these claims, it is important to note a few things.

First, this is a complicated issue. Due to the circumstances surrounding the accusations, being from over 30 years ago, there will not be a simple answer to the question of whether or not Kavanaugh assaulted these women.

Second, when discussing accusations from long ago, we must realize that there will likely be no physical evidence to corroborate any accusation. We must also confront the likelihood that we will probably never be able to make an absolute claim about whether these accusations are true or not.

Third, we must acknowledge that both sides of the political spectrum will try and use these accusations to their advantage. It is important that we try and maintain some sort of objectivity.

With that being said, I believe we should always predispose ourselves to believe victims. We should believe those who are less powerful because they are likely suppressed by society.

However, predisposing ourselves to believe victims has to be balanced with not automatically assuming the guilt of the accused.

We can believe those accusing someone of sexual assault but still hold that it is necessary to investigate these claims and substantiate them before treating the accused as guilty.

I believe the FBI investigation into the allegations against Kavanaugh is a warranted and appropriate investigation to consider in deciding whether these claims are substantiated.

The conclusions of the FBI report have been released to only senators. The FBI said that they reached out to 11 people to interview and ultimately interviewed 10 for their report.

Most notably absent from the interviewees was Ford and Kavanaugh. Democrats have used this fact to claim the investigation is a farce and Republicans have claimed it was not necessary for Ford and Kavanaugh to be interviewed because they testified before the Judiciary Committee.

The White House said that the goal of the FBI investigation was to determine if there was anyone who had first hand accounts of these incidents. The conclusions of this report have not been made public.

While the absence of the FBI’s findings makes it harder to take a stance on whether these assaults occurred, I speculate that the FBI could find no one else who witnessed these assaults first hand, or at least no one who wants to admit they were there.

Though the results of the FBI investigation might change my opinion, I believe that Ford is probably telling the truth. I do not buy the argument that she must be lying because she is just now coming forward.

To conceal and not talk about a traumatic event, such as this assault, is consistent with behavior of a victim of assault.

Ford does not have corroborating evidence for her story, but has released therapy notes and signed affidavits, by Ford’s husband and some close friends, which confirm Ford’s story.

Though I believe Ford, I do not think that there is enough evidence to disbar Kavanaugh from being on the Supreme Court – though the release of the FBI’s finding could change this opinion.

Do not be mistaken, this conclusion saddens me. I think that if there was corroborating evidence to support the claim that Kavanaugh attempted to rape Ford it should immediately disqualify Kavanaugh from being on our country’s highest court.

However, I cannot condone disbarring Kavanaugh based on claims that cannot be corroborated, even if I personally feel that the claims are true.

It truly makes me fearful that, if Ford’s claims are true, someone can rise to one of the highest positions in society while committing such an atrocity. Even if the crime was committed 30 years ago, there is no excuse for this type of behavior.

I hope that even though Kavanaugh is confirmed, the conversation surrounding sexual misconduct in society will not stop.

We may never know if Ford or Kavanaugh is telling the truth and this fact makes me feel helpless. Balancing the tension between believing victims and not assuming guilt of the accused will be a continual struggle for society.