They lived among us quietly,

in the slim stand of trees.

We thought them, then, almost magical,

not realizing they were

Often, there was a fluttering

in our peripheral vision. While our

onto the hoof of one, the white tail

and be moving ourselves

as if that was nature’s call–

to drag us from the sidewalk 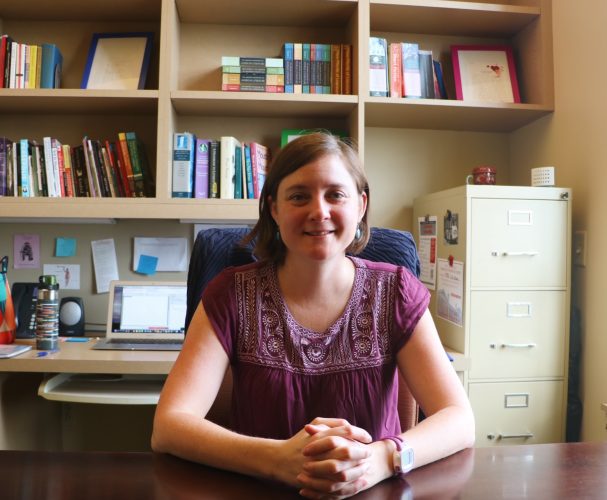 Becoming a published writer is a triumph that does not come without challenges. Dr. Ruth Williams, assistant professor of English at William Jewell College, sat down with The Hilltop Monitor to discuss the process of writing, revising and publishing poetry.

Williams has been writing poetry since high school. She has her MFA and Ph.D. in creative writing. She enjoys writing short free verse poetry. Writing is not simply a hobby for her but a part of her professional and personal identity.

Writing is not something that Williams does only when she feels inspiration. Being a writer means producing work – even when there isn’t an initial inspiring idea.

“Part of what happens as you grow as a writer is you start to do more of the work of the writing, less of the ‘I only write when I feel inspired’ and more of the ‘I’m just at my computer or at my desk just writing and saying what comes out and working with what comes out,” Williams said. “It becomes a much more intentional process.”

Williams recently had a poem called “Diana” published in Pinch, a literary journal produced by the MFA program at the University of Memphis. Her poetry book “Flatlands” was published by Black Lawrence Press in April. The book is available on Amazon.

Poetry books don’t tend to make as much profit as fiction books. This is why publishers typically accept submissions either through contests or open submission periods. Both require fees to submit.

Williams’ manuscript was published after being submitted during one of those open submission periods – though being selected did not come without past rejection.

“I had submitted my work to them several times previously and they had given me what’s called an encouraging rejection where they say ‘not this time, but we really like what we see here and we encourage you to submit again.’ So I did that several times with different manuscripts and then they decided to take this one,” Williams said of the process.

Rejection is a big part of becoming published. It is something that all writers – even those who are highly successful – must go through.

“It becomes less of a painful process and more just part of the process,” Williams said of learning to handle rejection.

Revision is another crucial part of the writing process. Williams thinks that leaving a poem alone for a few weeks before revising it is very beneficial.

“A fresh eye allows you to make revisions so much better than when you’re super close to it and you just wrote it or you’ve just been working on it,” Williams noted. “You’re really attached to various things and your feeling that in the moment can sometimes blind you to the revisions that need to be made.”

She notices that her students are often times reluctant to do this because they don’t see how time away from a piece can actually be more beneficial than spending that time editing it. This time away can give a poem that initially seemed to lack promise more value.

“There can be a poem that I look at and I think ‘that’s a really bad poem, I’ll never do anything with it’ and then maybe two, three, four, five weeks later I go back to it and suddenly I see something there, I work on it and it becomes something better,” Williams said.

Revising is hard for some writers since it requires one to identify flaws in their poetry. Williams thinks it is important to get past this and realize that fixing flaws is the only way to make something the best it can be.

“It can be a little bit difficult because it means accepting what you wrote is not perfect on the first try but that doesn’t mean it’s without value,” Williams said. “In fact I think most students find the revision process to be really rewarding because you end up making your work better.”

Becoming a more intentional writer is what Williams considers to be the first step toward becoming a professional writer.

“As young writers the biggest hurdle to get over is actually transitioning from that place where you simply write and call it good to really working on the writing,” Williams said.

She advises budding writers who want to be published to gain the courage to start submitting their work.

“I think if you want to take that next step towards publishing you just need to do it. I am continually frustrated by the fact that most students won’t submit their work to Inscape without me pushing them a little bit and the reason being is I think they’re shy, they don’t see the value in their work that I see and that’s difficult but you should believe that your work has value,” she said.

A writer has to be vulnerable when they submit their work to be published. They have to be prepared to face rejection. Williams doesn’t think the fear of being rejected should be a deterrent.