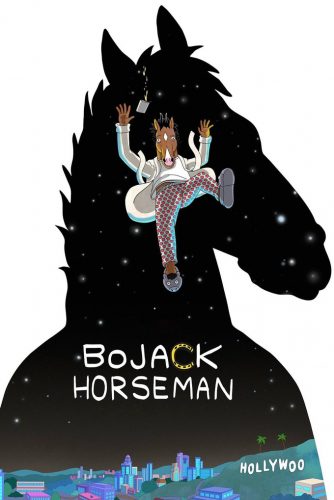 This article will contain vague spoilers. A few events will be alluded to, but I will not go into great detail.

I’m not a huge adult cartoon person. Sometimes I’ll watch “Bob’s Burgers,” and I usually enjoy it – though the voices grate on my nerves.

One day, about a month ago, I started absently watching “Bojack Horseman.” Truthfully, I’d been resisting it for a while. I heard about it long ago as a show that did a good job portraying mental health issues like depression.

I avoided it largely because I’m not really a fan of adult cartoons. Perhaps my misconceptions are limited to a select few abhorrent shows, but the genre in general seems clumsy with its capacity to wield heavier topics than children’s cartoons.

My particular issue lies with shows like “Family Guy,” “Simpsons,” and “South Park.” All three, particularly “South Park,” appeal to a largely privileged audience of straight white men for having humor that spares no one.

By this, they usually mean that the humor attacks everyone. This is a deceptive issue because it acts as though the things the shows find humor in are equal – when anti-Semitic, racist, homophobic and transphobic slurs should never be normalized, much less treated as equal to other forms of humor or haggling.

It should be obvious why this is an issue, but, in case it isn’t: making bigoted jokes humorizes and normalizes systemic oppression. Acting as though you are attacking all people equally through humor does not hold water when bigotry is predicated on unequal and dehumanizing behavior.

I was afraid “Bojack Horseman” was going to fall into the same tropes and that I would end up disgusted.

Recently Netflix uploaded the latest season, season five, for the show, so it started showing up on my feed. This coincided with finishing up the other shows I wanted to watch.

I reluctantly began the first episode and found myself not disgusted. Sure, it felt fairly stereotypical in its portrayal of masculine debauchery, but I wasn’t put off enough to discontinue.

I found myself caring more about the characters than I expected. I sympathized with them. “Bojack Horseman” impressed me in several ways, one of which was how they let the characters grow and develop in complex ways that felt completely natural.

For example, Bojack Horseman’s unbalanced friendship with Todd ends about midway through the series. Rather than forcing them to directly repair their relationship, the show continues to include Todd in the main cast and treats him with respect.

Although the show is called “Bojack Horseman,” the other main characters – Todd, Princess Carolyn, Diane and Mr. Peanutbutter – do not fade into the background. While the show certainly brings humor into their respective lives and issues, such as when Princess Carolyn unknowingly dates a man who is clearly just three children in a trench coat, it knows when to not satirize.

For example, Todd’s character hints at sexual repulsion fairly early on in the series. It struck me as somewhat asexual, but I didn’t think the show would do anything with it – except it did. Todd eventually comes out as asexual, joins an asexual community and begins navigating the complicated realm of dating without experiencing sexual attraction or desiring sexual encounters.

Despite Todd being a humorous character, particularly due to his whimsical and wild ideas, his asexuality is never treated like a joke. Even Bojack, a depressed and jaded actor who frequently does not treat people with the respect they deserve, does not mock Todd’s explicit asexuality.

Season five, the latest season, has Todd further exploring his asexuality and coming into conflict with his childhood friend. Despite wanting to date her, and her wanting to date him, her sexual appetites and his lack thereof put their prospective relationship into jeopardy.

It was amazing to me to watch the show, which frequently incorporates raunchy humor and navigates morally squeamish waters. One such event was when Bojack nearly engaged in underage sex with the daughter of an old love interest – right after he tried to get her to leave said daughter and her husband, and they were still able to have serious discussions with amazing respect.

Of course, season five being the newest season, it dips into other topical issues, such as #MeToo. It also deals with Bojack’s depression and anxiety, impacted by his dysfunctional childhood. Diane grows from a young ghostwriter, eager to do good in the world, to a jaded writer for a feminist Buzzfeed-lookalike. Princess Carolyn deals with being a complicated workaholic in her forties while wanting children.

Bojack Horseman is still a show about complicated people and animals. It balances depicting obviously complicated characters and their actions with making them complex and even at times sympathetic – without trying to justify their mistakes. While characters, like Bojack and Sarah Lynn, deal with their depression and/or anxiety in unhealthy ways, the show does not blame mental illness for poor decision making.

I didn’t expect to enjoy “Bojack Horseman” as much as I did, but it is definitely a show I will happily rewatch. I entered with low expectations and exited craving more. If you like shows like “It’s Always Sunny In Philadelphia,” I think you’ll enjoy this too.

I’m excited to see what happens in the future season(s) for “Bojack Horseman!”