William Jewell College’s Athletic Department, chaired by Dr. Darlene Bailey, includes 400 student athletes, 20 teams and, from the 2012-2013 season, a total revenue of $5,972,533 according to the Equity in Athletics Data Analysis Survey (EADAS).

“[The Department of] athletics generates more than half of its operating budget from revenue sources,” Bailey said. Some of these sources are ticket sales, athletic facilities rentals on campus, concessions and money from conferences. Each team is expected to fundraise a certain amount; these funds go to the operating expenses for that team. However, “if someone gives money to a program, it goes to offsetting that fundraising goal,” Bailey said. According to EDADS, approximately $200,000 is given to different athletic programs from private donors, who have the option of specifying to which program they want to give funds.

Operating expenses are different than the total expenses for a team. Operating expenses only include expenses accrued by teams when they travel for away games, the cost of officials and the cost of equipment for the team, coaches and support staff. According to the EADAS, the total expenses for a team include “appearance guarantees and options, athletically-related student aid, contract services, equipment, fundraising activities, operating expenses, promotional activities, recruiting expenses, salaries and benefits, supplies, travel, and any other expenses attributable to intercollegiate athletic activities.” For the 2012-2013 season, head coaches for men’s teams were paid on average $28,431, and for women’s teams, $16,333. These numbers do not include any other salaries individuals accrue through other positions for the College that they hold, as no William Jewell coaches are assigned to a team on a full-time basis.

The amount of athletically-related student aid, which can be found in the form of an athletic scholarship, is determined by a number of factors and is included in the amounts of total expenses. Coaches can give athletes a certain amount of money in the form of aid which is dictated by the amount of money the team receives. This number is determined by an equivalency limit set by the NCAA for each team. The limit is equal to the value of a college’s tuition, room, board and books. Each team is assigned an equivalency limit that is proportional to the size of the team, and coaches use this number to distribute scholarships to their athletes. Because of the equivalency limit and the academic scholarships most Jewell students receive, “the number of student athletes within our program on full-ride athletic scholarships is very small” Bailey said.

The Equity in Athletics Disclosure Act (EADA) was passed under the Higher Education Opportunity Act in 2008. According to the U.S. Department of Education, the EADA’s purpose is “to prepare an annual report to the Department of Education on athletic participation, staffing, and revenues and expenses, by men’s and women’s teams.” Because the College fits the requirements of postsecondary educations with an intercollegiate athletic program, William Jewell is mandated to report the expenses and revenues of the athletic teams. The Department of Education uses this information to report to Congress about gender equity in athletics. The College uses this information to ensure that gender equity is being met on campus. Gender equity is taken into consideration when budgeting for the team’s expenses for a particular season. “We budget equitably, but that doesn’t necessary mean that it’s equal in dollars,” Bailey said. 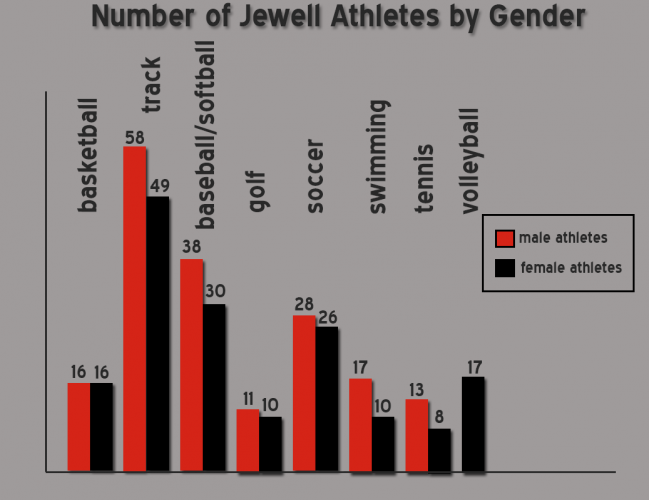 However, the College does have  ways of ensuring gender equity is found in the athletic department in place.

“We have an intercollegiate committee made up of faculty members and others around the College” Bailey said.

Dr. Andy Pratt is the chair of this committee. The main role of this committee is to review the expenses and do a study of gender equity issues in Jewell’s athletic department every three years.
“Athletics brings 400 students, which is 40 percent of our student population, and the tuition revenue generated from those students helps run the whole college. It doesn’t just work for athletics” Bailey said.

The EADAS for the 2013-2014 season was submitted by the College on Oct. 15th and will be available to the public in the near future.