As William Jewell College students were enjoying the last few weeks of summer break, the finishing touches were being placed on the updated Campus Safety policy for the 2018-2019 school year. The updated policy was made available to students and faculty in an email from Landon Jones, Campus Safety Director, on Aug. 7.

In the email, Jones informed the Jewell community about the upgraded locks on classroom doors that can be locked from the inside with a push button or lever lock, summarized campus trends including a recent increase in vehicle thefts and identified actions everyone can take to deter theft on campus.

One area of the new policy that students should have no problem buying into is vehicular theft prevention. According to KCTV News, Kansas City had more car thefts than any other city in Missouri in 2017. The number of car thefts in the metro area increased from 7,800 in 2016 to more than 9,700 in 2017. Additionally, KMBC News reported that car thefts have risen 25 percent in the Kansas City area.

“People have realized that cars are kind of an easy target,” said Jones. “It really only takes a couple seconds to open a car door, look in the glove box, grab some cash and leave.”

Nathan Wasson, sophomore Oxbridge: History of Ideas major, gained first hand experience with vehicular theft when his car, a 2002 Acura RSX type S, was stolen from campus last November. Wasson suspects that the make and model of his car contributed largely to the theft.

“[The car] is prized among a certain community of people,” Wasson said, adding that his car was locked when it was stolen, possibly indicating the thief knew the car’s value. 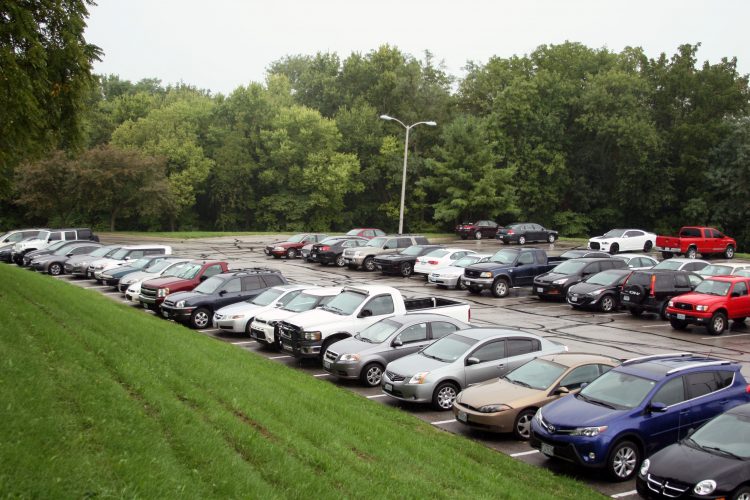 An overview of the cars in the “Sahara,” a lot where most William Jewell College students park.

Wasson’s experience may be an outlier, but his story is a reminder to the Jewell community that our campus is not immune to car theft, and that it is more important than ever to keep car doors locked and store valuables out of sight.

“The reason for that is to deter people who would [steal a car],” explains Jones. “We want them to see that we patrol and go maybe somewhere else.”

The updated policy also included the launch of the See Something, Do Something campaign, which endeavors to make students more aware of various resources on campus–one of them being the new anonymous hotline.

“There’s only so much that I and the officers can do, but we have a thousand people who live and work [on campus] so that’s a lot of eyes, that’s a lot of ears. [Just] having everyone else brought in is incredibly effective,” Jones said.

“[The campaign is all about] getting people engaged in their own safety and [encouraging] people to, if they see concerns, to take action directly,” Jones said. “[Jewell is] a very caring community and I think the See Something, Do Something campaign carries that forward.”

Jewell students may have seen the See Something, Do Something posters around campus. The posters contain helpful resources such as the contact information of various offices that can provide assistance related to sexual assault, safety, security and student conduct. The poster also contains the number of the new anonymous hotline.

Samantha Fulte, senior biochemistry major, shared that the idea for the anonymous hotline came partly from the students and faculty of the Diversity Education Work Group (DEWG).

“Our first goal was to develop a Bias Incident Response Plan,” Fulte said. “[The anonymous tip line] was a way for people to report incidents of bias on campus.”

Fulte said that DEWG also intended the tip line to acquire information about safety at Jewell. “Just because our annual campus safety report says that there were 0 instances of X, doesn’t mean that X is not occurring,” Fulte said. Ultimately, there is potential for the anonymous tip line to fulfill both of these uses.

“[We want to] make it as easy as possible for people to report something,” said Jones. “Getting those reports of concerning behavior is so important to preventing tragedies.”

Beyond the new portions of campus safety’s policies, it is still important for students to lock their dorm rooms and avoid leaving doors propped to the residence halls.

“When you prop a door you [compromise] security for everybody else in that building,” Jones said.

“I do think Jewell is a safe campus,” said Stufflebean. “However, I also think that safety poses our greatest challenge. We’re not immune from crime, and opportunity exists because we let our guard down.”

Ways for students to report concerns and get support: