After serving for 16 years at William Jewell College, President Dr. David Sallee and Mary Sallee are retiring. “The Hilltop Monitor” had a chance to sit down with them to discuss Jewell’s past, present and future. David’s responses are denoted by DS, and Mary’s, MS.

What was a Jewell memory you found yourself thinking of today?

DS: Senior dinners are an important memory for us.

What are your hopes for Jewell’s future?

DS: I think [Jewell] is a much more open and welcoming place than it used to be, and I’d like to see that continue as well.

DS: Well, first, just to be remembered. We’re going to be old news really fast. But I think, just in a way of people feeling like it was a good period of time, that it was a positive period of time and that the college improved in whatever ways it improved.

MS: My hope would be that I would be remembered for fostering community. There are a lot of college campuses where there’s a real “us” versus “them” [mentality]. I don’t feel that kind of push back from students towards the administration at William Jewell, or the faculty towards the administration. And I would like to think that the things that have happened, not necessarily because of us, but the things that have happened since we’ve been here, have helped promote community. One of those things, for instance, is Jewell Time. That’s not always been here. If you think about that moment on Friday mornings where the wholecampus can gather, where the whole campus can recognize a pocket of excellence [at the College], that’s a great thing that fosters community.

How have you both changed since your time here?

DS: Probably would handle structure a little differently, [such as] structure with boards, structure with senior leadership at the College. Might have built things a little differently. Probably would act quicker on some things than when I did it, but you always look back and say, “I should have done this or that.” It’s a lot easier in hindsight than it is in the moment. But I think one of the things I’ve learned is to move more quickly than what I did at times.

What accomplishments are you most proud of here?

DS: I mentioned earlier being a more open and welcoming place. I think that’s a very important part of the institution now. In terms of things that happened, the integration of technology at a high level into teaching and learning. That would include the Pryor Learning Commons and Jewellverse. I really like the Journey Grants program, and getting an addition to the Union built and then Shumaker, in terms of physical changes.

MS: That also had cultural impact. Think of your lives if you didn’t have that space in the Union or the space in the PLC, it would be different socially, culturally. So many differences in the way you do what you do. Those things don’t really feel like accomplishments, because it isn’t just one person doing them. Those are things that happened, but there’s a whole community working to make them happen. So that’s a hard question to answer.

DS: So things that were done while we were here or things that have changed, I put them in that category.

What advice would you like to give to future student leaders at Jewell?

DS: The main thing is to participate, to engage. Not to sit back and assume that you don’t have any influence. Students should not feel like they are not empowered. Students should remember that you all change things by being here, in the same way we change things by being here. So you shouldn’t get to the end of a career and say, “Well nothing happened,” because as you look back you’ll see a lot of things that are different, and they’re different because of things you all did in one form or another. Whether it’s cultural change or something else. So you all are influencing the life of the College every day just like we are, sometimes it just doesn’t feel that way. 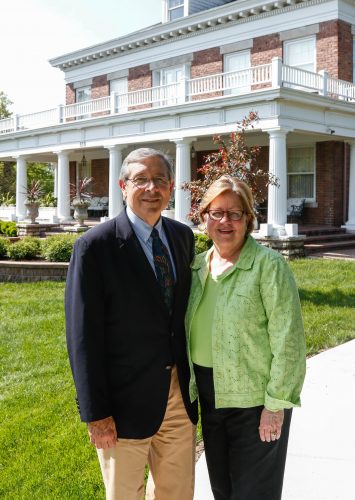 What drew you to Jewell 16 years ago?

DS: We’d always been at places like this, 40 years in higher education. 17 years at one place, Oklahoma Baptist University, so a very similar place in many ways, seven years at Luther College, a very similar place in many ways. So it was the kind of place that we were comfortable in, and the kind of place where our philosophy fit. Beyond being the right kind of place, we knew a lot about Jewell because our son was a ’99 graduate of the College. Beyond that, it was a presidency. So if you want to be a president you take the presidency, when it comes along.

What was the most impressive thing you’ve seen a group of students do?

DS: I think that goes way back to the Missouri Baptist Convention situation. Because all that started with student conversation, it wasn’t a College conversation. Students handled that really well, and then it became a really difficult issue. It started as, “Hey we’re in Student Senate and we’re talking about this and I have an amendment,” and suddenly it was Channel 9 and Channel 5 and the Missouri Baptist Convention and Kansas City Star. It became something that was bigger than it started out as, but they handled it really well. How they handled all that was the most impressive thing.

MS: I think in general, what you as students do think about, recognize, value, is impressive. The words “leadership” and “service” are an integral part of every organization on campus. Those words are woven into every organization’s mission. It changes who you all are, because that’s language that pervades the campus.

DS: I think there’s sincerity to that here that isn’t necessarily true in lots places. A lot of those kinds of things end up becoming resume builders in a lot of places, but there’s a feeling here that we’re actually trying to help.

Has there been something, such as a person or book, that has impacted your leadership?

DS: It probably changes over time. It’s a collection of people, places, things, experiences and circumstances that go together. And I think there’s frequently more credit given to intentionality and less credit to luck than should be [given]. And I say that partly because there are things in our experience that turn out to serve us well here that we had no idea back when it happened. One of the truths that you learn, a lot of people will say if they’re in a leadership role, “I don’t care if people like me or not, by golly, as long as they respect me.” I happen to be at the other end of the spectrum. I think if they like you, you have a much better chance of getting things done than if they don’t like you. People are so influenced by who they like, what they like, that is a very important piece of effective leadership.

How are you feeling about leaving?

DS: It’s a mix for me. There are days when I would say, “I don’t want to go. I need to keep going, I need to stay here.” There are other days when it’s very clear, “Nope, this is the right thing, the right time, exactly the right thing to do.” The challenge is those aren’t really predictable responses.

Tell us a funny Jewell story.

MS: I remember at one senior dinner a woman feeling like she needed to confess all of the places she’s been where she wasn’t supposed to be. So she sat there at the table telling us all the rooftops she’d been on, the attics she’d been in, all those kinds of things. It felt like a confessional.

Have you ever seen someone climb onto the roof of the Union from your house?

DS: Yeah, I was on the front porch one day in the spring—because people do stuff in the spring they shouldn’t do—and there were two women on the roof of the Union. Being on the flat roof is one thing, but then they were up on the other roof where it’s tilted. What are you doing?! It’s crazy. How much better can the sunbathing be on the Union than on the ground?

DS: It’s been great. It’s been a lot of fun. You do tend to remember the fun stuff and the good things. The bad things tend to recede in importance over time. That’s certainly the way it is for us.

MS: It’s like childbirth: you forget the painful parts, you just remember the glorious parts. You remember profound things students have done and the way they make us look differently at our jobs because of all the efforts they are putting out. It’s just been a real privilege.

PreviousPrevious post: Records Are Made to Be Broken
NextNext post:Photo Feature: In Full Bloom