Jake Williams, William Jewell College Oxbridge Institutions and Policy alumnus, had a lifelong dream of serving the United States. Raised with military parents, he personally witnessed the sacrifices and commitments service members make. He eventually realized that he was best suited for a job that involved traveling, helping U.S. officials and foreign civilians alike and fostering relationships with other countries.

Although Williams knew he wanted to work in public service from an early age, he said the events of Sept. 11, 2001 piqued his interest in the Middle East and studying Arabic, which he began at Jewell and continued after.

“It’s a whole long-term path, but Sept. 11 stands out,” Williams said. “I specifically remember where I was and what I was doing.”

Williams’ father was in the Air Force at that time, stationed at the base President Bush arrived at after the attacks. Because Williams lived in a military community in tune to the state of the nation’s safety, the events held significance to everyone around him. He said he knew from that day that things were never going to be the same, and he wanted to do something about it.

Jake Williams had a dream of joining the United States Foreign Service, and he failed.

The process for becoming a Foreign Service Officer is extensive. The selection process is merit-based, beginning with standardized testing, essays and an oral interview to identify the strongest candidates to represent the United States overseas. Williams’ first attempt was in 2009, after graduating from Jewell. He tried again a couple of years later, while in grad school, and did not pass. Still, he persisted.

“I learned the values of persistence and patience, but now I’m getting to do what I’ve always wanted to do, and I think I have the coolest job in government,” said Williams.

Williams was first assigned to Saudi Arabia for two years. During his first year he worked as a vice consul, spending hours daily behind bulletproof glass interviewing 80 to 100 potential visa recipients requesting permission to travel to the U.S.

Williams spoke to people who sought travel for tourism, education, employment and more. His afternoons consisted of the administrative work such as approving and rejecting visas and filling out paperwork. Depending on the person and their reason for travel, the process could become very complicated.

He also worked in the fraud prevention program during this first year, investigating visa applicants presenting fake visas or false documents of any kind. He said those investigations, while time-consuming, gave him a sense of importance because he helped to maintain integrity in the immigration system.

“[I] made sure people were being honest, making sure that people are coming to the United States for their stated purpose,” Williams said. “It was a lot of fun.”

During his second year, Williams worked as a Public Diplomacy Officer. On a typical day Williams arrived an hour before anyone else in the U.S. Embassy; he collaborated with local Saudi Arabians to read local newspapers, social media and check Saudi television, in order to prepare a news summary.

This was sent to hundreds of people across the two consulates in Saudi Arabia, the embassy and Washington D.C. This allowed recipients to begin their days with an understanding of the current events occurring in Saudi Arabia and what Saudi news outlets were saying about the United States. 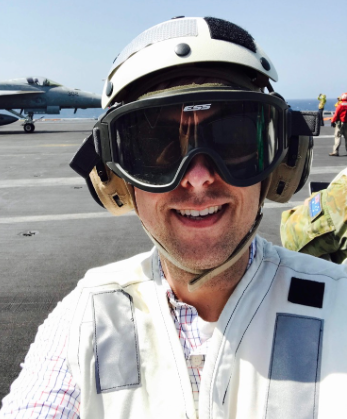 Jake stops for a selfie on the flight deck of the USS Nimitz, October 2017. (Jake Williams)

“It’s important because we need to keep a pulse on a whole range of issues in the country that we work,” Williams said. “Security issues, trade issues, cultural issues and by looking at the media, we can see what a country has to say about itself, what they think is important [and] what they think is newsworthy.”

“It’s also important to look into the media to see what they have to say about the United States and the policy we’re trying to implement in whatever country we’re working in,” Williams said.

Williams also facilitated communication with all foreign partners, not just government officials but the general public as well. He helped to set up social media, press conferences and public events, and he also prepared ambassadors and embassy officials to give interviews and communicate on a number of topics.

“[Working in the press office] keeps you very busy,” Williams said. “Because news can break at any time, and we have to monitor the news 24/7, sometimes you’re working after hours to provide people in the embassy information about something that happened overnight. Sometimes you’re working with Washington to answer questions that they have, and there’s an hour’s time difference.”

According to Williams, a successful career in the Foreign Service could last 20 years. Political climate and policy will change in that time, but Williams said the work of the Foreign Service does not. It is the responsibility of the State Department to help any official visiting, regardless of administration.

“Foreign Service Officers, like me, serve the government regardless of administration, and we check our politics and our personal feelings at the door to carry out the oath that we took to the Constitution and to serve the United States,” Williams said.

Williams remains active in the Foreign Service and hopes to for a very long time. He has already started on his next assignment, that will again last two years. Williams noted that the length of an assignment depends on its location and the officer working. Newer officers usually receive two year jobs, regardless of location.

As an officer progresses through the mid and senior levels of the Foreign Service, they gain flexibility in their length of assignment and are trusted with more difficult assignments in places like Iraq or Pakistan.

Williams encourages anyone who is interested in public service to consider the Foreign Service. He loves the travel and the opportunities to gain knowledge about other cultures and complete valuable work that aids the U.S. and the world. He mentioned that there are internships and fellowships to aid in the application process, and the website for the Foreign Service is a great resource for information.

Williams wants to make sure all students know that their dreams are within reach. It took him years of setbacks and difficult work, but he is now living his dream.

“My advice to any student interested in the Foreign Service or not is to stay persistent and come up with a long-term plan to get you to your goals,” Williams said. “When you’re making your short-term decisions, think about how they’re going to get you closer and closer to your long-term goal.”