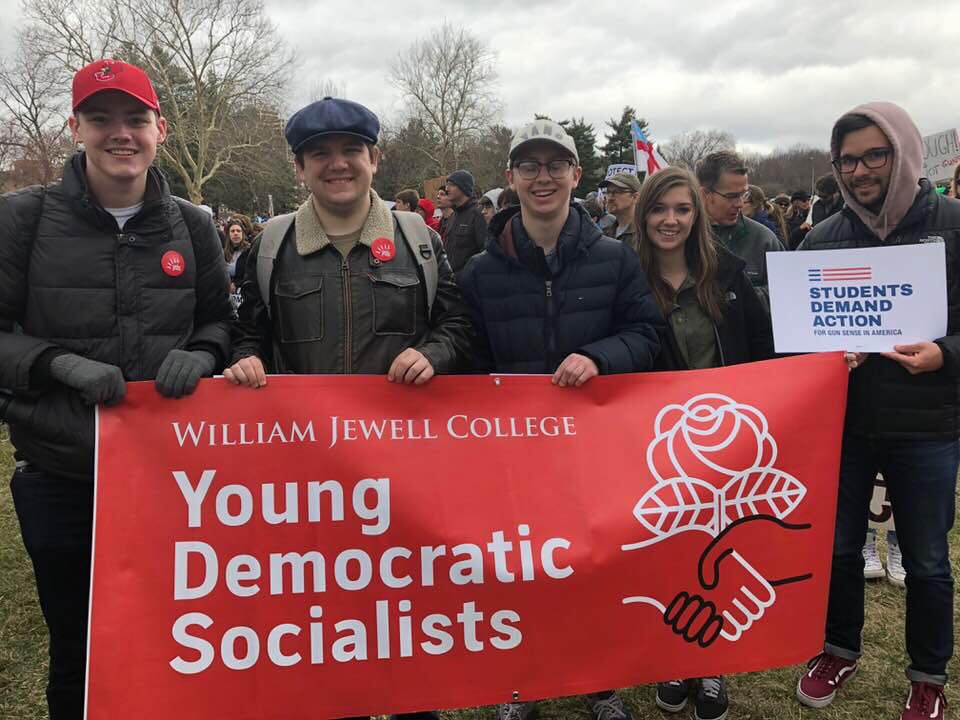 William Jewell College’s YDS chapter at the March for Our Lives event in Kansas City, March 2018.

Brendan Davison, junior political science major and vice president of the club, started the club when he first came to Jewell.

“I had previously started a Young Democratic Socialists group in high school, and when I started here in fall 2016, I quickly realized there was no real outlet to agitate for socialist ideas on campus, and the overall political scene on campus seemed to be too focused on the election cycle. So I started YDS to spread Democratic Socialist ideas and to try and encourage people to get involved in politics year round not just during elections,” said Davison.

“Both the government and the economy should be structured democratically to meet human needs,” said Davison about the democratic socialist position.

Although the club is centered around the Democratic Socialist belief system, Timothy Wise, senior communication major and club president, believes that other political voices would benefit from and are welcome to join in the club’s conversations.

“People who have different political beliefs would be welcome to attend and, I believe, would benefit from joining. A lot of what we have done in previous years has been more organized around political action, so organizing people to attend protests, organizing them on campus and addressing specific issues on this campus that we find important. In each case, we want to be open to the community and welcome everyone to participate in a way that they want,” Wise said.

YDS meets on Thursdays at 7:30 p.m. on the third floor of the Pryor Learning Commons when weather and member schedules permit.

“An average meeting usually covers any updates from previous events, motions for new discussions, proposals for new events and opportunities to attend events in the area, and then a discussion about an important issue or reading that is sent out beforehand,” said Wise.

The club had a few events this fall semester, including an educational event about two 2018 ballot initiatives that featured guest speaker Alejo Gonzalez, an expert on Amendment 1. They also recently screened the documentary “Hypernormalisation,” a 2015 film that attempts to explain a few important contemporary political events and crises like Brexit and the War in Syria.

Although the club does not have any events scheduled for the rest of the semester, Wise assures that there are plenty of events planned in the spring.

Wise invites anyone interested in attending meetings to join YDS’s email list so they can stay informed about meetings and club events.