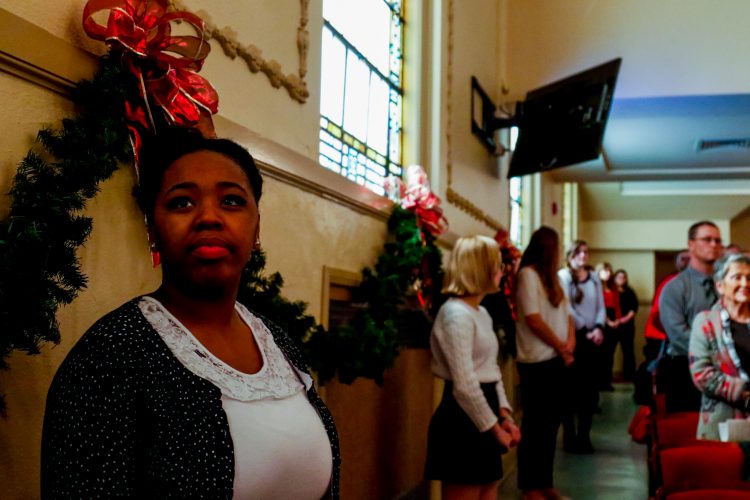 Personally, I’m not one for ritual or an extreme amount of forced holiday cheer. Call me Scrooge, but I don’t really enjoy singing holiday carols just because they are on a program or a monitor tells you to stand up and sing. That being said, I think the Hanging of the Green is a good event to attend at least once while you’re at Jewell. This year is the first time I have gone, as a sophomore, and while I don’t plan on attending another one, I feel all Jewell students should at least experience it once.

Maybe in the future, if I’m in the Kansas City area, I would come back as an alumnus with my children so that they could experience Santa pelting them with candy, but as a 19-year-old I feel it was more ritual and forced fun than an actual outlet for holiday spirit.

The Lighting of The Quad is one of my favorite events at Jewell, and not just because I’m crazy about Christmas. I was overwhelmed as a first-year student when I attended my first one. As I walked into Gano Chapel, I struggled to find a seat. This may be because I arrived at the event exactly at 7 p.m., but it was also a result of the massive number of Liberty residents who had decided to join our school for this event. I finally found a seat in the balcony to watch the choir and band perform, but little did I know what I was about to experience. While the whole performance was slightly less than perfect, the finale really drew me in. As a result of holiday magic, it began to snow during the final song. But much to my dismay, the snow was not falling outside. Instead, fake snow was being blown from the rafters of Gano Chapel. I still regressed to my five-year-old self as I became filled with a little more holiday cheer.

As the audience filed out to the Quad for the actual lighting ceremony, the energy radiated. Santa was on the roof of the Union, and more carols were being sung on a makeshift stage. However, I was slightly disappointed by this ceremony. Having recently attended the Plaza Lighting Ceremony in Kansas City, Jewell couldn’t hang. I recognize that Jewell is no Plaza, but there was no build up to the flipping of the switch. I at least expected a countdown. Instead, I just got a sudden switch on and people struggling to clap without dropping their candles and catching the Quad on fire. Maybe this year will be better now that my expectations aren’t as high. Maybe this year will be better if I get over my fear of holding candles and join the rest of the community. Maybe this year will be better because I’m so much more in love with Jewell and the people that come with it. 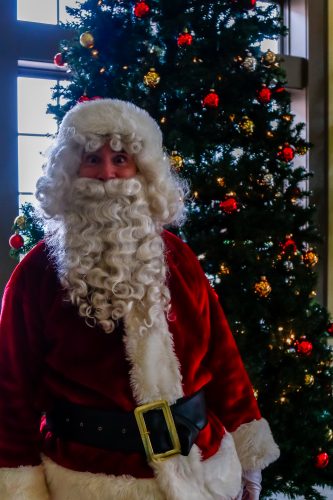 Photos with Santa occur during the reception after Lighting of the Quad. While Jewell students and children from the community crowd the line, it is a reminder that you are never too old to tell Santa what’s on your wish list. Last year I was wishing for at least an A- in “Music Theory.” However, after ridicule from my brother, I had stopped believing in Santa by the age of eight and decided that my 20th Christmas was no time to start believing again. So last year, as I was walking around the reception taking photos, I discovered that Santa was more British than I had thought. In the end, the jolly ole Saint Coleman probably could have performed a Christmas miracle for my GPA. Alas, this year will be different.

This year I will be the photographer taking photos with Santa, and I may be more excited than I ever was as a child. I get to take photos of community children meeting Santa and telling him about their Christmas wish lists. What could be a more precious and innocent human interaction? Also, when taking the photos, I will get to witness my classmates become children again and tell Santa what is on their wish lists. However, I’m more interested in which Jewelligans made it on the naughty list and who are nice. Surely Santa can grant a few of our wishes and cancel finals week. Or perhaps that’ll take a few gifts of milk and cookies sent to the music department.

Every year, Dr. and Mrs. David Sallee open up their home for a Christmas party for the Jewell community. According to Mary Sallee, decorating begins right after Homecoming, starting with the upstairs rooms. Rosa Langston, the house manager, helps Sallee decorate. Sallee decorates all the trees, making many of the ornaments herself. Langston does centerpieces, mantles and the stairway, ensuring that there is greenery to be found in every room. No corner of the house is left without a bit of holiday cheer. 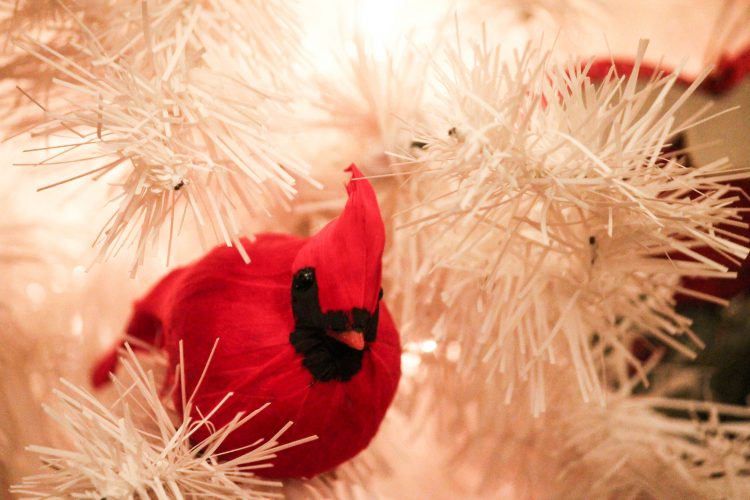 There is always a theme for the open house. This year the theme is “Cardinal Is Her Color.” Attendees will see the theme represented throughout the house by the presence of the color red and many cardinals. The birds can be found nestled in any of the 30+ trees, clustered next to poinsettias, on the tableware at the dinner table or even in a nativity scene complete with a cardinal baby Jesus.

In addition to snacking on holiday food, singing along to Christmas carols and admiring the decorations, attendees can participate in the hide-and-seek game. This year mini cardinal ornaments will be hidden throughout the house.

The Christmas open house tradition began with the Sallees. The rationale for the open house reflected the same thinking they used for Jewell Time.

“We recognized that there is always a cultural tendency for members of a community to gravitate, in any social setting, to their most-comfortable place. Unfortunately, on a college campus that often translates into the ‘silos’ that come with the designation ‘Faculty,’ ‘Staff’ or ‘Student.’ We saw this as a simple way to erase some of the lines that define the potential silos and bring everyone together in a festive moment,” said Sallee.

Sallee reflected on her favorite part of the event.

“Just as your mom or grandmother want the entire family at their table for Thanksgiving dinner, I love having my ‘family’ together at the Christmas party. It gets a little crowded at times, but I love having as many of us as possible sharing a festive moment,” said Sallee.

Features editor Brianna Steiert reflected on her experience at the Sallee’s last year.

“I absolutely loved the Christmas party last year. As a first-year student I was hesitant about going, but I am so glad I did. Last year the scavenger hunt revolved around the many nativities in the house. It was nice to be able to walk around their home admiring all the decorations and counting the nativities while snacking on some cookies. I was amazed by the number of people that attended, and I enjoyed the overall merry atmosphere of the event. I would encourage everyone, especially first-year students, to attend,” said Steiert.

“I was not able to go the event last year as a first-year and was so sad I missed it. However, that makes me even more excited to go this year. I’m also sad that the one time I get to go is the last time the Sallee’s will be hosting it but I hope that this tradition will be continued in the future,” said Neth.

While some may think it appropriate to play Christmas music before Thanksgiving, we can all agree that the holiday spirit on the Hill would not be the same without the hard work of the campus musicians. From the jazz band to different choir groups to Liberty Symphony Orchestra, music is one of the best parts about celebrating the holidays with your Jewell family.

Matt Rosado, senior physics and mathematics major, is a member of the Jewell Symphonic Band and plays the tuba. He reflected on last night’s performance at the Lighting of the Quad.

“What I enjoy the most is the audience. It is huge during this concert, bigger than any other performance we put on, so we take it very seriously. Gano is filled, there are decorations everywhere, and of course the surprise we save for the first years. The fake snow definitely sealed the deal for me because it just makes the whole chapel feel incredibly festive,” said Rosado.

If you missed last night’s performance, you can hear faint twinklings of holiday music in the Union and the PLC.

William Jewell College’s CUA’s Winter Formal is one of my favorite events of the Jewell holiday season. We have many traditions here, but there’s nothing like getting dolled up and eating yummy, free food to get you into the holiday spirit. As an independent, I have limited opportunities to get to dress up and go to dances, so I am always grateful when CUA holds events at which I can do these things. Winter Formal is a time when all Jewell students can come together and celebrate the holidays, regardless of their different affiliations. As a free event at fancy locations, Winter Formal has always given me the chance to dance and eat the night away with my friends and fellow Jewelligans in a beautiful room that I rarely would have had the chance to be in otherwise. I cannot wait to attend this year’s Winter Formal, which will be held at Crowne Plaza Hotel at 9 p.m. Friday, Dec. 11. The Crowne Plaza Hotels has a beautiful view of Kansas City and plenty of room on the dance floor, so I’ll see you all there!

Sometimes, when the harsh Missouri winter actually hits and the College is coated with a beautiful layer of powdery snow, students take the opportunity to appreciate the seasonal campus. For some, this means donning an unusual level of sneakiness, repurposing a tray from the caf and sliding at full speed down the hill behind Browning, more appropriately known as Browning Bowl.

If the excitement of speeding uncontrollably on a coat of icy snow toward a winding hill of a driveway that people treat like a racetrack just does not quite do it for your adrenaline fix, just remember that you get to temporarily borrow something, too. I recall a sweet day my first year when a close friend tried walking out of the caf as inconspicuously as possible while holding a surprisingly bulky tray. He was subsequently chased down by one of the staff members.

If we get blessed with snow this year, I hope to see you all committing crimes and taking risks because it will be worth it just to say that you participated in one of Jewell’s highly logical and cool traditions.