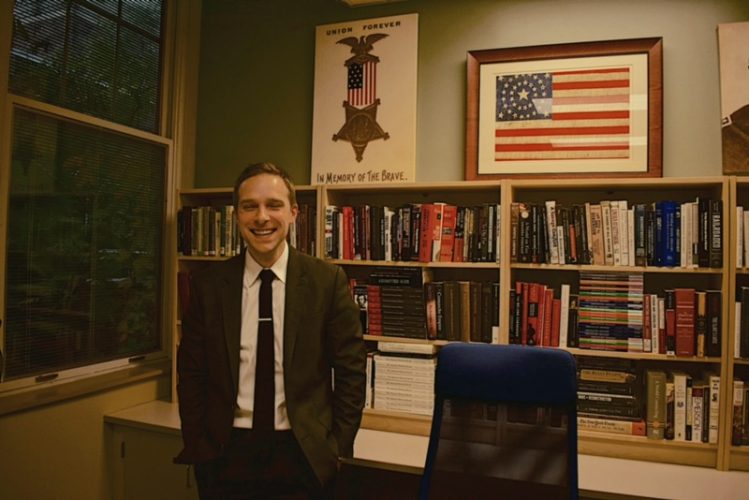 Wilkins in his office.

The Hilltop Monitor sat down with Dr. Christopher Wilkins to discuss his background and love of history, his experience teaching at William Jewell College, his favorite presidents, traveling and Game of Thrones.

Wilkins affirms that he enjoys teaching all of his classes, but his U.S. foreign policy course is his favorite.

“I think that the U.S. foreign policy class so far has been my favorite because it was what I focused most of my attention on in graduate school. While I enjoy learning about a wide variety of other topics in American history, that is sort of where my heart lies – what I’ve studied from undergrad up to the present,” said Wilkins.

Wilkins earned his bachelor’s degree from Duke University, his master’s and doctorate from Stanford University and spent a summer studying at Oxford.

Wilkins discussed that during his time in undergraduate and graduate school, he was initially uncertain of whether to pick a career path in government and Foreign Service or one in academic life as a professor. Ultimately, it was his first-hand experience of instructing and helping students that produced a love of teaching.

“Through the beginning of graduate school I came in and knew that I really enjoyed studying, thinking about and writing about history, but when I started teaching – that’s when it really became clear to me that I wanted to become a professor. The experience of watching my students understand the world in a new way was really powerful and rewarding, so I did that as a graduate assistant and then as an instructor at Stanford. Then when the job at Jewell opened up, and I was fortunate enough to get the job, I found that I continued to enjoy it even more,” Wilkins said.

Wilkins holds a deep appreciation for the study of history and believes that understanding the past and present as a combined outlook is crucial for shaping the future. He discusses his opinions on why studying history is instrumental for current students.

“I think that if you are interested in reforming a country or society or some kind of institution and if you want to get things done and work successfully and efficiently it really helps to understand the past of that society or country or institution. I think it can also provide lessons over things you might want to avoid or embrace, and I feel that’s particularly relevant for an American citizen these days given the current political climate that we live in,” he said.

Though Wilkins studies a span of history, he shared the niche of history he particularly enjoys.

“I started off with interest in mainly the American Civil War and its Reconstruction. Then I had moved more into finding more U.S. policy in the 20th century fascinating – especially in the era of World War II and the Cold War where you see this huge transition from the 1930s, when the U.S. was primarily an isolationist country, to assume the role of global leadership. After the Cold War and these days, we see something of a retreat from that. I think it’s intriguing to go back and look at the arguments that people made that propelled the U.S. global leadership to that and the arguments that people are making these days to try and take a step back from that and promote an ‘America first’ policy,” said Wilkins.

“I think Grant is certainly amongst my favorite presidents. I think he was a virtuous and honorable man, if we are looking at three people who made the continuation of the experiment of American democracy possible – during the first 80 years of American history – it’s Washington, Lincoln, and Grant. As brilliant of a leader as Lincoln was, you still needed someone to win the war, and Grant was ultimately the general who was able to get that done. I think that without Grant, the Confederacy would have won the war which would have had all sorts of terrible consequences for the world. Grant was a really strong leader of civil rights during Reconstruction in a way that a lot of people don’t appreciate,” said Wilkins. “Then… FDR, if you look at the profound nature and danger of the challenges that he faced and his ability to get the United States to get through both the Great Depression and World War II, it represents a truly astonishing feat of leadership.”

When Wilkins is not teaching a class or grading our historical research papers, he spends time with his family and attempts to travel with them as much as possible.

“I like spending as much time as I can with my daughter and my wife – family time is what really matters to me. As well as traveling, my wife and I go over to Europe to visit her family every year. It was really cool because we got to take my daughter to Bosnia, Croatia and Austria this last semester, and it was really enjoyable,” Wilkins said.

Wilkins considers Dubrovnik, Croatia, as one of his favorite cities. Dubrovnik, with its stunning views of the Adriatic coast, was where Wilkins proposed to his wife. Additionally, as a Game of Thrones fan, Wilkins finds Dubrovnik particularly interesting as some of the show was shot in the city. Wilkins highly recommends taking the GoT tour.

“I took the tour! It was incredible; you see where King’s landing is, you see where the Battle of Blackwater was shot, you could see from afar the area where the fight between the Mountain and the Viper took place. It’s incredible. We [Wilkins and his wife] walked up the steps where Cercei did her walk of shame,” said Wilkins.

For Wilkins, securing his position at Jewell to teach history in a liberal arts environment has overall been a highly beneficial and welcomed opportunity.

“Especially with academic jobs, tenure track jobs are so rare that to have one open up in Kansas City at a great school like Jewell where I could teach in a liberal arts environment – and teaching is really what I enjoy doing – it was just so fortunate.” 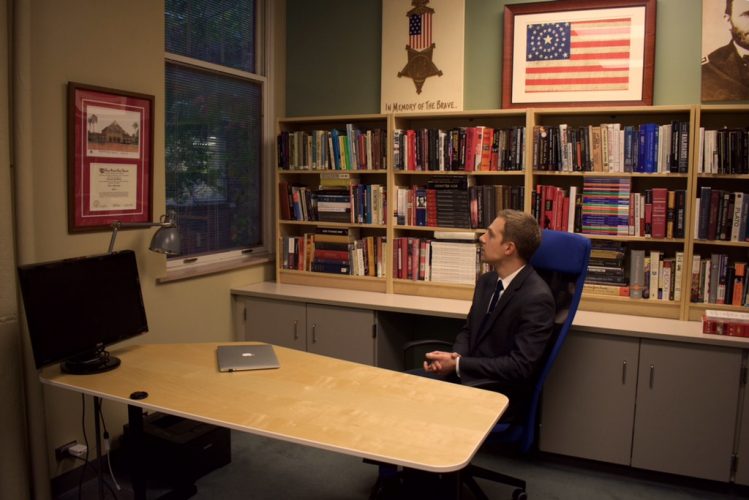