Campus Union Activities (CUA) invited self-proclaimed “extraordinist” Craig Karges to perform for an audience of roughly 300 students in Gano Assembly at 8:00 p.m. Aug. 20. This was CUA’s first event of the 2018-2019 school year. Karges, who is, according to his website, an award-winning entertainer, a nationally recognized speaker and an author, filled his one and a half hour long set by performing a series of illusions.

Karges began the night in front of a whiteboard that listed the 26 most commonly used words in the English language. Before throwing some newspapers into the audience, which would be taken apart, passed around and ripped until only one word was present per piece of paper, Karges told the audience that the word present on the piece of paper randomly selected from an audience member would be one among those listed on the whiteboard.

The student chosen read aloud his piece of paper, which said “makeover” —  a word not present among the 26 listed words. Karges feigned embarrassment for a few tense seconds before flipping over the whiteboard to display the word “makeover,” provoking screams of amazement from the audience. 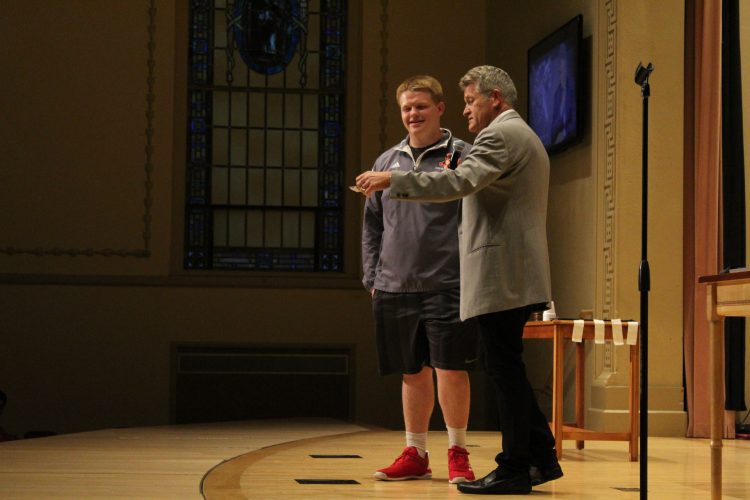 Karges (right) pretends to be flustered after first-year Hunter O’Connor read aloud the word “makeover” which did not align with the list of common words Karges’ wrote on a whiteboard behind him.

The rest of Karges’ illusory repertoire followed along the same vein and received similar reactions. He appeared to be able to read the minds of any student in the audience, from knowing the names of the parents of one student to guessing the phone number of another. His final illusion involved the seemingly telekinetic movement of a table across the stage of Gano Assembly.

Though some audience members assumed Karges had affiliates in the audience surreptitiously picking up information for the act, Karges was adamant that his illusions were a one-man job.

“I will give $100,000 to anyone who can find evidence that I have associates in the audience,” Karges said.

Karges insisted that his work could be replicated by anyone and revealed to the audience that a small shift in the way they think could boost their brain power dramatically. He ended his performance by promoting his book, titled “Ignite Your Intuition,” which was available for sale after the show. Copies of Karges’ book, “Ignite Your Intuition,” sat on the edge of the Gano Assembly stage during the show.

PreviousPrevious post: Students introduced to clubs at Jewell during the 2018 Activities Fair
NextNext post:Christian Student Ministries kicks off the year with annual Thrill on the Hill event