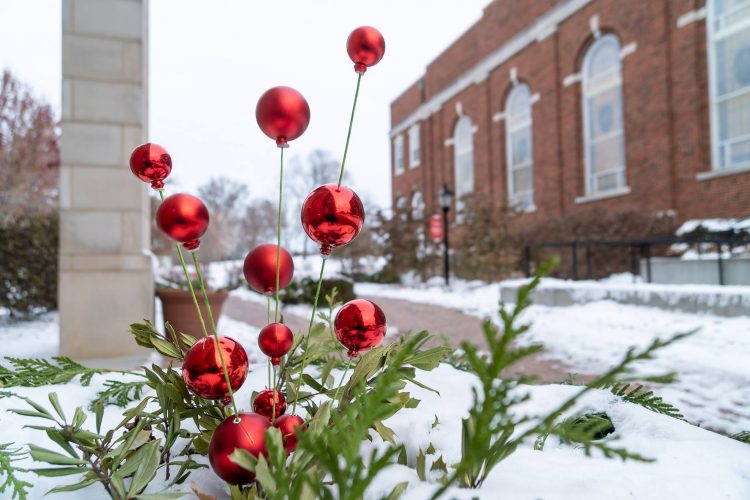 With the semester winding down and the start of Christmas break in sight, students across campus joined in on spectacular holiday traditions to usher in the holiday season.

The week of Nov. 25 began with the first significant snowfall of the year. Teachers cancelled classes and students were forced to extend their Thanksgiving breaks. Students could be seen taking advantage of the weather and sledding down the infamous Browning Bowl on lunch trays or making the risky trek the commuter lot. Frozen toes and cold faces were ignored as the race to see who sled the furthest or the fastest ensued.

The snowfall also led to several snowball fights and the occasional snowman on campus. The wintery weather was a sure sign the holidays were on the horizon.

Students and faculty spread some holiday cheer Wednesday, Nov. 28 at the annual Hanging of the Green in Gano Chapel. The long-standing tradition included performances by the jazz band, the handbell choir and the choral scholars, who sang carols along with the students. Santa also stopped by the event and passed around candy as the chapel was decorated with greens for the holidays. 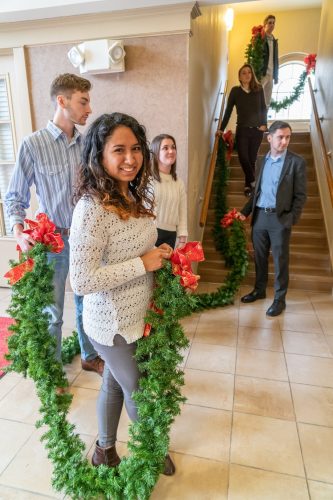 Student leaders prepare to “hang the green” in Gano Chapel.

“Hanging of the Green is my favorite because it features a bunch of really cool talents from a lot of people and it gives you that Christmas Spirit. I also love seeing Dr. Coleman as Santa,” said junior vocal performance major Blair Walker.

The night of Nov. 29, students gathered at the house of President MacLeod-Walls for the first “Lighting of the Cardinal Tree.” The large tree between the White River Chapel and the President’s house was lit up in festive red lights. After some caroling, students and faculty packed into President MacLeod-Walls’ house to enjoy hot chocolate and a commemorative ornament. A chance to pet the president’s dog was a big highlight of the evening. 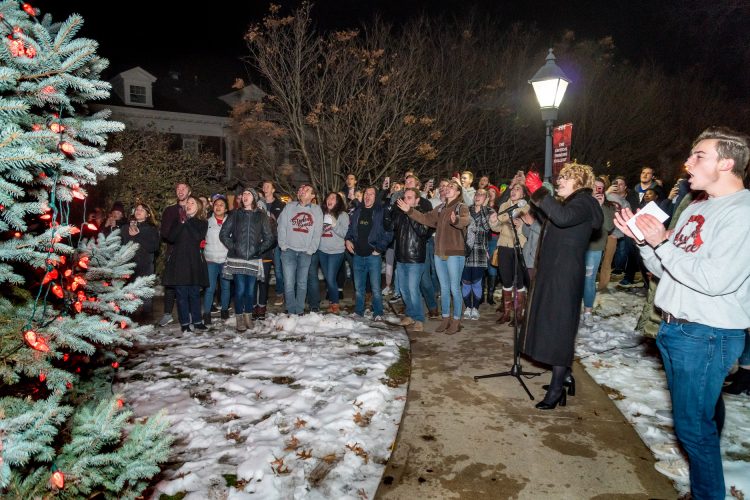 Nov. 30 marked the most anticipated event of campus–the Lighting of the Quad. The Jewell favorite brought faculty, staff, students and members of the community to Gano Chapel for a chance to hear the Jewell Symphonic Band perform. In addition to several classical pieces, the band and audience took part in a sing-a-long of holiday favorites. The spirit of Christmas was truly felt as snow fell from the ceiling and the voices of friends and families echoed through the chapel.

After everyone was in the Christmas mood, candles were passed around and the celebration moved outside as the holiday lights were turned on at Gano Chapel, Curry Hall and Jewell Hall. The event continued inside Yates-Gill College Union with free hot chocolate, apple cider, cookies and a meet and greet with Santa for children. 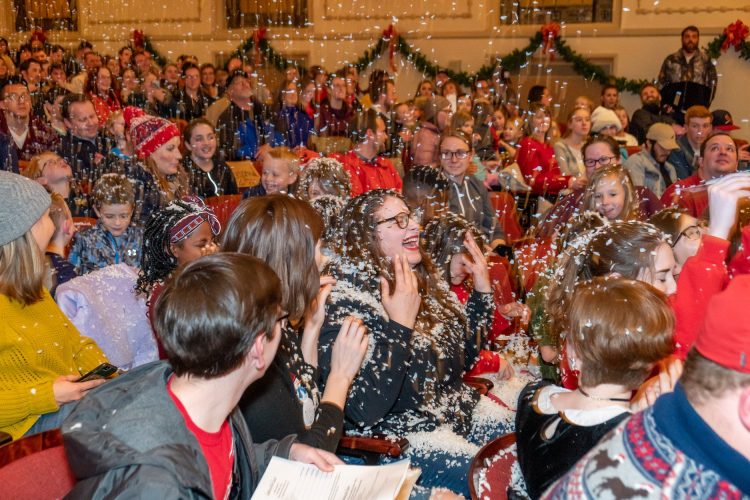 Snow thrown in Gano Chapel during Lighting of the Quad.

At 8:30 p.m. that evening, the Jewell Theatre Company and jazz band performed “A Charlie Brown Christmas.” The performance left members of the audience reminiscent of the true meaning of Christmas and the weary of a materialistic view of the greatest time of year. It also featured a strong cast and powerful music performances. 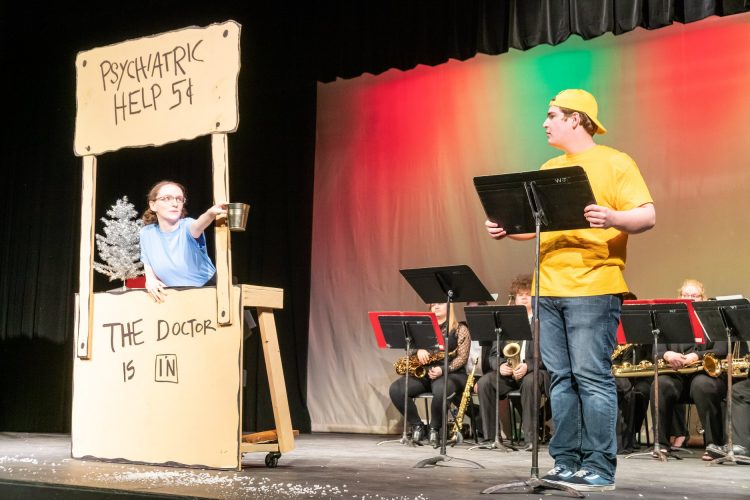 In addition to scheduled traditions, many residence halls initiated their own festive events to help students get in the holiday spirit.

“As a first-year, I’ve enjoyed all the traditions. I really liked participating in the hall events to decorate the hall for Christmas,” said Larry Dahlsten, first-year vocal performance major.

Whether you prefer singing Christmas carols, baking holiday treats with loved ones or shopping for a new Christmas sweater, the spirit of the holidays is alive and well here at Jewell. As the semester comes to a close, take a little break from your essays and exams and take some time to participate in holiday-themed events before all your friends leave for the winter break.