This January, protesters returned to many cities for the 2018 Women’s March, a continuation of the Women’s March in 2017 in the wake of Trump’s inauguration. This year’s protests focused on political action, especially with regard to the upcoming 2018 midterm elections. Additionally, the marches and speakers attempted to incorporate the backdrop of the #MeToo, anti-sexual assault and harassment, movement.

Internationally, most marches took place Jan. 20, 2018, on the anniversary of the original march. The largest crowds in the United States were in New York City, Chicago and Los Angeles with 200 thousand, 300 thousand and 600 thousand attendees, respectively. Thousands of protesters also showed up in hundreds of other cities.

The major theme of the march was “Power to the Polls” in an attempt to have more women in office and to support more women in exercising their right to vote. In addition to the primary gender equality message, the Women’s March also protested racial inequality, lack of LGBTQIA rights, Trump’s immigration reform, the tax policy, limited reproductive rights and a variety of other hot-button issues. President Trump himself tweeted his support of the march despite organizers’ statements about the march’s main goal being protesting him. 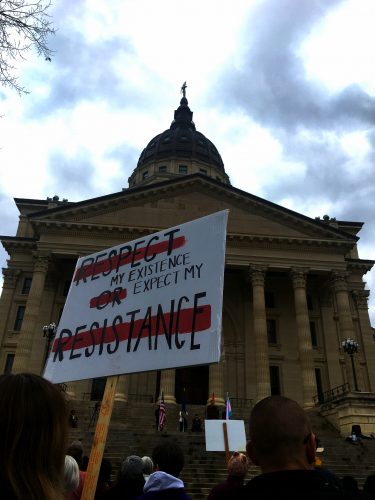 “I was particularly pleased that this year’s theme—Power to the Polls—seemed to be aiming to fix the non-inclusiveness of the original march movement. The speakers were almost exclusively women of color, and they were all either running for or holding office,” Melton said.

She was generally pleased with this year’s march but commented that the organization was lacking. There was no unified, major march in Kansas City itself this year, so the closest one was in Topeka. However, a small march was organized in Kansas City the night before it was held with little advertisement. Similar organizational issues seemed prevalent around the country.

Students who attended marches last year included Karen Tolbert, sophomore economics major, Elliott Yoakum, sophomore Oxbridge Literature and Theory major, and Seki Anderson senior biochemistry and Applied Critical Thought and Inquiry major. All three discussed the successes of the 2017 march as a reactionary response to the inauguration and an immediate option for involvement. The initial march received criticism but is largely regarded as a success because of the massive participation with over five million in attendance across the United States. Anderson said that the general feel of last year’s march was more relaxed than a typical protest because it was largely a display of solidarity against the misogyny at the 2016 campaign.

“The march’s reminder that you have a voice is important,” said Anderson. “Last year was more of a reaction to [the] November [presidential election]. At the time, there wasn’t more action that could have been taken, and attending the march was a concrete way to take action.”

They criticized the 2018 march for its few nearby locations, poor planning, lack of intersectionality, transphobia and march co-opting by the political system.

Tolbert focused on problems regarding the march appealing only to middle-class white women, with lack of substantial LGBTQIA, racially diverse and politically diverse voices. Specifically, the “pussy hats” popularized at the first march are criticized as transphobic and their traditionally pink color as racist. Regardless, the hats were again a staple for marchers, leaving many feeling the march missed a chance to restructure for more inclusivity in its second year.

Anderson and Yoakum further discussed the problematic “white feminist” vibe of the march, identifying the inability of many to attend the march for financial, safety and geographical reasons. Yoakum specifically discussed the unlikelihood that a march aiming to redirect the political establishment would make significant change in societal structures the march initially protested.

“[It] would have been nice to see more mechanisms for accountability, making sure people have scripts to call representatives and a way to look up districts and more info about other gatherings about lobbying or other things like that. A lot of people went to the Women’s March and that counted for civic liberal duty, but it wasn’t actually an action,” Yoakum said. 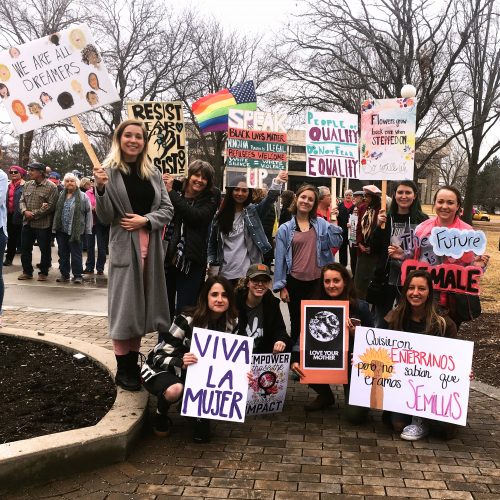 Another criticism voiced by Tolbert, Anderson and Yoakum was the march’s failure to incorporate the #MeToo movement fully into their message. The political theme of the march was encouraged insofar as it encouraged women to have a sustained voice in politics, but it also appeared to be the Democratic Party co-opting the message of the march, which could have emphasized #MeToo more otherwise.

Tolbert specifically criticized the movement’s general inability to adapt to such movements or positions after the march’s initial reactionary nature. She described the march as “dead in the water.”

“The march started as potentially leftist reactionary movement, but [the movement is] unable to move message or positions, unable to adapt abortion stance, unable to adapt #MeToo medicare for all, DACA, tax cuts or [other relevant movements],” Tolbert said.

Generally, the 2018 march was less successful and received less press than the 2017 march, but proponents of the cause emphasize the need for any action to keep the movement alive, despite its shortcomings.

A previous version of this article was published with a mistake.