“Maniac” is a wildly entertaining, complex and bizarre miniseries that gives us a showy peek at what a Netflix Original can do at its very best: bring a group of incredibly talented creators together to make a show that is concise, never gratuitous and will quickly gather a cult following from fans of “Black Mirror”, futuristic 80s films, “Twin Peaks” or any show that’s a little weird and exciting.

“Maniac” follows Annie Landsberg (Emma Stone) and Owen Milgram (Jonah Hill) as they go through three stages of an experimental drug trial whose pills aim to cure all mental illness and human suffering–a lofty goal that quickly descends into absurdity. The strong lead performances are further bolstered by performances by Justin Theroux, Sally Field and others. 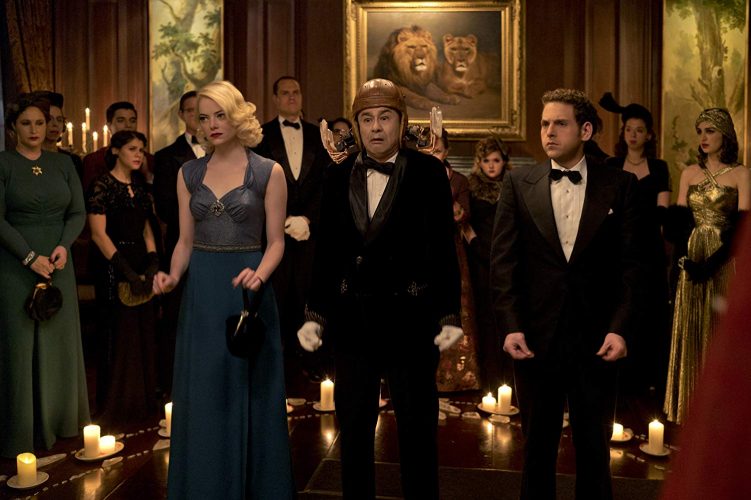 The setting is a world very similar to our own, although this world has computers that feel human emotions and purple animatronic koalas who can swindle you out of 100 bucks in a game of chess.

Lead character Annie is a chain-smoking, pill-addicted type-A who aggressively commands every scene. She goes through great lengths and her family’s savings to enter the trial and get one more pill–although the effect of the pill is not what one would think.

She heavily contrasts with the quiet and paranoid Owen, who has experienced hallucinations since a young age and is constantly uncertain of what is real and what is not. The audience starts to feel similarly as the series wears on and we see the world more frequently through Owen’s eyes.

The pills drag the characters through fantasy simulations that allow the show to show-offishly leap from genre to genre–the lead actors show off their expertise as they slip from married Long Islanders in the 80’s to Middle Earth elves to spies in an alien invasion. Annie’s troubles and demons are obviously reflected in all of her dreams, while Owen is often swallowed whole by his heroic roles and has a difficult time finding his way back to his true self.

The show is colorful, well-shot and a delight for the senses. It seems to purposefully mimic low-production 80s films in its constant attempts to be self-conscious of its own absurdity. Like the fast-paced fantasy sequences, the mood of the show jumps quickly from comedic to darkly somber.

However, the themes of the show are hardly fantastical: Annie cannot move on from her estrangement from her sister. Owen is simultaneously trying to distance himself from his manipulative, powerful family and to desperately find his place in it. Both characters are overwhelmed with the desire for human connection, which they eventually find in each other in a refreshingly non-romantic fashion.

Some may find this show a little too odd. It is certainly not for someone looking for something traditional or expected. However, I still recommend trying it out for size. As with all Netflix creations, I recommend not watching the trailer. If you are like me, the first episode will suck you right in.