On Sept. 9, Serena Williams, professional American tennis player, yelled at chair umpire Carlos Ramos during the U.S. Open final against Naomi Osaka. The outburst occurred after Williams received multiple code violations and was accused of being coached from the sidelines – implying that she was cheating.

Williams opposed the charges filed against her and accused Ramos of upholding sexist double standards with his judgments.

“Do you know how many other men do things that are much worse?” Williams said. “This is not fair. There’s a lot of men right here who have done a lot of things, but because they are men this doesn’t happen to them.”

While the crowd validated her claims with raucous cheers and applause, Ramos did not alter his judgment and penalized Williams further for her accusations against him.

After the fact, Williams’ performance was harshly criticized on social media. Her behavior was called “misguided.” Williams was accused of “throwing a tantrum” and was blamed for spoiling Osaka’s first Grand Slam win.

An ESPN video of match highlights with nearly 10 million views shows the incident in full and has allowed viewers from around the world to comment on the situation.

“I went from having no opinion of her to hating her real quick,” said YouTube user Kareem Majeens.

The insults were not limited to her abilities as an athlete. Some users were unafraid to comment on Williams character and family life.

“It’s probably her hormones after having the baby,” said user ilovemytribe.

Other users questioned her motives.

Ultimately, Williams was publicly humiliated, penalized to an extent that resulted in her losing the U.S. Open and fined $17,000 for her outburst.

None of her claims have been proven untrue.

Merely weeks later, Sept. 27, Brett Kavanaugh faced senators in a hearing to address accusations that he had sexually assaulted at least three different women while intoxicated.

During the hearing Kavanaugh emotionally refuted the allegations, alternating between displays of fury and tears as he sought to discredit the testimony of accuser, Christine Blasey Ford.

While the display drew mixed reactions online it is indisputable that Kavanaugh delivered an atypical testimony to the Senate and that his behavior was uncharacteristic of a Supreme Court justice.

During the hearing, Ford delivered a calm and detailed testimony, yet there was no shortage of questionable moments in Kavanaugh’s address.

For starters, he attacked Sen. Amy Klobuchar (D-Minn.) when she asked if he had ever drunk so much that he “couldn’t remember what happened or part of what happened the night before.”

“I think you’ve probably had beers, senator,” said Kavanaugh. “You’re talking about blackout. I don’t know. Have you?”

Kavanaugh also lied about the meaning of the terms “boofing,” “devil’s triangle” and “renate alumnius” which were all found in his high school yearbook entry. 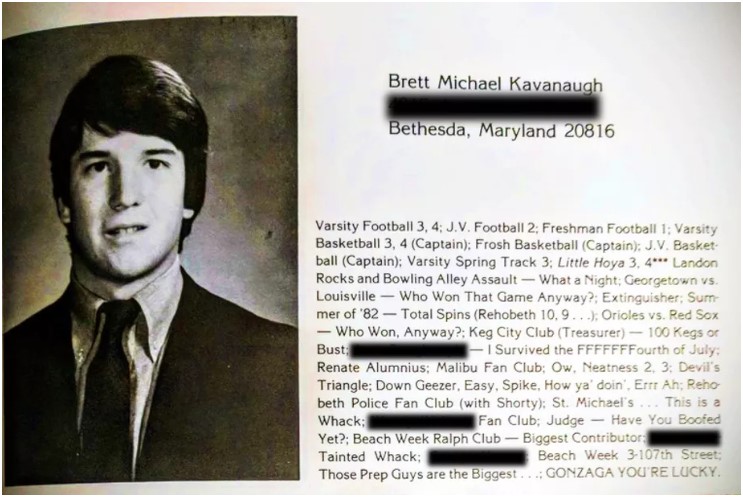 A copy of Brett Kavanaugh’s yearbook entry, courtesy of Vox.com

Following the hearing, the Wikipedia entry for “devil’s triangle” was altered to match Kavanaugh’s testimony by an anonymous source from the U.S. House of Representatives.

Despite Kavanaugh’s erratic behavior and blatant lies, only a limited investigation was conducted over the allegations against him.

In the days following his outburst, Kavanaugh was given a platform to explain his behavior, writing in the Wall Street Journal that he “might have been too emotional” and the situation was “unfair” and caused him “great distress.”

Kavanaugh was also praised by the nation’s President.

Judge Kavanaugh showed America exactly why I nominated him. His testimony was powerful, honest, and riveting. Democrats’ search and destroy strategy is disgraceful and this process has been a total sham and effort to delay, obstruct, and resist. The Senate must vote!

Ultimately, Kavanaugh was confirmed as a Supreme Court justice Oct. 6.

The irony of these contrasting outcomes was not lost on many.

In a tweet which has since been deleted, Deborah Barros, a candidate for the Alabama State Senate, said, “Funny how a black female tennis player is held to a higher standard to keep her emotions in check than a Supreme Court nominee.”

A statement to which Alexis Ohanian, Reddit founder and Serena Williams’ husband, was quick to respond.

It's not funny, it's bullshit. https://t.co/pYkmx4ufvI

Unfortunately, the Kavanaugh confirmation sends a negative message to women everywhere, as CNN analyst Kristen Powers asserted, the confirmation indicates that women “won’t be taken seriously” when they do speak out against assaults against them.

Comparing responses to Williams’ and Kavanaugh’s outbursts is disheartening and according to Brittany Packnett, political activist and vice president of national community alliances for Teach for America, a clear example of white supremacist patriarchy in America.

The clearest example of how white supremacist patriarchy works this year thus far:

Society holding Serena Williams to a higher emotional standard in a tennis game than they do accused abuser Brett #Kavanaugh in a lifetime job interview to determine the fate of the country. pic.twitter.com/yeNZwTCBBg