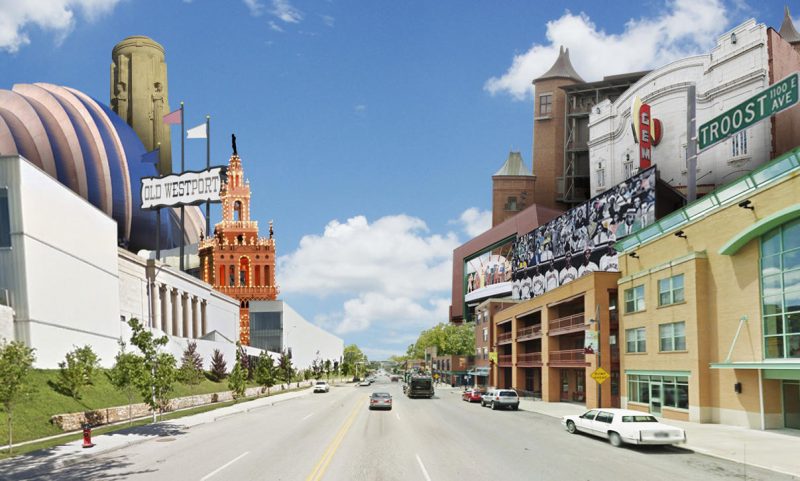 Depiction of wealthy parts of Kansas City next to traditionally poorer parts.

There isn’t much deliberation needed over the question of whether or not the United States is a colonial project. The U.S. embodies the word colonialism and magnifies all of the worst qualities of it.

The American origin story begins with settlement on Native American lands. This was Columbus’ supposed discovery of North America and the pilgrims subsequent relocation into American colonies. Following this, the subjugation of native peoples began and the parasitic relationship between white Europeans and Native American peoples also developed.

After mastering the strategies of living on the new land, native presence would become less and less vital and therefore less and less prevalent. Over coming decades, Native American populations would essentially be exterminated for the sake of the continuing American colonial project. Today, the U.S. tauts a motto of freedom while largely neglecting to consider the implications of past institutions that displayed values oppositional to freedom. If we hold the U.S. to the principle of judgment according to what is done and not what is said then we only see an undying emphasis on dominance and whiteness.

The factors that motivated colonialism in the first place still rear their ugly heads in today’s society and locally in Kansas City, only in a different fashion.

Gentrification has been gaining a strong hold on the markets of Kansas City. While it seems gentrification is simply a necessary by-product of developing an urban area, the underlying assumptions of gentrification are riddled with antagonisms that shouldn’t exist in the American psyche.

Gentrification is itself a concept predicated on masking the failures created by capitalism rather than attempting to fix them. There is an intentional complacency towards issues of income inequality that comes with active gentrification.

The idea of pushing a culture out in favor of a new or better culture justified colonialism in the same way it is currently justifying gentrification. Gentrification is “the process of repairing and rebuilding homes and businesses in a deteriorating area (such as an urban neighborhood) accompanied by an influx of middle-class or affluent people and that often results in the displacement of earlier, usually poorer residents.” These trends have been more and more evident in Kansas City.

According to a study by Governing, the rates of gentrification in Kansas City have been rising since 2000 in areas such as Troost, Westside, Union Hill and 39th street. Kansas City’s rates of growth positively correlate with the modernization and gentrification taking place. Words like growth and modernization sound well and good but aren’t necessarily all that they seem.

Colonialism and gentrification have eerily similar definitions. Colonialism is defined as “the practice by which a powerful country directly controls less powerful countries and uses their resources to increase its own power and wealth.”

Both gentrification and colonialism have themes ascribed to them that necessitate and promote control while also being sufficiently operable under the guise of saviorism.

When it comes to Kansas City, it is becoming more and more evident that the saviorism of gentrification is an undeniable fact. In 2017, The Pitch published an article documenting Matt Abbott’s contributions to gentrification in the Kansas City area, particularly the Crossroads. Abbott is a wealthy developer whose goals are to “create an entrepreneurial and creative heartbeat for the city.” What this means is that Abbott is interested in making Kansas City generally more palatable for the tastes of larger society.

This would entail Abbott identifying specific areas of Kansas City that are not palatable for some reason – including high rates of crime, noticeable poverty and places with little commercial value – and developing the area to the point where those bad things simply disappear. This is the extent to which Abbott can say he completed his job as a developer.

Unfortunately, it is unrealistic to think that Abbott has truly done anything about the problems evident in the specific neighborhood. The solution to the problems, by means of gentrification, is to just make it so people who cause these problems to exist can’t afford to live there anymore.

When gentrification happens and property is made more valuable so that it meets the needs of the more affluent, presumably white, American that moves in, those who were poor in that area are forced out.

Thus arises a functional problem with gentrification. How do you modernize urban areas where poverty, crime and homelessness have been pushed and isolated without just telling those who aren’t portrayed as productive citizens to “shove it”?

According to a comprehensive look at Kansas City gentrification by Dart News Online, “As more market stuff comes in around us, taxes are going to increase, and Mrs. Garcia down the street, who used to pay 10,000 for her taxes, may have to pay 11, 12 or 13, and that might not be affordable.”

Gentrification is directly aimed at identifying people settled in one place and uprooting them because there is a more profitable use for their land. This is the colonialist mindset that Americans especially should be conscious of.

At the root of colonialist mentality are antagonisms such as racism, classism and dominance. The belief that wealthy upper-middle class white folks can force people out of their homes because it is good for the economy or creative atmosphere is an excuse to justify displacement of minority folks that mostly populate urban areas and a demonstration of blatant disregard of the true condition of the American economy.

Capitalism itself thrives off of the subjugation and determination of certain classes of society being capitalistically less than in some way, shape or form. This is the dominance aspect of what gentrification does. It asserts the authority that white civil society has over other races and just like they did with the colonial project – the gentrification project has been initiated under the guise of white saviorism. Areas with high rates of crime and poverty are essentially saved by white people’s presence and activity in the region. Why does making a part of town more palatable entail making that part of town whiter? The vast majority of wealthier American citizens are white and the image of gentrification being a white institution is not misplaced.

According to an article by Blavity, Stuart Bullington, deputy director of the Kansas City Department of Neighborhoods and Housing Services believes gentrification is completely viable.

“I can see the whole thing. I can see it all coming together. Gone are the drug dealing, prostitution, burned-out houses, there is no one who can be negative at this point, in my opinion,” Bullington said.

Bullington has explicitly described white saviorism without recognizing the negativity inherent to his statement.

In places where gentrification is happening, what was there once was undesirable or bad so money was introduced into the economy and all of the problems have been resolved.

Unfortunately that is not how reality works. The crime, the poverty and the indications of income inequality did not go anywhere, it all still exists. Gentrification works by masking these problems and not actually doing anything about it. There are no considerations of why the areas that are gentrified are in need of a makeover in the first place; instead rich people move in and everything is supposedly made all better. Just like when Native Americans were confronted by the white Europeans and forced out because they could not be reconciled with the image that the white man had of America, the poor and marginalized folks of urban areas are being faced with the same oppressor, the white man with more money and resources.

A common argument against this perspective of gentrification is that gentrification increases diversity and decreases segregation. An article by University News at UMKC considers this argument:

“Many gentrifiers argue they want to advocate a diverse community and the original residents should not try to segregate themselves, arguing gentrification is good because it spruces the place up, decreases crime, and increases overall income of the neighborhood. Many express a desire to move into these up-and-coming neighborhoods, of low rent cost and ‘the culture,’ However, the neighborhoods the genteel swarm into don’t remain culturally, ethnically, or economically diverse. Time and time again we have seen this. The most recent victims of gentrification have been historically black communities like Harlem, Brooklyn and Detroit. These bastions of culturally rich neighborhoods have been targeted by up-scale project developers, forcing original residents out.”

Gentrification does not have its intended effect. While it may be easy to motivate people to participate in the institution of gentrification, it is hard to produce the results gentrifiers claim happen when you do gentrify.

In addition to this, gentrification is a large reason black histories are being erased. George Allen is a black homeowner whose experiences with gentrification were documented by Blavity. Allen lives in the house that has been passed down through is family for over 100 years and does not like what gentrification has done to his community and could do to him.

“I come outside and look at what’s going on around me every day and I shake my head, I wish all of this would have never come here. It isn’t just the white ladies walking their dogs, it’s the rising property values. It’s scary because I’m an existing resident that I think, one day, will be pushed out. I really do,” Allen said.

Just as the colonial project did not care about the culture that preceded it, gentrification does not care about preserving existing culture as much as it cares about creating a new culture in the image that is more accommodating to capital.

The similarities between colonialism and gentrification number too many to disregard them as a coincidence. The concepts of white saviorism should be abandoned because they justify the oppression of groups deemed to be less than. White saviorism also masks the true problems of income inequality that sparked the gentrification movement, meaning structural issues such as poverty will continue to grow and fester just outside of the public eye. Focus on solving problems that make gentrification necessary should precede solving the visible aspects of those problems.