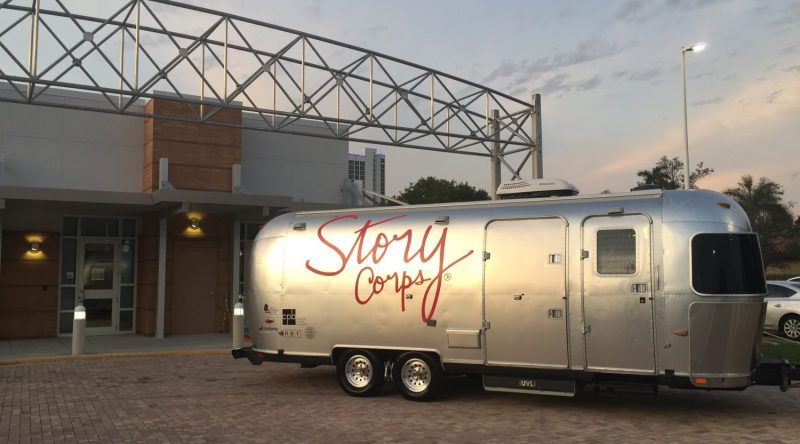 The StoryCorps mobile tour booth was parked outside of the Nelson Atkins Museum of Art recording stories from people in Kansas City from Aug. 2 to Sep. 2.

StoryCorps is an independently funded, non-profit organization that started as a booth in Grand Central Station in New York City. The goal of the project is to invite the public to have intentional conversations in interview format.

During a recording session, two people enter the booth and one interviews the other. The concept is simple, yet the organization claims the environment fosters in-depth, meaningful conversations. A StoryCorps employee facilitates the conversation, but the individuals coming into the booth direct the conversation.

Part of StoryCorps mission is to archive conversations they record in the Library of Congress. StoryCorps is affiliated with NPR, so shortened and edited versions of the conversations have been broadcast on NPR’s “Morning Edition” and on the NPR website. Additionally, the StoryCorps Mobile Tour partners with local NPR affiliate station in the locations at which they record.

“[We consider] where haven’t we been in a long time? Where is our archive kind of lacking in terms of representation across the United States? Where might be a particularly interesting place to go this year or at this particular time in history?” Andersen said. “With KC, we hadn’t been there in a while and it’s just kind of a vibrant, continually growing city.”

While in KC, StoryCorps partnered with KCUR 89.3. The two organizations produced a listening event Aug. 21 at 7:30 pm. The event featured event facilitators discussing the process of producing the stories, sharing animated stories and sharing edited stories recorded in KC.

The StoryCorps Mobile Tour specifically reached out to different organizations in KC, including the Hispanic Chamber of Commerce of Greater Kansas City, in order to record stories from populations representative of the city itself. Organizations contacted were generally non-profits which benefit minority populations in KC that may not have heard of or been able to participate in StoryCorps otherwise.

Andersen discussed the mission of StoryCorps while explaining how they choose community partners.

“Our goal, our internal, Mobile Tour, StoryCorps goal, [contains] a really strong commitment to diversity. …  For [the mobile tour], what that means is that for every stop we go to, we want our recordings to reflect the diversity of that area,” said Andersen.

In describing this commitment to diversity, Andersen emphasized the importance of having community partners to engage different communities within the city.

“We need to work with organizations and community leaders that are invested in those communities and that are doing work there already that can help kind of create a bridge between the services that we’re hoping to provide and the community that they serve. [We] do a lot of research into organizations in different neighborhoods and different communities that are doing interesting things or that have strong connections or that are doing work that somehow aligns with what we’re doing,” Andersen said. “That way it can kind of a give-and-take where we can support the work they’re doing as well through these recordings.

The organization reaches out to community partners in order to engage diverse parts of the community to more fully represent the cities. In KC specifically, community organizations helped bring people from both sides of the state line, both sides of Troost Ave. and from the significant number of diverse backgrounds our city fosters – as described by the facilitators of the listening event.

“We explain what it is we’re doing and what we want to do there and how we might partner together. Then we kind of give them free reign, like ‘communicate this to your community, see who’s interested, sign people up for recording and things of that nature,’ ” Andersen said in describing how the organizations foster this diversity.

Speaking to the benefit of having community partners, Andersen touched on the difficulty of expressing the nature of StoryCorps.

“It’s not an easy thing to explain what StoryCorps is. It makes sense once you do it, but it’s kind of hard to explain to somebody ‘you’re going to go into a recording studio, bring a family member or a friend, you’re going to have 40 minutes to talk about whatever you want,’ ” said Andersen.

People often deflect when offered this experience because they don’t think they have stories to offer or they try to recommend people who they think to be better for it.

“Sometimes it takes that person being like ‘no, no, no, trust me. Not only does everybody have a story, but what you have to tell is important and we want you to come in with whomever you choose to tell that story,’ ” said Andersen.

A more extensive archive of StoryCorps interviews can be accessed here. The organization is also working on adding all of the archived interviews from the Library of Congress to their website.