Four trade and finance experts from the Kansas City area came to William Jewell College to present on the relevance of international trade at a breakfast event in Yates-Gill College Union Sept. 19.

Opening speaker, Brian Gordon, SVP and Manager of the International Banking Group at Commerce Bank, advocated for the U.S. to adopt a more trade-centric economic mentality.

“Trade, not aid!” said Gordon. “When you export products, you’re importing money […] and that floats all boats higher.”

In a discussion about emerging economies, Gordon iterated that trade agreements are negotiations and not win-lose situations and told audiences that agriculture will be one of the most interesting and rapidly developing trade sectors throughout the next few years.

Gordon concluded by discussing China’s Belt and Road Initiative, warning audiences to keep a close eye on the global economic landscape and alluding to the reality of economic gaps facilitating an opportunity for the U.S. to implement a new Marshall Plan.

Melissa Miller, senior manager at the World Trade Center KC, spoke next. Outlining the trade and export scene in Kansas City, Miller reported that Kansas City outperformed the U.S. throughout the recession and, in 2016, was the 44th largest exporter in the nation generating about 6.7 billion dollars in value from exports.

“It must have been our midwestern risk-adverseness,” said Miller.

Continuing with a list of benefits to global trade, Miller stated that companies which trade globally pay workers an average of 20 percent more than those which don’t and that one-in-five jobs in the U.S. are trade dependent, implying that increasing trade will boost national the job market. These claims are echoed by the U.S. Chamber of Commerce.

Regional manager of the U.S. Small Business Administration Office of International Trade Larry Cresswell was next to speak.

Cresswell, an employee of the federal government, presented the official definition of a small business – fewer than 500 employees for manufacturing businesses and less than 7.5 million dollars in annual receipts for most non-manufacturing businesses – and discussed loan options the government offers small business owners who trade internationally. 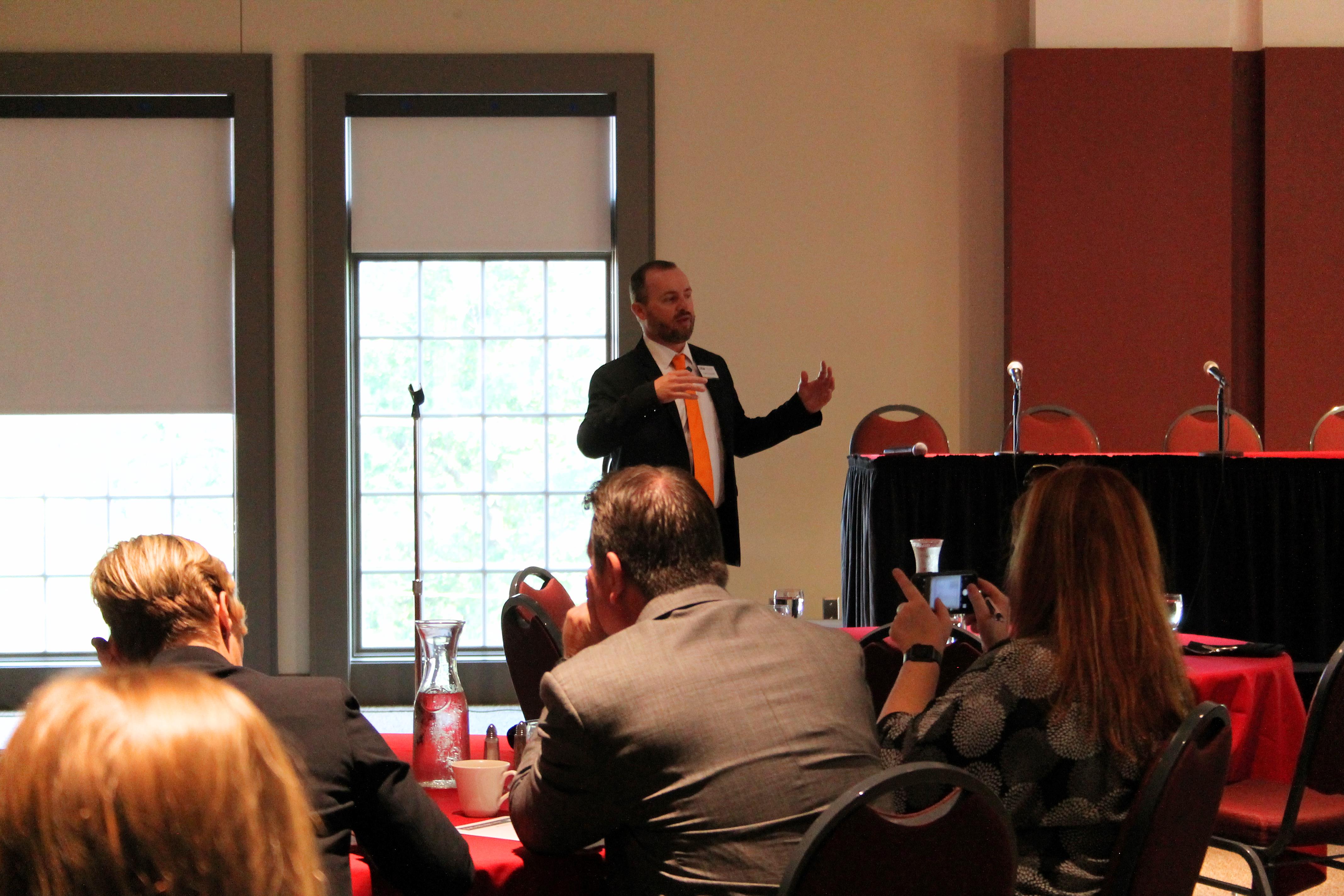 The final speaker, Mark Klein, regional director of the Export-Import Bank of the U.S. (EXIM), presented statistics about the U.S. as an international economy in comparison to the economies of other nations.

While the U.S. is one of the world’s largest exporters of goods, second only to China, Klein believes that more funds ought to be directed towards developing this segment of national business. With only 14 percent of the U.S. GDP coming from exports, Klein does not believe that this accurately reflects the amount of resources the country has.

“Hanging out with Rwanda and Haiti is probably not the cocktail party we want to be at,” Klein said when discussing nations that devote a similar percentage of their GDP to exports.

Yet, Klein warned U.S. business owners to exercise caution when exporting products and to seek the assistance of the Federal Government.

Elaborating, Klein outlined three restrictions to protections the government offers businesses – the U.S. Content Policy, Military Policy and Country Limitation Schedule. So long as companies within the U.S. do not violate the clauses of any of these policies the government will assist the owners in ensuring that they are compensated for exported products.

But, as Klein explained, the policies should not be considered restrictive.

“I don’t care if the little rubber buttons come from Vietnam or if the wiring inside comes from China. I just want to know that it was designed in the U.S. and assembled in the U.S.,” said Klein using a remote control as an example of an export good. “So long as at least 50 percent of the product, on a cost basis, can be traced back to the U.S. it fulfills our content policy.”

The event concluded with a panel session during which time the four speakers answered questions from the audience.

The summit was sponsored by the World Trade Center of Kansas City and Commerce Bank. Entities including the Liberty Economic Development Corporation, the Liberty Area Chamber of Commerce and Jewell supported the event.