Our red-feathered mascot, rather than William Jewell College’s namesake, has become the popular image of William Jewell. When thinking about the man who founded the campus in 1849, most students draw a blank. Who is he? For some, he is another vague portrait of an unmemorable face; for most, he is faceless. The man, despite his obvious influence, is a mystery. Although Dr. William Jewell’s legacy is sealed between the bricks of Jewell Hall, he is otherwise as forgotten as his obscure grave in Columbia, Mo. The epitaph on his headstone, “His work is over, he did it well and faithfully,” is barely a hint of his contributions to higher education and the civic and religious communities in Missouri.

Jewell came to Boone County, Mo. in 1821 after studying medicine at Transylvania University in Lexington, Ky. Being one of only two doctors in Columbia at the time, he was one of the first physicians to succeed in making money from his practice. However, he also accepted farm produce, labor and livestock as payment. In some circumstances, he pursued legal action against those who did not pay him, but for the most part he enjoyed working pro-bono for clients who did not have anything to give in exchange for his services. 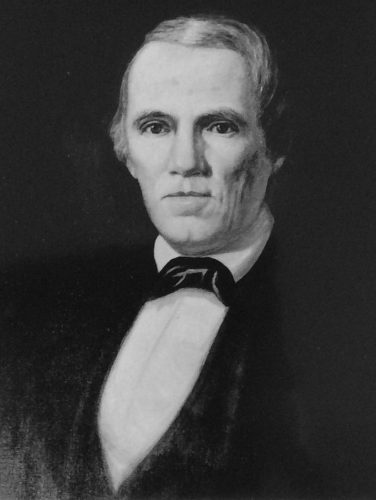 Jewell took his occupation so seriously that he was critical of others in the same field. During his membership at the Little Bonne Femme Church in 1823, he quarreled with two fellow members, slandering one of them as “a so-called physician, but in reality only a quack” throughout the congregation. Upon pressure from the church administration Jewell apologized, but immediately afterwards he circulated pamphlets that attacked one of the men. Jewell was given permission to form a new church, which would become the First Baptist Church of Columbia.“The night was never too dark nor the day too stormy for Dr. Jewell to travel miles from home to wait on patients who could not and did not pay him a penny: he seemed to enjoy charity practice, and he did so much of it that his friends realized and he realized that it was injuring his health and shortening his life,” said Dr. William Duncan, a colleague of Jewell’s, according to Judge North Todd Gentry’s 1932 address.

“This was the first church of any denomination in Columbia,” said Gentry.

It was this fiery dedication to furthering Missouri Baptists that would instigate the construction of the College in Liberty 26 years later.

Jewell’s experiences in the Kentucky and Missouri state legislatures during the 1820s, including his tenure as the mayor of Columbia, demonstrated his adequate leadership. All the while, he maintained his medical practice which influenced his positions on certain state laws. He helped repeal a Missouri statue condoning the whipping post as a criminal punishment and created one of the earliest regulations on doctor-patient confidentiality, a law that, though revised over the years, remains in practice today.

His previous government service contributed to the peak of his civil leadership during the 1840s. While serving as the president of the Columbia Temperance Society, Jewell was simultaneously appointed as the superintendent for the construction of Columbia’s new courthouse and was elected president of the African Colonization Society in 1845. The latter was an anti-slavery organization dedicated to resettling slaves in Africa. However, although Jewell was considered an abolitionist, he initially owned slaves. In 1846, he emancipated four slaves, and two more were granted freedom in his will. Sticking with minority advocacy, Jewell was also invested in the education of women. In fact, he was one of the first three trustees for the Columbia Female Academy, a school solely devoted to women’s education.

His varied interests and accomplishments led up to his final and most famous achievement. William Jewell College. In 1843, Jewell offered to donate $10,000 worth of land towards establishing the first all-men’s Baptist institution west of the Mississippi River if the Missouri Baptist Association would contribute an additional $16,000. The General Association was not able to meet his price until four years later. Competition for Jewell’s bid was fierce; Liberty, along with Booneville, Fulton, Palmyria and Columbia, were the top considerations. Jewell personally favored Columbia, wanting the school to be at the center of the state, but he was convinced by General Alexander Doniphan’s proposal for Liberty. The prestige of Doniphan’s reputation as a war hero, along with his promise of $7,000 ultimately persuaded the Baptists in their decision. In gratitude, Liberty named the College after its sponsor.

Jewell was meticulous and obsessive with each of his endeavors, and the College was no exception.

“When the foundation was dug, [he] looked into the hole and said, ‘Keep digging until you find bedrock, this building will stand on solid footing.’ As the brick walls were being erected one wall did not meet Jewell’s specifications. ‘Tear it down and build it right,’ came [his] order,” said Mark Buhlig, in Jewell’s pamphlet from the Missouri Baptist Heritage Series.

This constant drive for perfection, along with the summer heat, was a stressful combination for Jewell’s health. He suffered a heat stroke while overseeing Jewell Hall’s construction and died a couple of days later at a nearby hotel Aug. 7, 1852. His body was transported by steamboat back to Boone County for his funeral, and he was interred at the Jewell family’s cemetery in Columbia. Liberty and Columbia both hosted well-attended memorial services and closed all businesses and public offices during the time of his burial.

While the memory of Dr. William Jewell has waned with the passing years, his presence remains in the form buildings and legislation, proving his continued relevance. It is to this highly-driven man, the real Billy Jewell, that we credit our founding.

All of the information on Dr. William Jewell was found in the Charles F. Curry Library’s archives, particularly in the William E. Partee Center for Baptist Historical Studies. Additional resources pertaining to Dr. Jewell, besides those cited in this article, can also be found in this department. For inquiries or appointments on any history of William Jewell College, contact Rebecca Hamlett at hamlettr@william.jewell.edu.

PreviousPrevious post: From the Journey: Moriah Vanderburg
NextNext post:Student Handbook: A Review of the New Changes