William Jewell College (WJC) is the oldest college still in use west of the Mississippi River, and the oldest building at WJC is Jewell Hall. Jewell Hall has a rich history with many legends.

In 1849, the Board of Trustees, including Dr. William Jewell, Alexander W. Doniphan and Rev. Robert James, decided to commence work on a college in Missouri. Fulton and Boonville put in bids, but the winning bid came from Liberty, Mo.

According to an article entitled “Hall Housed Civil War Troops,” it is well-known that the father of Frank and Jesse James, Rev. Robert James, was a donor to the College. Lesser-known is that Robert James pledged $20, roughly $600 in today’s economy, for the construction of Jewell Hall. Unfortunately he died before his debt was paid, bestowing the responsibility of that debt on his next of kin. This means that it was technically Frank and Jesse James who donated the money that funded construction.

There are multiple reports confirming that Dr. Jewell donated the acres of land on which the College sits. However, one report states that it was James T.V. Thompson who donated the land for the campus. It is difficult to say whether or not the report that Thompson donated the land is reliable. Because there are many more reports attributing the donation of land to Jewell rather than Thompson, it is more reasonable to assume that the man for whom WJC was named was the true benefactor.

Dr. Jewell was a Missouri State Senator and Baptist layman. During his career as a state senator, he fought to abolish whipping posts and pillories. While in many aspects Dr. Jewell was a humanitarian and an advocate for freedom, he was a man of contradictions. According to a 1975 article designed to give information to individuals touring WJC, despite Dr. Jewell’s actions against slavery, he was still at one point a slave owner, and slaves made the the bricks used to build Jewell Hall. According to a document about the dedication of the plaque on Jewell Hall honoring former president John F. Herget, Dr. Jewell freed all of his slaves upon his death and ensured they were given the means to begin a new life. 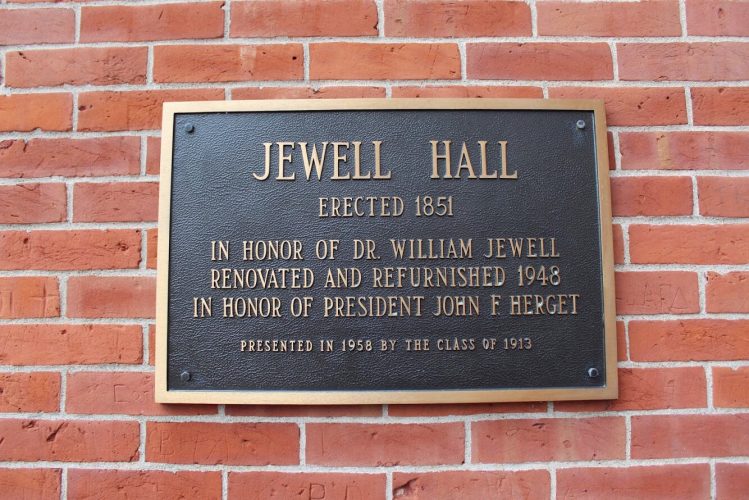 Construction of Jewell Hall officially began in 1850 and was completed in 1858. Dr. Jewell oversaw construction until his death by sun stroke in 1852. Although he was never professionally trained in architecture or construction, Dr. Jewell had a detailed plan for the College’s focal point. Jewell Hall features Greek-revival style architecture, modeled after a courthouse that Thomas Jefferson designed in Virginia.

Dr. Jewell was meticulous in managing the project. Legend has it that when he came back from a business trip and saw that the construction crew had already built a 160-foot-long and 3-foot-deep wall without a foundation, he made the crew dismantle the wall, dig until they hit bedrock in order to lay a strong foundation, then rebuild. His attention to detail paid off. The Hall stood for years before its remodeling in 1947.

It was discovered during the remodel that it was almost a miracle it stood so strong for so long. While replacing the flooring and taking down some of the ceiling, repairmen found that Jewell Hall was supported almost entirely by white oak trusses instead of brick. The original builders trusted the wood more than they did the bricks used to build the Hall. Despite this supposed flaw in construction, Jewell Hall stood for almost a century, even surviving the Civil War.

During the war, the Hall was commandeered twice for use by the federal government.

After the Battle of Blue Mills Landing Sept. 17, 1861, Jewell Hall was used as a hospital and barracks for Union soldiers for over five weeks. The Union used it again in the summer of 1862 as quarters and a fort in order to ensure that Confederate troops could not march north of the river. 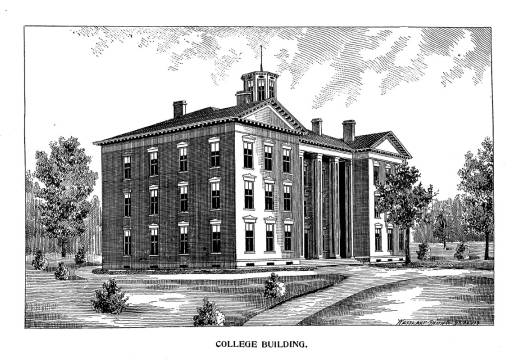 It is unknown whether Union soldiers were the only troops quartered in Jewell Hall. According to popular thought and most of the articles in the Jewell Archives, WJC was a Union stronghold. However, one article from the Liberty Tribune, dated April 2, 1975, states that both Confederate and Union troops utilized the school grounds. Whether or not Confederate troops used this ground as well is still unclear.

To commemorate Jewell Hall’s use during the Civil War, George Caleb Bingham painted two images of the hall in 1867. Unfortunately, these paintings were destroyed in a fire.

Jewell Hall’s history is punctuated by other significant moments. In 1891, the 1st session of the 51st Congress passed House act 1574. This act recompensed WJC for being used in the Civil War and paid the school $5,200.

In 1920, WJC officially allowed women to enroll as students, marking the first year women were able to achieve higher education at the College and in Jewell Hall.

In 1948, remodeling of the hall was completed and included bathrooms, a new roof, new woodwork, create lecterns and connecting hallways.

Three years after WJC’s 125th anniversary in 1978, Jewell Hall was added to the National Register of Historic Places to commemorate its use in the Civil War and the many years it has stood as a representation of higher education on the western frontier.

Sometime after 1978 a new cupola and shutters were added to Jewell Hall.

Certain materials used in the publication of this work were obtained from the Charles F. Curry Library, William Jewell College, Liberty, Mo.

2 thoughts on “An overview of Jewell Hall’s rich history”