The Hilltop Monitor sat down and spoke with Thomas Hollinberger, first-year data-science major, at his usual spot on the first floor of the Pryor Learning Commons. Hollinberger came to William Jewell College with more than a little life experience than usual first-years.

Hollinberger graduated high school in 1974, graduated from Kansas State with an architectural degree in 1979, was a naval officer for 27 years, a construction project manager for six years, taught project management and operations management at a business school and has now come to Jewell to learn data science. 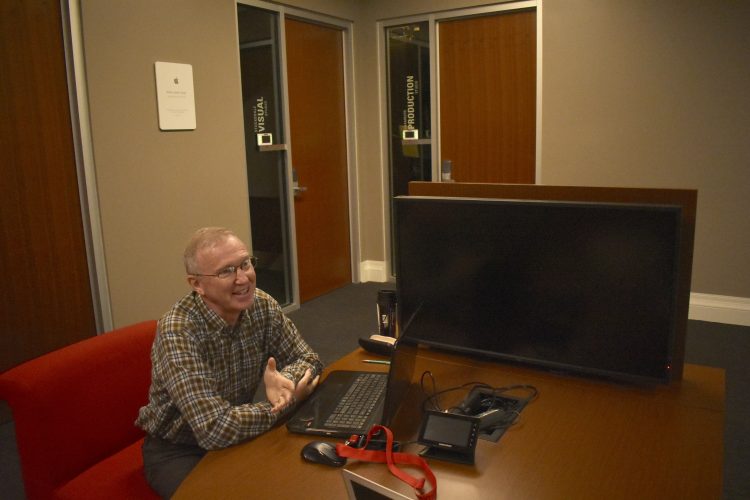 Hollinberger and his wife moved from Manhattan, Kansas, to a location near Liberty so that they could be closer to their two grandsons.

“We [Hollinberger and his wife] decided now was a good time to move back because we are in our early sixties, and the grandkids are four and eight. We are not getting any younger, and they are not getting any younger, and we are only going to be cool for another five years or so. So we figured now is a good time to move if we are going to move,” said Hollinberger.

Jewell’s location in Liberty was one among the combinative reasons that made Hollinberg’s decision to come to Jewell an easy one.

“Finances are such that I could probably retire, but I wanted to stay active, stay busy and keep my mind engaged. The great thing is that I have got a couple of years of eligibility left on my GI bill so I am thinking ‘Hey I can go back to school!’ I enjoyed it when I went to school, and so I started looking around, and I was geographically the luckiest guy in the world. Because William Jewell is around 10 miles away and the reputation is just really highly regarded and so I started digging into it a little more and found ‘Hey they have this data-science thing’ – which is very interesting to me because of what I’d previously done in my careers before and has a lot of application,” Hollinberger said.

Though only three weeks into the semester, Hollinberger said he has liked Jewell thus far and still enjoys being a student, though he explained that being a student in 2018 is different from being one in the late 1970s.

“There are two kinds of differences, and the big difference is just inside of me. I am way more disciplined now. I have better studying habits now than I did way, way back then,” Hollinberger said. “The other difference is to look around and see other students and you guys have a lot more technology and helpful tools to help us do stuff – like Slides! That had not even been invented! So yeah, a lot of good stuff to use which is cool, but as we all know, it all comes down to study time and getting it burned into the brain.”

Hollinberger was a naval officer for 27 years, and he explained that, for the right person, the Navy could be a great career. For him, it was the perfect fit.

“I loved every day of it. So I was a young kid out of college talking to the person who sends you where you will go, and I said ‘Hey I have never been out of the country before, I would like to go see things,’ and he said ‘Well how about Iceland?’ Well, that was fine by me! It was exciting, totally exciting. It was back in the day when there were Russian submarines in the North Sea and that sort of cool stuff,” said Hollinberger.

Hollinberger’s career as a naval officer took him all over the world, and he listed in sequence the places he had been stationed at.

“Iceland; Georgia; Panama; Gulfport, Miss.; Spain; Cuba; Monterey, Calif.; Charleston, S.C.; San Diego, Calif.; London, England; Washington D.C.; a place called China Lake – a classified place up in the high desert of California –  and then back to D.C.,” said Hollinberger. “So you can see as my career progressed to higher levels it was more office and policy kind of work, but in the early days it was combat construction and hurricane disaster relief.”

Having traveled extensively for a good portion of his life, Hollinberger is a strong advocate for experiencing different cultures, and he approves of the opportunity that Jewell’s Journey Grant offers students.

“That is great stuff, yeah. I mean I have checked that box, so I am not sure if I will do that, but it gives you a great frame of reference for so many things. I have been to a lot of places, so if you see it in the news, you can say oh yeah, ‘I know that’ or ‘I know how hot that is’ or ‘I know how nice that is’ – that kind of stuff. The best thing my family ever did was to take a two-week vacation to the Holy Land – that makes Sunday school a whole lot more relatable!” Hollinberger said. “Traveling is a really good thing, it gives a good frame of reference. Then if you can travel and be there long enough to hang out with the locals – like your pastor here helps you get into things where you are not just a tourist, you are actually with the locals – you can see a different culture’s approach to day to day life. It is good to understand that and to be in that for a little while.”