William Jewell College was founded in 1849 as a private liberal arts institution. Since then, Jewell has been known to provide a liberal arts education “unmatched in the Midwest.” In 2017, Forbes magazine ranked Jewell as the #177 liberal arts college in the country. Despite these accolades, in July 2016 Jewell initiated a Brand Mission campaign, led by new president Dr. Elizabeth MacLeod Walls, to improve the institution. This article is the first installment in a series highlighting the key players and dimensions of this campaign.

The Brand Mission began with an intensive period of data gathering and analysis. Jewell partnered with Kurt Bartolich, Founder and Brand Internalist at Gutsbranding, who led a series of focus groups and panel sessions to identify fundamental elements of the Jewell experience. Each of these sessions focused on a different constituent group. These included faculty, staff, donors, trustees, students separated by year and roles on campus and employers in the Kansas City area.

These sessions collected qualitative data to identify Jewell’s desirable aspects. Data concerning Jewell’s Net Promotor Scores (NPS), an index ranging from -100 to +100 that measures the willingness of customers to recommend a company’s products or services to others, was analyzed to assess students satisfaction.

This process generated and analyzed 2,500 responses.

The Jewell Philosophy then guided the Branding Mission’s next steps.

In late 2016, Jewell partnered with Jason Parks, 1998 Jewell alumnus and Managing Director at Barkley, a marketing firm based in Kansas City, to design marketing materials and a campaign reflective of the recently established Jewell Philosophy.

Campaign strategies include billboards erected in the Kansas City metropolitan area, a redesign of the Jewell website, paid social media advertisements and a Branding booklet. So far, the cost of this campaign has been $1.1 million, all of which has been fundraised. 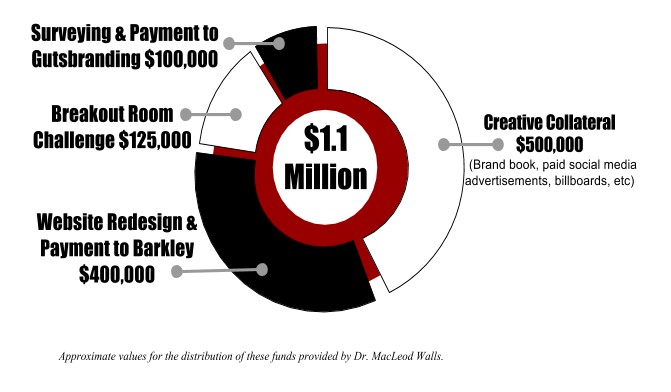 However, the remaining costs are expected to be lower than those of the past 12 months as certain expenses, such as the website redesign, are not recurrent. Beginning fall 2018, the expenses will be incorporated into Jewell’s annual budget. To achieve this, MacLeod Walls has adapted the budget structure to include funds specifically allocated for marketing and outreach.

“We had not historically put marketing dollars in our budget, hardly at all, which is something that I changed very quickly after arriving,” said MacLeod Walls.

As well as increased engagement with the external community, the Branding Mission has catalyzed change on campus.

The Mission identified positive and negative aspects of the Jewell experience, and this information has informed recent policy changes.

“You have blind spots and bright spots when you begin to do this work, you begin to see where critical thinking and leading a meaningful life is flourishing on this campus, flourishing with our faculty, our students and our core curriculum,” said MacLeod Walls. “But, I’ll give you an example that resonates with students, it was not working in terms of Student Life policies and it’s still not working, at least I don’t think, in terms of how we value the residential experience. So, those are blind spots for us. It actually was the thing that allowed us to look at the alcohol policy last year. That was a huge win, for students and for us. It’s a beginning, we have other work that we need to do around the blind spots, we also need to keep lifting up the bright spots.”

The Branding Mission is also being used to inform other changes on campus, including residential hall and Mabee Center renovations, access scholarships to increase diversity on campus and endowing the Oxbridge and music programs.

According to MacLeod Walls, no staffing changes have been related to the Brand Mission.

Responses to the Brand Mission have been positive, with faculty and alumni showing the most enthusiasm for the campaign. The one constituent group which has not had an overall positive response is current students, who are generally skeptical about the project.

“The one group that has not responded consistently is current students. Everyone else is saying, ‘Yay, this is great!’ […] but, understandably, and in fact reinforcing our Branding Mission, our students are the ones who, spring of last year, were saying to me, ‘Okay, we get it and we really like this idea. But, Brand Mission seems really corporate, can we talk about how we can get away from that. And, are we really living this out?’” said MacLeod Walls. “There’s a greater amount of skepticism from current students, and a question about language use, which has been great.”

Despite being aware of student skepticism, MacLeod Walls is pleased with the internal community’s response to the Branding Mission.

“This is our philosophy, it’s in our bones; it’s not a brand, it’s who we are,” said MacLeod Walls. “Students have helped in this to say, ‘Okay, cool, love it. But, I’m going to question you, I’m going to ask about this, push on this,’ and it’s gotten better every single time. Keep doing that. I would say that you can’t be a critical thinker unless you’re questioning the efficacy of something. If you take everything at face value then you’re certainly not learning how to think.”

MacLeod Walls hopes that eventually the overall NPS will be +10 percent, though there is no established timeline.

“Our goal is to get up to a positive 10. We’re not there,” said MacLeod Walls. “There’s no timeframe. We just, we were hoping we’d be along further this year than we are. But, we’re still glad that we’re in the positive numbers. The student athlete number is still not as high as we’d want it. It’s still in the negatives.”

To monitor progress, Bartolich will continue to survey relevant constituent groups. The next round of surveys will be conducted this winter. Groups to be resurveyed are alumni, business leaders, faculty and staff, including athletics, and leadership.

According to MacLeod Walls, the Brand Mission, particularly marketing, is being implemented through four pillars. These are getting noticed, recruiting, reassuring (staying true to the Brand Mission on campus) and retaining. These apply for both potential students and potential investors.

With these four pillars in mind, the Brand Mission success will be assessed by the level of engagement the external community has with Jewell in the years to come. The results of these assessments will be used to inform future marketing decisions. Regardless of what the outcomes are, current Brand Mission products will remain central to Jewell for the foreseeable future.