Dr. Ray Owens has been teaching in the psychological science department at William Jewell College for 35 years and will be retiring at the end of this year. Owens has taught a variety of classes over the years, but in recent years his routine has mainly included developmental psychology, abnormal psychology and the psychological capstone class. Developmental Psychology is Owens’ favorite class because he loves talking about children and families.

“I’ve been fascinated with children and families and the influence that we can have, parenting styles, that kind of thing. I think how we raise children is an extremely important issue in our society and they aren’t raised the same way they used to be. In some ways that’s a good thing. We don’t hit kids as much as we used to. On the other hand, we let them do whatever they want, more than we used to,” said Owens.

Owens hasn’t always been interested primarily in psychology. Initially, Owens majored in Christianity at Houston Baptist University with the intention of going into ministry work. Houston Baptist required every student to have two majors. Because Owens had previously taken and enjoyed a psychology class, he chose psychological sciences. Near the end of his undergraduate studies, Owens decided to focus on psychology as his line of work instead of ministry work.

“When I was a senior I had a job as a minister of youth at church. I liked working with the youth, but working with the parents of the youth at the church was not my cup of tea and I decided I would go into some other line of work and psychology was my major so I started doing that and loved it,” Owens said. 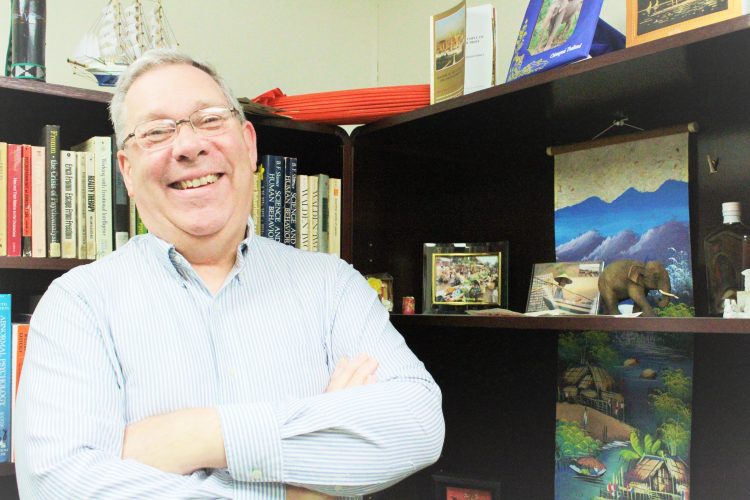 Owens got his bachelor’s degree from Houston Baptist and went on to graduate school in Utah. He completed further master’s work at the University of Houston-Clear Lake in Houston, Texas. Owens was still working on his doctorate and was all but dissertation when he started looking for work in order to support his wife, Penny, and first child, Candace, while also finishing his dissertation.

“I looked at all sorts of jobs and I applied for many. I sent my resume to the Baptist College Association, so I did not apply directly to Jewell, but they had seen my resume and they called me and asked me if I was interested in teaching and I thought it sounded like fun. So they interviewed me and I guess I fooled them,” said Owens.

“Fooled them” might be a bit of an understatement. Dr. Owens has been teaching psychology at Jewell for 35 years and has been making impactful relationships with both his students and colleagues.

“That’s probably been the most rewarding part of the experience. Just being in relationship in so many different ways, from classroom experiences to outside kind of things,” Owens said.

During some of the earlier years of Owens’ time at Jewell, there was a January term where students had a “Winterum.” This was a time where students were required to take a class for the month of January and usually they were a little unorthodox and didn’t usually have to do with students’ majors.

“I got involved with the ski Winterum where we took students to Colorado to ski for a week. It was a great experience for 10 years or more and I would take my kids along and they would also get to ski,” said Owens.

For many years, Owens also assisted with the spring break trip for the Habitat for Humanity students.

“We often went to Florida, Texas once and New York one time. Seeing the students in that kind of environment and serving other people was a really special experience,” Owens said.

Besides the relationships with students and colleagues, Owens has also enjoyed the travel opportunities Jewell has afforded him. In his office, Owens has a map filled with pins that signify all the places he has traveled, many because of Jewell. Owens taught at Harlaxton College in England in 1993 and in 2007, he taught in Hong Kong in 2010 and he went to Ecuador with the Jewell Summer Grant to take Spanish lessons.

After retirement, Owens plans on adding pins to his map and traveling with his wife, Penny, and his family.

“Penny and I tell people that we’re going to travel until the money or the health runs out, whichever comes first,” said Owens.

Owens already has many trips planned. Starting right after school is over this year, he has planned a trip with a friend to go to Israel. Right after that trip, Owens plans on taking his family and grandkids to Disney World. One item also on the list is to see New England in the fall.

“One of the things that I’m really looking forward to is going to see New England in the fall and I’ve never been able to go during that time because I’ve always been teaching because it doesn’t come on a schedule, you’ve got to go when the trees start changing. We’ve never been able to pick up and go, but we should be able to now,” said Owens.

A cruise to the Arctic Circle, a cruise to Russia and places on the Baltic Ocean, Australia, New Zealand and Hawaii are all on the itinerary.