Last night, the William Jewell College and the Liberty community held a peace rally on campus.

Jewell students, faculty and staff, including president Elizabeth MacLeod Walls, attended the event. Other attendees were members of the Liberty community including City Councilman Harold Phillips. Total attendance was about 80 people. The rally was held at the Peace Pole and aimed to promoting peace and unity.

Frequently overlooked, the Peace Pole is a wooden monument that says “May Peace Prevail on Earth” in eight languages on its sides and is located between Grand River Chapel and the schoolhouse. This is one of thousands of Peace Poles around the world. Their purpose is to serve as reminders to pray and strive for world peace in our everyday life.

“Jewell’s rally for peace and unity is a positive event to give voice to the important values that we hold as a campus revolving around the ideas of peace and unity,” said Dr. Jeff Buscher, College Chaplain.

“When faced with violence, it is everyone’s responsibility to put good intentions and words into action and to make a statement about who you are and what you stand for. Discouragement is not an option because too many people need others as witnesses, standing up for peace and justice and love. Here at Jewell we are doing just that in our upcoming Peace Rally,” said Shaneann Fross, sophomore Oxbridge Molecular Biology major and president of the William Jewell Catholic Fellowship.

Buscher received a lot of support for the event and assisted the student organizations in coordinating the event over the last month.

“During the first week of classes, our chaplain Jeff Buscher mentioned this idea to me, and I instantly hopped on board. As a leader of an organization who proclaims to follow a figure who promoted peace his entire life, I think that it is important that we Christians participate in events like this… I think the Jewell Rally for Peace and Unity will showcase this dynamic to the student body and also to our Liberty community. Finally, in regards to current events, I think it is imperative that Jewell stands for peace and proclaim a message of unity rather than division and violence,” said Brooklynn Matlock, junior international relations and French major and president of CSM. 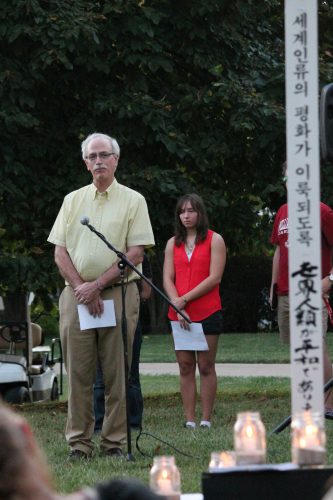 Councilman Phillips also expressed support and appreciation of the event.

“There were about 80 students here, a wide range of people, a nice program, nice diverse program. I’m grateful you all were thoughtful enough to include the city of Liberty and that I got to represent the city,” said Phillips.

While recent events in the U.S. and around the world were the initial motivation for a peace rally, the event also has a much larger purpose.

“If I were to give this one purpose, I think it is for unity on campus…To be able to say, ‘We’re all in this together’ because each of the readings, each of the statements are really about how we are all one and let’s celebrate that and let’s share different perspectives about that,” said Buscher.

Buscher also cited the Center for Justice and Sustainability’s yearly theme of “awareness reduces bias” as part of this overarching goal. Organizers hoped the rally would help raise awareness of and reduce bias in the community in which we live and work.

Although not a direct part of Jewell’s Diversity and Inclusion Plan, this event was clearly correlated with the mission to increase diversity and inclusion.

Buscher wanted the student organizations to play a large role in the planning and orchestrating of the event. Representatives from each of these organizations spoke last night, some choosing to read poetry, others offering prayers and words of solidarity. In addition, MacLeod Walls read a passage from Virginia Woolf, and Phillips reflected on how unity has changed in the Liberty community since the Civil War era.

“As a campus, we identify as critical thinkers. As critical thinkers, we must be open-minded and value diversity, diversity of people and ideas. WJC Feminist Club strives to gain awareness and understand intersectionality, a web of social identities, in order to push William Jewell College’s inclusivity and peace,” said Seki Anderson, senior biochemistry major and president of the WJC Feminist Club.

Buscher’s hope for the event was to spark action beyond the hour of the rally. Elliott Yoakum, sophomore Oxbridge Literature and Theory major and president of QUILTBAG, also spoke of this need for action.

“We must understand that this rally is to promote peace and unity, but we must also understand that peace and unity cannot occur while there is still injustice. If there is still systemic racism, homophobia, sexism and other bigotry in society, we should not be espousing ‘peace,’ as that turns into dismissal. More often than not, peace and unity, are pacifying words, i.e. trying to smooth over situations that need to actually be addressed. Instead of passive, our peacemaking should be active. If we truly want peace to prevail on earth, each of us need to take action,” said Yoakum.

Cards were available at the rally with a list of action plans, things everyone can do. These include engaging in challenging conversations related to diversity and inclusion, using gender neutral language, attending a Showing up for Racial Justice meeting in Kansas City, reading Barack Obama’s essay on feminism, contacting your senators and representatives about issues you are passionate about, attending and supporting a Kansas City for Refugees meeting and supporting efforts to help students supported by the Deferred Action for Childhood Arrivals. These are just a few of many things one can do.

“Go out in your own communities, confront your family, friends and neighbors about bigotry, truly listen to concerns from people of other identities, read diverse literature, watch diverse film and TV, do not accept excuses for any form of bigotry, work to understand structures of inequality within your society, recognize your own privilege,” said Yoakum.