The KCPP is a no kill animal shelter operating in the greater Kansas City area that focuses on adoption of homeless or abandoned pets and creating a “No Kill Kansas City.” A major part of creating a city with no kill animal shelters is the ability to foster animals until their adoption. Fostering keeps shelters from becoming overpopulated, which is the main reason some shelters still see the need to euthanize when they get too crowded. Fostering also creates awareness about the dogs up for adoption, since more people will come in contact with a fostered dog than if it were only seen by those who visit the shelter.

Siuda has been volunteering with KCPP for the past three years and recently decided to bring the project to Jewell. By starting her own initiative, Pawsitive Interactions, Riley has made Jewell a haven for shelter dogs.

“Pawsitive Interactions gives students the opportunity to interact with dogs on campus. My goal is for the foster dogs to become a campus-wide project in taking care of and promoting/advocating to find each foster a home,” said Siuda.

First, she had to make some changes in Jewell Policy.

Currently, Jewell has a “No Pet Policy” in place for students who are required to live on campus all four years. Siuda sought to change this regarding foster dogs. By visiting Stephen’s College, a pet friendly school, in the spring in order to get to know how their foster program works, Siuda put together a proposal that adhered to Jewell’s Emotional Support Animals Policy, Stephens College’s Pet Program and KCPP’s foster contracts to try and change the policy at Jewell.

“The proposal started in the Student Life office and worked its way up the chain of command to the Provost, who spent the summer looking into the logistics of such a program on our campus. Pawsitive Interactions was approved for a trial phase this semester,” Siuda said. 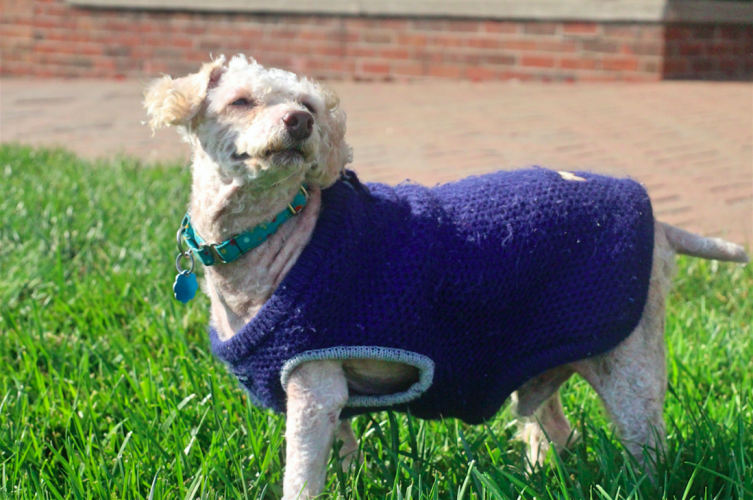 By getting in contact with some Resident Directors (RDs), Siuda was able to find dogs at the shelter foster homes right here in Jewell dorms during Pawsitive Interactions’ first trial period. Katie Wilkinson, Resident Director in the upperclassmen triangle, also realized the benefits of taking in dogs and decided to join the foster program when Siuda reached out to her. As of now, Wilkinson has fostered two dogs through KCPP while at Jewell, an 11-month-old black lab shepherd mix named Rooster and an 11-year-old mini poodle named Bastian.

“I would love to get students involved with something new and different on campus,” Wilkinson said.

Fostering the dogs in such a concentrated setting gives students more exposure to the program and can make a student’s day just by being able to pet one of the fostered dogs.

“Students have responded really well. They have actually been really excited and engaging and ready to play with the dogs,” Wilkinson said.

Not only do students get to interact and play with the Jewell foster dogs, interacting with them can also open doors to volunteer work and jobs assisting with the shelter. Students can get involved with the KCPP in other ways as well, such as marketing for the shelter and raising donations.

This does not only affect students. The foster program has a big impact on the Jewell staff. Staff can get involved with the KCPP whether it be through the routes listed above or fostering a furry friend of their own. Staff have also gone so far as to adopt the dogs that their coworkers have fostered. It took only six days of boarding for Wilkinson’s first foster, Rooster, to be adopted by Tracy Hart, Administrative Assistant and Coordinator of the Truman Scholarship Program.

The amount of interaction the animals get not only benefits the people on campus, but the animals too. 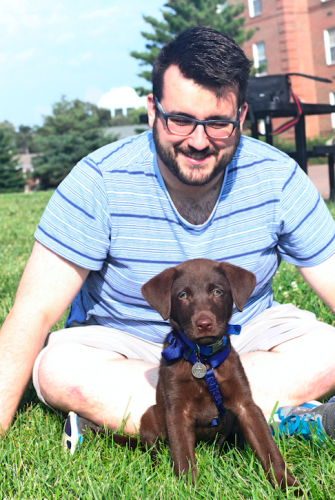 RD Ryan Zavacky with his puppy Frank, who is not a foster dog, but still a furry friend at Jewell.

“The beauty of fostering is that it gives an animal one-on-one care, a personal advocate, as well as opens up a kennel for the next animal that arrives at the shelter,” Siuda said.

Another benefit is that because more people see the fostered pets than say, in a neighborhood that is not as interconnected as a college, the dogs may get adopted faster.

“The shorter the foster period the better… we want to get [the dogs] in their forever home with their new best friend,” said Wilkinson.

To see pets that are being or have been fostered and adopted through Jewell, or to get involved with the KCPP itself, visit this Facebook page or KCPP.

A previous version of this article was publish with inaccuracies. The Monitor has updated it to include the corrections.

PreviousPrevious post: Jewell holds rally for peace and unity
NextNext post:Out with the old, in with the new: The truth behind Residence Life changes