This is what four William Jewell students­­ Jesse Lundervold, Blair Sundhausen, Chandler Eaton, and Daniel Bittel­­ did this past summer as the National Park Service (NPS) celebrated their 100th year anniversary. This slogan was propagated by the Great Northern Railway as they attempted to converge the $500 million that Americans were spending annually touring Europe to see the natural beauties of the United States. The Great Northern Railway, running from St. Paul, Minn. to Seattle, Wash., championed Glacier National Park as “America’s Switzerland.” Other US railways such as the Northern Pacific and the Southern Pacific mobilized middle-class Americans and allowed them to explore the nascent protected land of Yellowstone, Mount Rainier, Yosemite, Kings Canyon, Sequoia and Crater Lake at the turn of the 20th century. 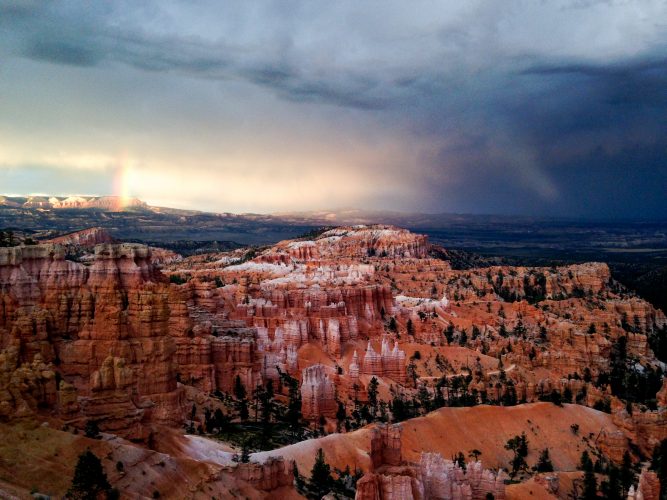 Bryce Canyon was designated as a National Park in 1928. Photo by Blair Sundhausen.

Four William Jewell College students discovered the wonders of the national parks this summer. Jesse Lundervold, junior chemistry and studio art major, was stationed in Rocky Mountain National Park for around 11 weeks, interning for the Rocky Mountain Conservancy—a nonprofit that focuses its conservation in Estes Park, Colo. As a member of the Conservation Corps, Jesse completed conservation projects with 36 other college students from across the country. 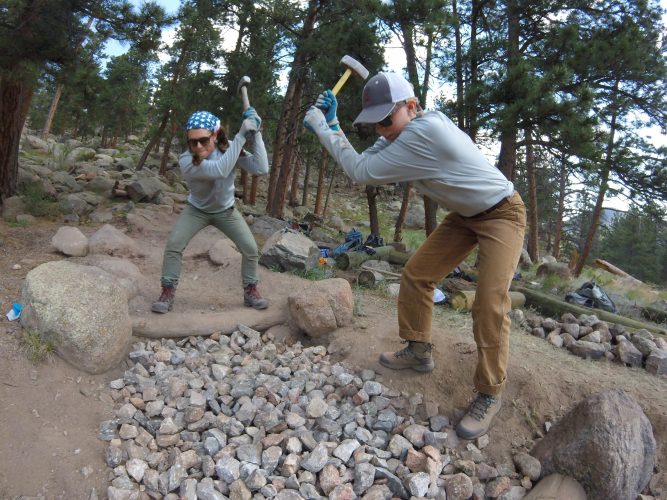 “Before working in Rocky, the concept of mountains wasn’t tangible whatsoever. After being able to see the entirety of the mountain range from [the North Longs Peak Trail] made it really sink in that I was actually there…actually 10,500 feet in the sky,” said Lundervold, describing her most unforgettable moment in the park. 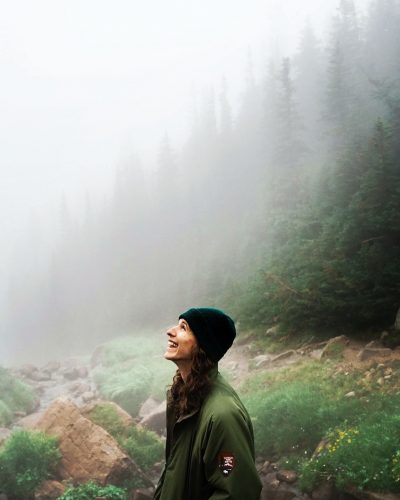 “To be able to wake up each morning and work towards protecting the ecological integrity of one of the most beautiful places in the world was truly a dream true,” said Bittel. “Working for the patch (the National Park Service emblem) was working for something much bigger than yourself.”

Daniel Bittel, a senior studying biology at Jewell, also worked in Rocky Mountain National Park from late-May until early-Aug. Bittel worked on the exotic plant management crew in the park as a biological science technician.

Bittel and Eaton unraveled the seemingly paradoxical dual mandate of the National Park Service’s mission. The Park Service’s commitment to educating and inspiring populations is a necessary component for the wildlife’s conservation.

“For many people serving in the park service, the preservation is more important, but without education and inspiring, we won’t have enough passion for preservation in the next generation,” said Eaton.

“The duality of the NPS mission statement truly represents the yin and the yang of the parks—without one, there can’t be the other,” said Bittel. “I personally have an affinity for working on the conservation side of things, but anyone working in the parks should understand and respect the relationship between the two sides.”

Blair Sundhausen, junior nonprofit leadership major, worked on behalf of the inspirational side of the National Park Service’s twofold mandate. Sundhausen was stationed in Bryce Canyon National Park in Utah through A Christian Ministry in the National Parks (ACMNP). ACMNP is a nonprofit organization that orchestrates worship services and stresses relational ministry for employees and visitors of the national parks. Sundhausen led Sunday worship services with two other women and worked at the general store at the lodge at Bryce Canyon this summer. 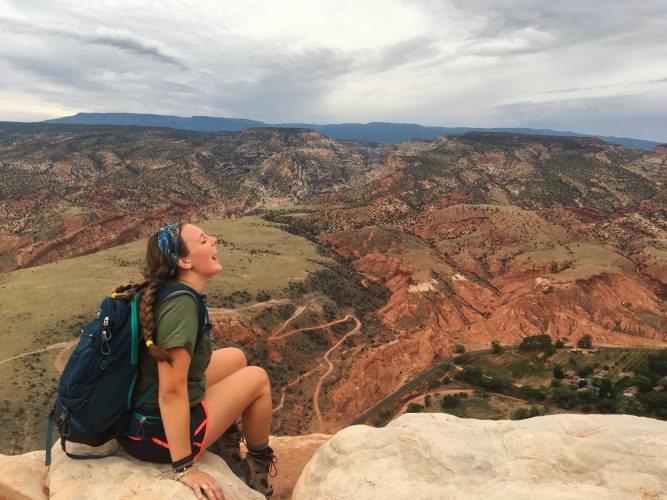 The national parks facilitate understanding and overturn misconceptions about the natural world. Bittel received questions from tourists such as, “Why are you painting all the flowers blue?”

“I’ll admit that…I was asked, ‘Where can I go to take a photo of the Rocky Mountain?’ THE Rocky Mountain, of Rocky National Park. She had a point, I guess,” said Eaton.

With frequent international visitors, the parks also facilitate understanding between diverging countries and traditions. Sundhausen described her experience teaching a couple from the Netherlands how to construct a proper chili dog.

“They gave me a look that made me think they questioned my sanity. So I went over to the food station and showed them how it is done. They looked at me with a ladle full of chili in their hands like, ‘am I doing this right?’ It was definitely an experience to teach foreigners [about] American cuisine,” said Sundhausen.

Sundhausen also worked alongside many Turkish and Siberian employees. “The majority of them came to work in the park right after the attacks on Turkey. I was able to learn through direct conversations about their culture and how wrong the stereotypes are,” said Sundhausen. 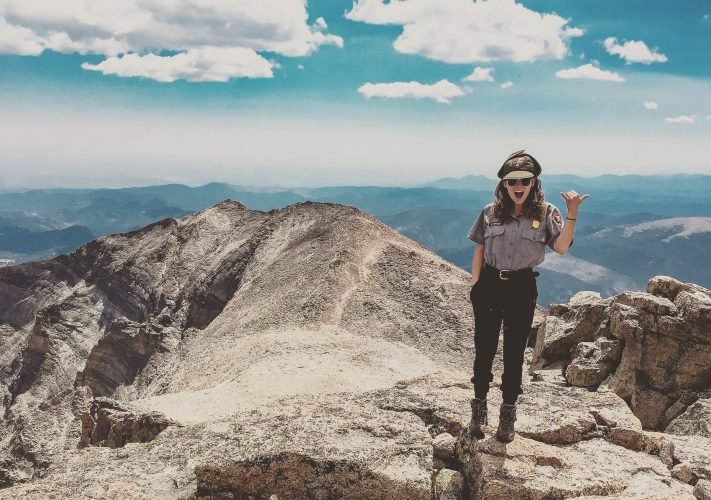 Eaton directed hiking excursions for Australian families and engaged in healthy political debates with individuals traveling from Israel. “I definitely got caught up in too many political debates for someone in a federal employee outfit, but it was great to have exposure to the perspectives of travelers my age that were actually living through the Israel-Palestine conflict,” said Eaton. 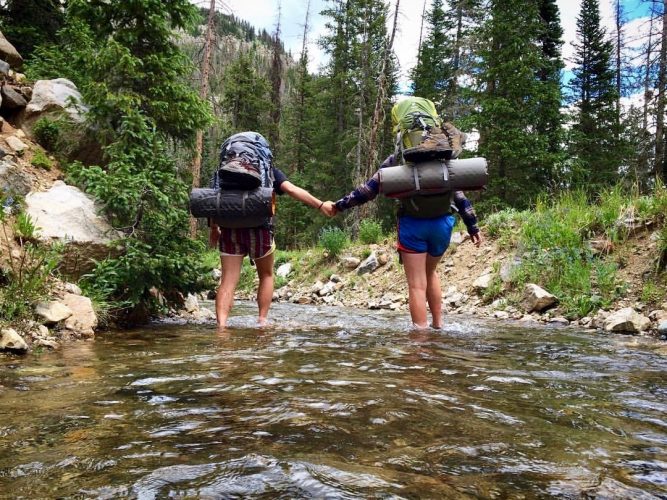 Lundervold and fellow trail worker enjoy a weekend off exploring the park.

These Jewell students have their sights set on exploring everywhere from the raw wilderness of Denali National Park in Alaska to the woodlands of Acadia National Park in Maine. Sundhausen and Lundervold urge others to first see the America showcased in the national parks.

“Experiencing the amazing natural aspects of our country is so important!” said Lundervold.

“Each [park] is diverse and beautiful in their own way. They help you discover what America is like behind all of the cities, people, hustle and bustle,” said Sundhausen. 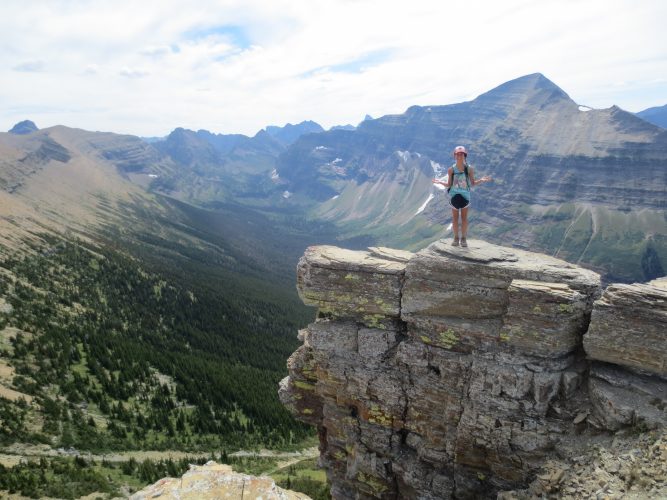 “I’m a firm believer that truths manifest themselves in nature,” said senior Mikayla Roller who worked and lived in Glacier National Park for the summer of 2015. “The national parks are important because they allow humans the space to not just learn about but also experience these truths.”

For more photos of the National Park Service in the centennial year, visit Photo Feature: Summer in the Park Service