Senior Oxbridge Literature and Theory major Erin Melton ran in the Kansas City Marathon Saturday Oct. 21. She has run three half marathons in the past, but this was her first full marathon.

“I just felt like it was the next thing to do,” said Melton. “I had run half marathons and I thought if I can do that I can go ahead and just train for a full just to have that experience…I guess I just wanted to see if I had the mental and physical willpower to just do it.”

Since finishing her last half marathon in September 2015, Melton continued to stay in race shape. However, she faced setbacks last year due to injuries to her left achilles tendon and knee. Melton strained her achilles tendon on a solo backpacking trip during a break from her study abroad at the University of Oxford.

“I went and saw a doctor and did some cross-training for a few weeks and then slowly started coming back. And then, I increased my mileage too quickly and hurt that same knee. So again I just did some strengthening exercises and took some time off and then was just much more careful with how quickly I increased my mileage,” said Melton.

She began seriously training for the marathon early last summer.

“I began actually training, following a schedule, for the marathon about mid-June and just basically increased my long run every week and did some speed training and got up to 20 miles as my longest run before [the marathon],” said Melton. 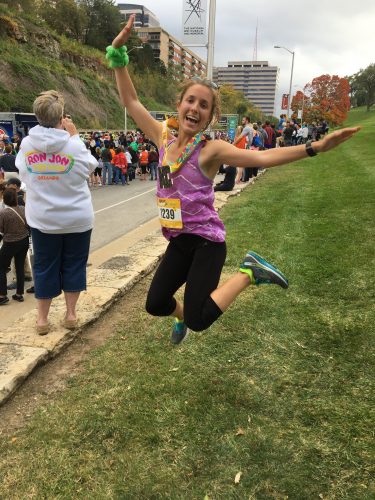 Melton after the race

Melton said her training regimen sometimes hindered her social life. She recommends that individuals considering training pick an opportune time in their lives.

“I recommend choosing a time in your life when you can kind of be selfish with your time and when you’re not going to be sad about having to skip a night out because you have a long run in the morning,” she said. “Because it’s a time commitment and it’s an emotional commitment, so being prepared to just be in pain sometimes is important.”

Her commitment to training was successful. She ended up finishing the race more quickly than she expected.

“My only goal was really finishing. It was my first one so I wasn’t trying to PR,” said Melton.

In the middle of the race, Melton drew her energy from the crowd and her fellow runners.

“About halfway through my leg started shooting some pain but there were lots of posters and cheering fans on the side and so the adrenaline was really, really helpful,” she said. “There is something to be said about the community of runners all being there that day. It’s a big party at the finish line and the endorphins are great.”

She felt a bit differently the next morning once all the endorphins had worn off.

Despite the pain and sacrifices, another race is not completely out of the question for Melton.

“I don’t know. The weeks leading up to this one I was saying repeatedly that I would never do this again because my body hurt so bad and my life was just ruled by when I had to run. But after finishing it, who’s to say. It’s possible,” said Melton.