In an all-campus email sent Feb. 1, William Jewell College President Dr. Elizabeth MacLeod Walls announced that the school would be launching “Phase One of a comprehensive effort to renovate and redesign our first-year residence halls.” The email explains that through a gift from Mark and Karen Mathes, Liberty residents and 1979 and 1980 graduates of Jewell respectively, the College will begin renovations on Ely Hall in March. Plans for an outdoor first-year quad and a new residence hall constitute Phases Two and Three.

The College closed Ely Hall for the 2017-18 academic year to begin these renovations. Last fall, the campus community had few details about the project, but MacLeod Walls’ email provided information on the scope and timeline.

The Monitor sat down with MacLeod Walls for more details on the project, including how the College decided on this project over others, specifics regarding what’s to be done, a rough timeline and how the College will combat low enrollment and keep the newly-renovated spaces occupied.

“We knew when we did our survey work last year with Kurt Bartolich consistently a theme from the students was, ‘We love Jewell, we wish we had the caliber of living space that we have in terms of our educational space,’” said MacLeod Walls. “This wasn’t news to us, but just the consistency of it was something I realized we needed to pay attention to.”

MacLeod Walls decided that the first-year dorms are the place to start. Upper-class dorms are generally in better shape, particularly Melrose, which went through extensive renovations after the 2003 tornado.

An architect studied what would be possible.

“We looked really closely at all three of those buildings, and at the end of the day, what we realized was that, of those three, Eaton probably has the shortest shelf life for a variety of reasons,” MacLeod Walls said. “It wasn’t really built to be around as long as it has been. Browning is in a similar situation, but it’s 12 years younger than Eaton.”

Jewell’s architect is Gould Evans, and the school has worked with the firm on many quad projects. The school did, however, change construction companies from JE Dunn to McCown Gordon.

“We visited with both of those construction companies and what McCown could offer us was, at the end of the day, more appealing, and they already had a turnkey relationship with our architect,” said MacLeod Walls.

The project, as noted earlier, will consist of three phases. Phase One is a renovation of Ely Hall, which will cost around $3.5 million.

The College constructed Ely in the early 20th century. The most recent renovations to Ely occurred in summer 2016 when the College updated the bathrooms and installed new hall carpet and ceilings on the first and second floors. Ely has always been a favorite among first-years. The hall is community-oriented and according to MacLeod Walls has great resonance on campus and with alumni.

“We’re going to start with about half that and do a deep cosmetic renovation of Ely,” said MacLeod Walls. “So this lead gift that we received…allows us to do that and allows us to get started in March. So we know for sure we’re going to have a renovated space by the time the fall comes around.”

According to Ernie Stufflebean, Associate Dean of Students and Director of Residence Life, the Ely renovation will include specifically new wall surfaces, flooring, ceilings and LED lighting, all of which will compliment the renovations done two years ago.

The College continues to pursue donations for the remainder of the project.

For projects in which a single donor provides a majority of the funds there is always the concern that their desires for the space will be put above the needs and desires of the students and the College. MacLeod Walls assures that this is not the case.

“The Mathes’ have not, they are not prescribing any part of this,” she said. “What they have said is, ‘We trust the work that you want to do, here is our gift to you, use it in the best possible way,’ so they are not influencing the decisions we make.” 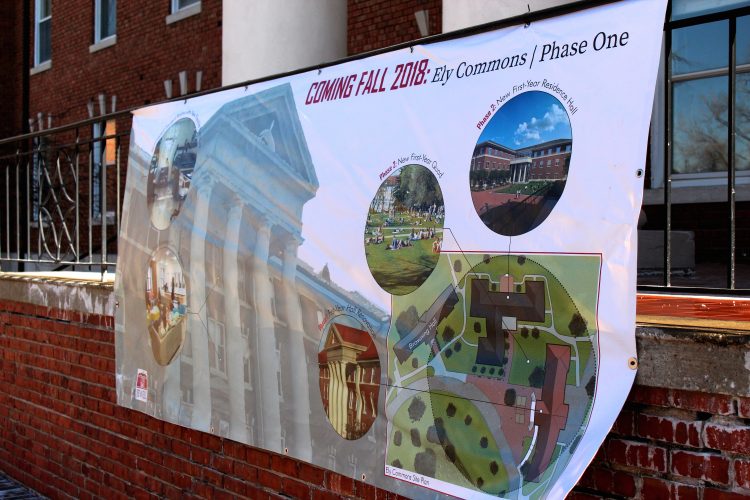 Phases Two and Three of the first-year commons project do not have a set timeline, but MacLeod Walls hopes to finish fundraising by the start of the 2018-19 school year.

“The long range plan is to do the rest of that work in Ely and also to build a new residence hall where Eaton is,” said MacLeod Walls. “We are in the process of trying to raise money for that too. And there is an outdoor component to that, too, which is around $1 million which would really transform that whole—we call it a triangle right now, but we want to call it a commons—common space.”

One of the main goals of the first-year commons project is to enhance community and “to reflect our philosophy in our living spaces.” In doing this, MacLeod Walls believes that Ely and the new first-year hall will not just be empty space.

“Ely is going to be the hall that our first-year students go into, and then of course the idea would be that for the new hall enrollment is growing and we’re putting students in all three of those spaces,” said MacLeod Walls.

Stufflebean believes that enhancing the quality of first-year residential life will increase enrollment and that the project will raise retention rates.

“Similar to the influence on enrollment, residential facilities and how they’re utilized can build community and foster relationships, which can positively impact student retention rates,” Stufflebean said.

Since the project’s announcement, some student have voiced concerns. At the February Senate Town Hall students asked questions about the possibility of renovations to upper-class dormitories. Questions have also been asked about whether living in Ely post-renovation will cost more and about why Eaton is to be razed instead of Browning.

MacLeod Walls hears student questions about upper-class housing. She states that it is next in their planning.

“We are hopefully going to do a master plan and we’re talking to JE Dunn about that actually,” said MacLeod Walls. “And if we do a master plan then what would be included in that would be a long range plan for all of our housing. Honestly, Elliott, my interest is to get as creative with that as possible. So, thinking about different kinds of living spaces than what we have now. In a perfect world, we would have apartment style, or it would be more collaborative learning and living spaces. So that’s next, that is absolutely next. But we want to invest in this part of it first.”

Stufflebean echoes MacLeod Walls, and he notes the recent work done to Jones and Semple.

“Jones Hall received quite a bit of work in the past two years,” Stufflebean said. “Work in Jones included new room furniture, new paint, kitchens were renovated, a new lounge was added to the second floor off the northwest kitchen, the laundry room was renovated, new door hardware was installed along with new room numbers and lighting. Prior to work in Jones, Semple Hall received attention as well. Wood laminate flooring was installed in the sleeping rooms of the west and central wings, rooms and hallways were painted and drop ceilings with new LED lighting was installed.”

Both Stufflebean and MacLeod Walls assured that the future of all campus housing will be part of ongoing conversations.

As for Ely costing more, the answer is no. Additionally, Browning is 12 years newer than Eaton, and that is why it will stay for now.

Overall, MacLeod Walls and Stufflebean are enthusiastic about this project and the prospects for enhancing the Jewell experience. The renovations of Ely will start in March, and there will no doubt be further updates about Phases Two and Three of the project as the semester progresses.