Hemenway has been working in music for the last decade, previously as the marching band director at North Central College in Illinois before coming to Jewell in 2014. His most recent project has been the creation of a drumline to play at events such as sports games, alumni gatherings and community shows and to “offer a totally different kind of [musical] experience to students who want to take advantage of it.”

“There’s only one player who has ever drummed before. We have clarinetists, flutists and singers. Its incredible to see them light up through this drumline, a totally new musical experience for all of them,” said Hemenway.

The drumline debuted two weeks ago, playing at a football home game, and plans to support the athletics department by playing at home games for the remainder of the season.

“We talked to the coaches and the athletics department and they said that just having them [the drumline] there totally changed the tenor of the game, the spirit of the game,” said Hemenway. “We felt it there and we’ll feel it again; you’ll [Jewell students] see them at homecoming. They just bring a lot of enthusiasm and a whole new dynamic.”

Hemenway went on to explain that in a college of this size it is extremely uncommon to have a music program, let alone one as extensive as that here at Jewell. With opportunities like the choral scholars, handbell choir and now the drumline, Hemenway is ensuring that even though Jewell is small, there really is something for everyone in the Jewell music community.

“We make up an integral part of the Kansas City musical tapestry, our musicians, our bands. We’re a huge part of it,” said Hemenway.

Though, there is always room for growth. Hemenway explains that the process of starting this drumline has taken over a year, involving extensive planning writing grant requests and contacting a number of potential donors. It was not until last year when a grant was received by the Richard J. Stern Foundation for the Artsthat this vision could become a reality. With this grant a huge amount of the music department’s facilities were able to be repaired and updated.

“The last time Jewell Music has had such a large number of new instruments was in the ‘80’s,” said Hemenway. “That was nearly 40 years ago!” 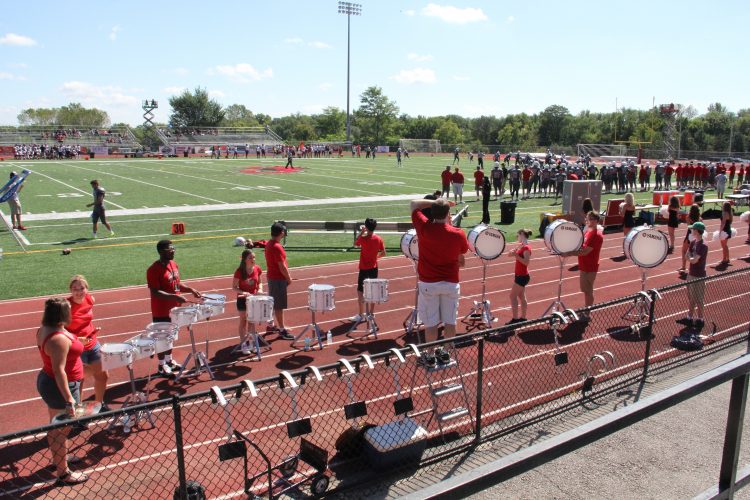 After witnessing the success of the drumline already this semester, Hemenway plans to develop the project, ideally expanding to 12 or 15 regular players in the next few years and playing in events like next year’s Liberty fall parade. Though he emphasizes that the drumline is not the only project the music department is developing, and he encourages students to approach him if they are interested in joining one of the many instrumental ensembles at Jewell or if they have music they would like to perform.

“We want you [the students] to know that if you’re interested in doing something in music then we will make it work. Come and join us; if there’s interest, there’s instruments,” said Hemenway.

Hemenway can be found in the Pillsbury Music Center and encourages students who are interested in getting involved in Jewell’s musical opportunities to contact him at: hemenwayl@william.jewell.edu.