Last Sunday, Alexia Lamb, biology major and senior art minor, opened her senior art exhibit at William Jewell College titled “Senior Art Exhibit: A Mythical Past.” Lamb has always enjoyed art as a hobby and decided to pursue the minor to give her resume an eclectic look. However, she plans to have a career in biology. After she graduates in December, Lamb plans to take a year off to work as a lab assistant or a lab technician and then return to school for a master’s of science degree in toxicology.

“I am a third generation artist on my mother’s side, so I grew up doing art,” said Lamb. “I decided to take a minor in art because I enjoy doing it as a meditative therapy as well as using it to venerate my deities. However, the best thing that has come out of me doing an art minor here at Jewell is the expansion in mediums I have gained, and I hope to continue my proficiency in mediums like charcoal, pastel and oil paint.”

The the collection’s theme is Lamb’s religious practices that primarily draw from Hawaiian paganism. 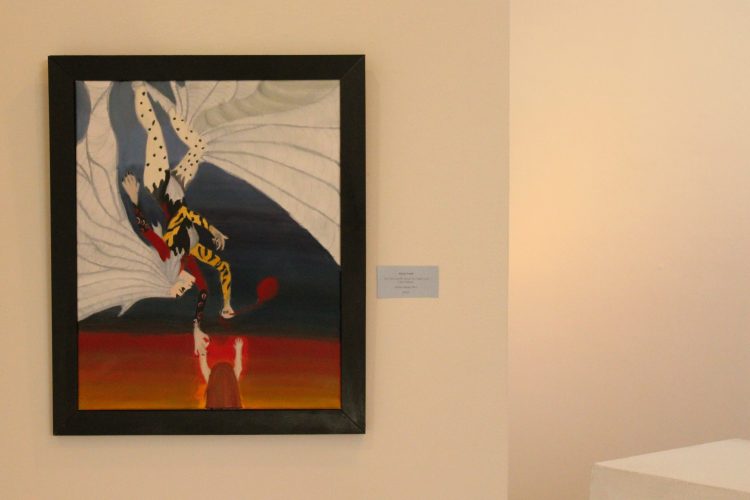 “I am highly inspired by the history of my religious path and how those mythos continue to influence us today,” said Lamb. “I wanted to bring forward a view that many students on this particular campus do not get exposed to.”

There is a total of 17 pieces on display at the exhibit. There is also a miniature version of a pagan altar, which includes a three-prong burn plate, candles corresponding to each of the four main gods that Lamb worships and an incense burner for Magnolia incense. The altar is displayed on top of an altar cloth.

Below is a brief description of the pieces displayed at the exhibit.

Dancing Lava (2017): Oil and Cray-pas on canvas. It is a tribute to the Hawaiian heritage of the Volcano Goddess Pele dancing in the lava flow on a full moon night. (Not For Sale)

The Past is in Our Head, the Future is in Our Children (2013): Oil on canvas.  The canvas represents the mythos of Arachne’s daughter, Lady of the Web, who descends to give a child back her balloon. This piece was inspired by the idea that people must look past their anger and intolerance to teach children not to fear what they may not understand and to teach love and tolerance. (SOLD)

Sea Serpent (2017): Oil on canvas. This looks back at the mythos of the mermaid, a temptress of the sea, taking a twist into the sea monster with a curving tail looping over itself capable of crushing strength but with a woman’s serene face as she arches back. It represents the line between what people expect from things they do not understand and how these things really are. (For sale: $250) 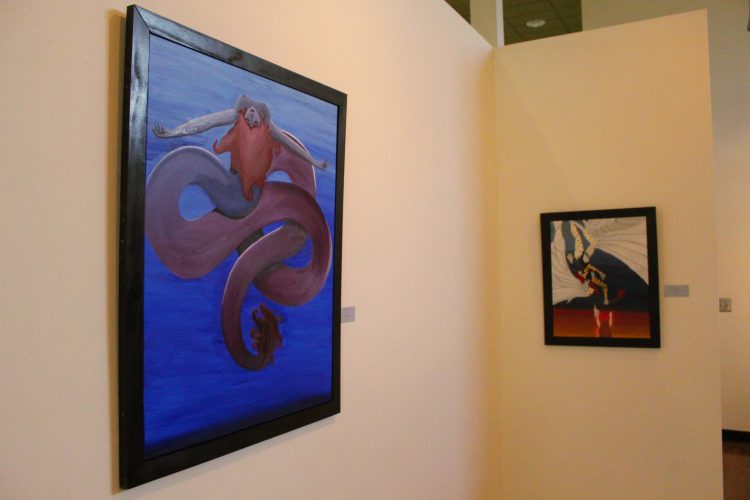 Clausves (2015): Pencil drawing. A demoness full of beauty and unyielding power stands unashamed of her horns, snake-like tail and bull legs. (For sale: $35)

Mokumokuren (2017): Acrylic on shoji. This is a tryptic piece. The far left is a depiction of a half-transformed Kitsune (part woman, part fox Yokai). Kitsune are revered for their magical prowess. The middle is full of various other Yokai (supernatural beings) in a golden miasma being summoned by the Kitsune. The far right shows a half cat, half woman called a Nekomata. Nekomatas are also known for their magical prowess and their brute strength. (There is a miniature version of this piece for sale at $175.) 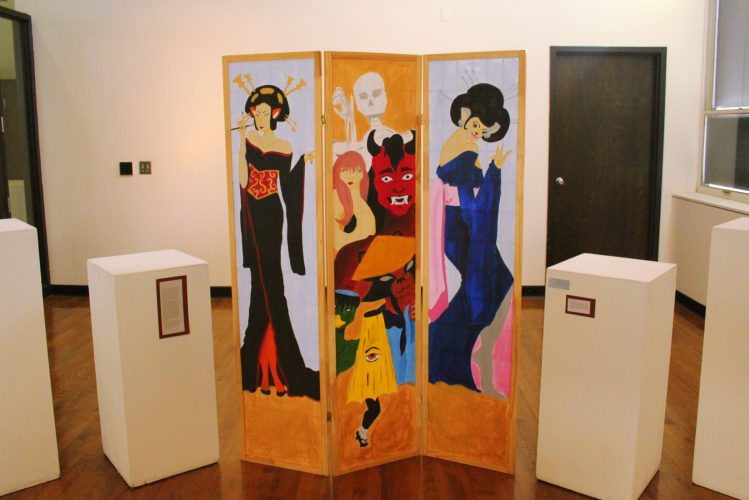 Union Stairs (2015): Silver gelatin print. This is an old-school black and white film photography print of the union stairs in Yates-Gill Student Union, a highly trafficked area by the student body and where Lamb often eats her lunch between classes. (For sale: $65)

My Sister’s Body (2017): Acrylic and modeling paste on canvas. This features a scene of the lava fields from the Volcano National Park in Hawaii. The Hawaiians believe that the very land is a manifestation of Pele’s body as she created the islands in the old mythos. In pagan practice, Pele is part of a four-god pantheon and acts in the sister role, hence the title. (For sale: $175)

Pahoiki Beach (2017): Silver gelatin print. This is a place not too far from Hilo on the Big Island of Hawaii that Lamb visited for the first time this past summer. Lamb thought the beach was beautiful with wonderfully warm swimming water. (For sale: $70)

Berries (2015): Silver gelatin print. This is a macro lens shot of strange frozen plants on campus. It was inspired by the idea of having a new look on something people would normally think of as insignificant. (For sale: $65)

Frozen Leaf (2015): Silver gelatin print. This is another macro lens photo of something people easily ignore on their day-to-day rush between classes. (For sale: $65) 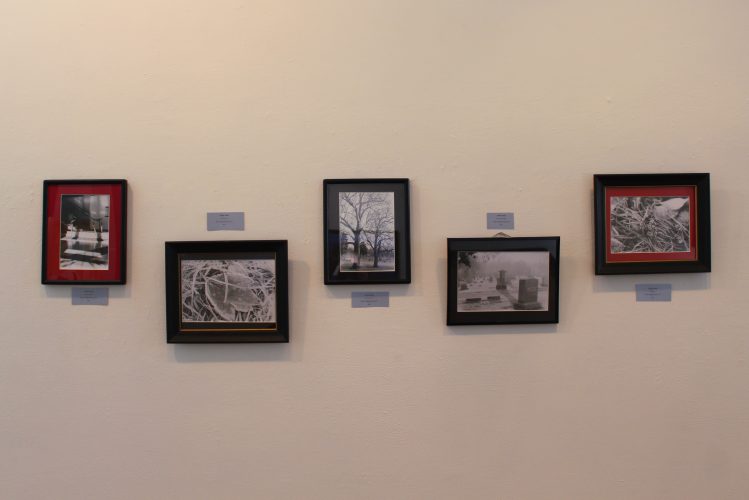 Pahoiki Waves (2017): Silver gelatin print. This shows a little beach not too far from Hilo, where the waves of the ocean crashed in to the surrounding rocks of the swimming area. (For sale: $70)

Kamohoali’i (2017): Watercolor. Sharks are greatly revered by many Hawaiians. In old days some Hawaiians would even “ride” them by holding onto their dorsal fins. The shark god Kamohoali’i is the brother of Pele. He is another god Lamb worships. He acts as a brother in the four-god pantheon. (For sale: $50)

Cernonnos (2015): Pencil drawing. Cernonnos is the Celtic horned god and often consort of the goddess known as the Morrigan, predominantly a nature god and often associated with the fertility holiday of Beltane. He is also a god Lamb worships and acts as a father-figure with the Morrigan as the mother figure. (For sale: $35)

Sweet Dreams (2014): Pencil drawing. Here, an angel nimbly balances on the back of a couch where Lamb watches over a sleeping nude woman. The angel’s posture and slight smirk are intentionally reminiscent of the mischievous fey painting of old. (For sale: $40)

My Gravestone (2015): Silver gelatin print. Here is a photo of the New Hope graveyard on an early winter morning where a gravestone displaying Lamb’s last name sits in the foreground, the deceased person has no relation to Lamb whatsoever. In pagan practice, death is not feared. It is simply a part of life and just another hitch in people’s path of reincarnation. (For sale: $60)

Hilo Beach (2017): Silver gelatin print. When Lamb went to Hawaii with her Journey Grant, she stayed in Hilo. In downtown Hilo, there is a place called Four-Mile Beach that Lamb found absolutely beautiful. It is also where she saw her very first sea turtle that was easily five feet in length. (For sale: $70) 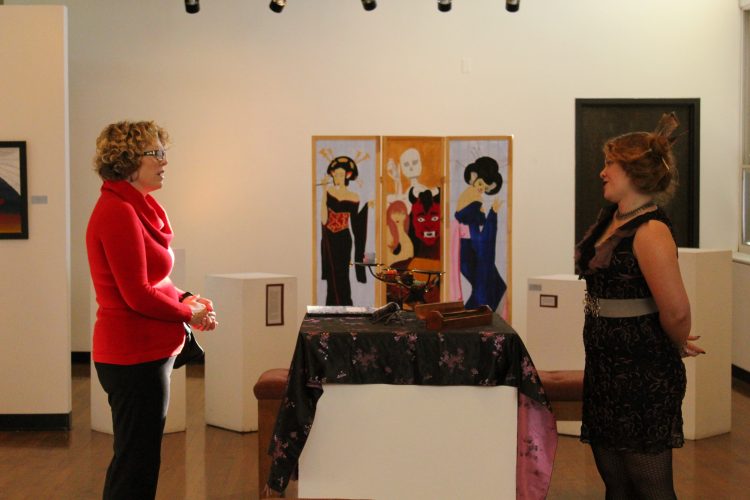 “My favorite pieces would definitely be Dancing Lava, Sea Serpent and Mokumokuren. I put a lot of work into these three pieces, and Sea Serpent actually has two other variations,” said Lamb.

The exhibit is open until Dec. 11 at Stocksdale Gallery on the top floor of Brown Hall.

Lamb also does commission work in charcoal, pastel, acrylic paint, oil paint, watercolor and pencil for a discussed fee. She can be contacted at lamba@william.jewell.edu or 816-665-1397.

PreviousPrevious post: Joe Biden in 2020
NextNext post:The newest wave of basketball talent from overseas might be the best