In a renewed effort to educate the William Jewell College community about how to respond to and prevent violence, Campus Safety partnered with the Liberty Police Department to host two Active Shooter Preparedness training sessions.

The sessions were hosted by Landon Jones, director of campus safety, and Officer Kyle Hamline in Yates-Gill College Union on Aug. 14 and Aug. 28. These drills come shortly ahead of a campus-wide lockdown drill scheduled for 11:15 a.m. Sept. 5.

The Hilltop Monitor reporters attended the latter of the two sessions. It began with an introduction from Jones, during which he urged students to be on the lookout for warning signs and report any suspicious activity.

“Tonight will be about responding to violence when faced with it, but more about preventing violence,” said Jones. “There are almost always warning signs […] people don’t just snap.”

“Everywhere you go in life there is evil, there is violence,” said Hamline. “The purpose of this workshop is instilling the mindset of preparedness.” 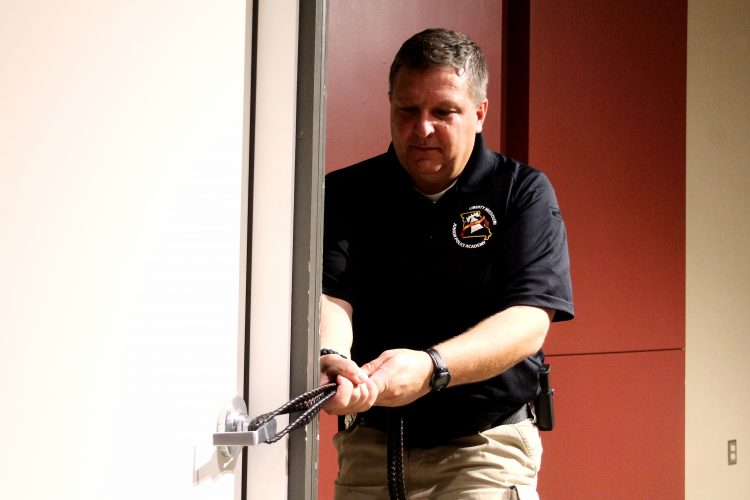 Officer Hamline demonstrates using a belt for leverage to ensure that a door cannot be pulled open from the outside.

Encouraging students to be more knowledgeable about this topic, Hamline urged students to familiarize themselves with secure locations on campus in which they could hide in the event of an active shooter.

“On the Hill the mindset is if not when, that’s why these chairs here aren’t filled,” Hamline said.

School shootings are nothing new in the United States, but with an average of more than one occurrence per week reported in 2018, training teachers and students to respond to the violence is becoming the norm.

In addition to training, governments across the nation have been taking action. According to an article released by the National Public Radio (NPR), at least 330 school safety bills were introduced to state legislators in 2018 and 53 of those have been signed into law to date.