Applause and shouts of joy exploded from mission control members Nov. 26 at the Jet Propulsion Laboratory in Pasadena, California. They were celebrating the payoff from years of work – the touchdown of InSight (Interior Exploration using Seismic Investigations, Geodesy and Heat Transport mission) on Martian soil after a seven-month long journey.

Tension amongst NASA directors and watchful members of the public can be attributed to the “seven minutes of terror” it took the lander to hit the ground after entering Mars’ atmosphere. 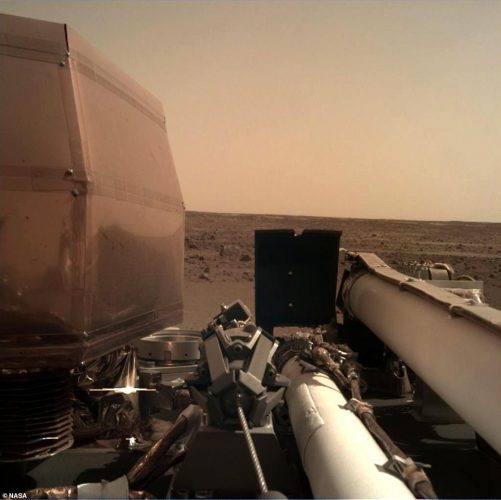 NASA’s latest interplanetary probe has sent its first selfie from the barren surface of Mars. The photograph shows part of the probe and the Martian surface in the distance.

Due to the millions of miles between Earth and Mars, scientists received all information about the probe’s wellbeing on a more than eight-minute delay.

Before InSight, NASA had successfully landed seven other crafts on the planet’s surface, but InSight is the first dedicated to studying what lies beneath.

According to NASA, “the InSight mission seeks to uncover how a rocky body forms and evolves to become a planet by investigating the interior structure and composition of Mars. The mission will also determine the rate of Martian tectonic activity and meteorite impacts.”

NASA has described the mission as a checkup of the red planet’s pulse and temperature over the next two years. Among InSight’s instruments are a seismometer and heat flow probe. 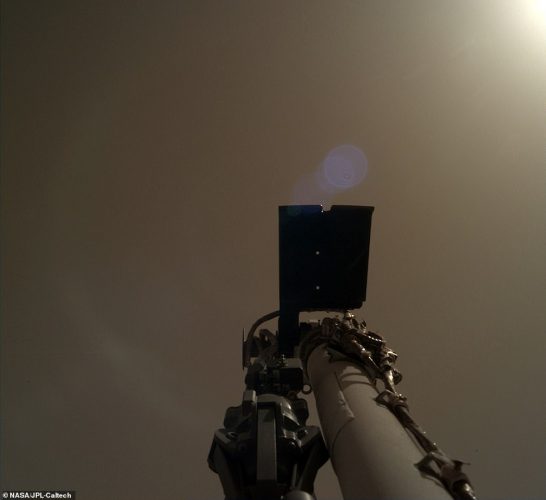 InSight has so far shared a handful of grainy images using its lander-mounted, Instrument Context Camera (ICC) and the Instrument Deployment Camera (IDC) on its robotic arm (shown). The latest show the area directly in front of it, along with a look at some of its instruments.

“Studying seismic waves tells us what might be creating the waves,” NASA said. “On Mars, scientists suspect that the culprits may be marsquakes, or meteorites striking the surface.

The heat flow probe will drill deeper than the space organization has been able to reach before.

“Its observations will shed light on whether Earth and Mars are made of the same stuff, and provide a sneak peek into how the planet evolved,” said the mission overview.

While the majority of missions do not survive space travel and impact, InSight hit its target – Elysium Planitia lava plane, which is described as a “vast, flat, almost featureless plain near the equator.”

Because InSight was designed to remain stationary while examining Mars’ crust, mantle and core, a proper landing was critical to the success of the rest of the mission.

“Now they’ve determined that the vehicle sits slightly tilted (about 4 degrees) in a shallow dust- and sand-filled impact crater known as a ‘hollow,’” reported phys.org. “InSight has been engineered to operate on a surface with an inclination up to 15 degrees.”

Since its arrival Nov. 26, InSight has been busy sending back the first grainy photo of its landing site, discharging its robotic arm and setting an off-world record for solar power production. 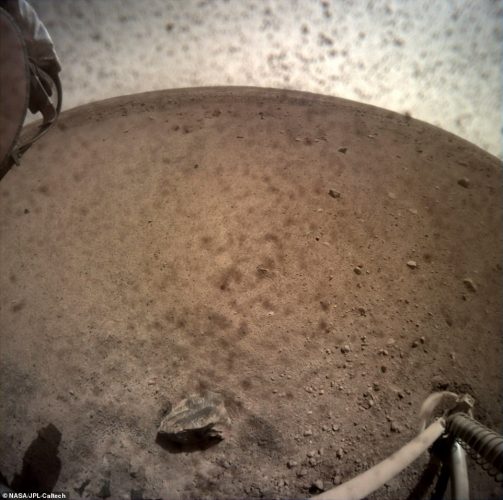 NASA’s InSight lander is now settling into its new home on Mars and sending pictures back to Earth all the while. The latest snapshots show our clearest look yet at the site where the new lander has planted its feet.

InSight’s safe landing is not the only thing NASA has to be proud of. When the probe launched May 5, 2018, it did not leave the Earth without company. Two smaller CubeSats nicknamed Wall-E and Eve followed InSight so scientists could test whether the relay technology could survive such a far journey.

“The CubeSats provided information to InSight’s landing team in just 8 minutes – the time it took for radio signals to travel from Mars to Earth,” according to the Jet Propulsion Laboratory. “That was much faster than waiting on NASA’s Mars orbiters, which weren’t positioned to be able to observe the entire event and send data back to Earth immediately.”

“InSight will use two main instruments: a dome-shape package containing seismometers and a heat probe that is to burrow about 16 feet down,” the New York Times reported. “France and Germany invested $180 million to build these main instruments.”