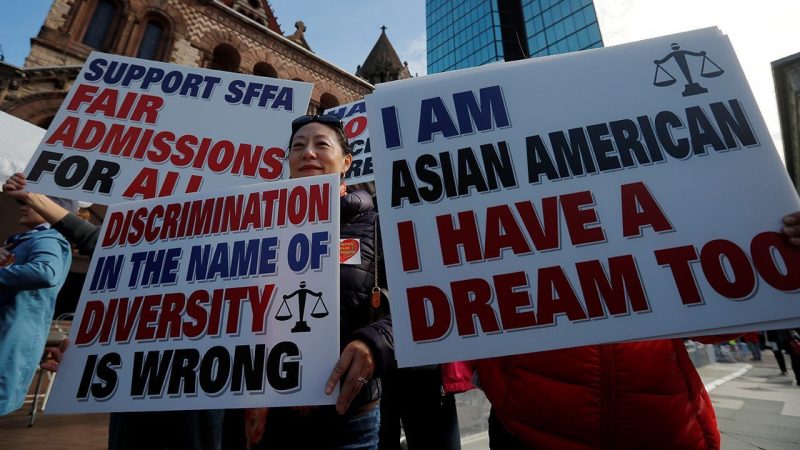 Supporters attend the “Rally for the American Dream – Equal Education Rights for All,” ahead of the start of the trial in a lawsuit accusing Harvard University of discriminating against Asian-American applicants, in Boston, Massachusetts, U.S., Oct.14, 2018.

The lights are dimmed and the stage is set for a showdown between Harvard University and an anti-affirmative action group, Students for Fair Admissions (SFFA). One of America’s premier universities stands accused by the nonprofit for discriminating in its admissions practices by implementing a quota system that limits the number of Asian-American students it accepts.

As part of Harvard’s “holistic” approach to admissions, the college considers individual characteristics alongside grades and test scores. While Asian-Americans are statistically stronger in extracurricular participation and academic achievement, SFFA attributes their lower personal ratings to racial bias.

According to The New York Times, what separates this particular case from several past challenges to affirmative action is that it “argues that a minority group has been unfairly penalized in favor both of whites and of other minority groups.”

Both sides of the admissions case are primed for an advance to the Supreme Court in coming years, but for now, all eyes are on Boston federal district court judge Allison Burroughs. An Obama era appointee, Burroughs was one of the federal judges who moved to block Trump’s travel ban in 2017. She has been tasked with sorting through the evidence of the three-week case and presenting a decision that will undoubtedly form the framework for future appeals

Additionally, Burroughs’ ruling, which is unlikely to be handed down until the spring, may have an impact on the autonomy of private universities.

“Unlike previous such legal challenges that focused on public colleges, this one contests the independence of a private institution to set its own mission and standards for admissions,” stated an article from The Boston Globe.

Proposed solutions to bias in admissions do not have to eradicate affirmative action entirely. Previous cases have resulted in refinement of the policy, trimming some controversial parts while still protecting the concept.

“Burroughs could suggest remedies, such as more training for admissions officers or tweaks to the process that would address any potential bias,” The Globe reported.

The Harvard trial may raise new questions about affirmative action, but several past trials still function as precedent. In a monumental 1978 Supreme Court case, Allan Bakke, a medical school applicant, sued the University of California for giving minority applicants preference.

According to the National Constitution Center, “the court decided the University of California had to admit Bakke, arguing the rigid use of racial quotas at the school violated the Equal Protection Clause of the 14th Amendment. But the court also found that race as part of admissions decisions was constitutional, as long as it was one of several admission criteria.”

It is possible that the Supreme Court will choose to not hear the case since they ruled on affirmative action as recently as 2016. The court examined University of Texas Austin’s policy and decided in a “4-3 [decision] that colleges could use race as one factor in considering applicants and creating a diverse student body.”

However, court dynamics have changed as a result of Trump’s appointments of Neil Gorsuch and Brett Kavanaugh. As the restriction or complete abolishment of affirmative action is generally considered a conservative cause, current conditions may lead the court to hear the case and potentially rule against affirmative action.

Though the Harvard case may be the most publicized attack on affirmative action at this time, Asian-American advocacy groups have also filed claims against the California university system and University of North Carolina Chapel Hill. In addition, Yale University is subject to investigation by the Justice Department on similar grounds of discrimination.

Support for affirmative action is not divided along purely racial lines. While many Asian-Americans feel disadvantaged by schools’ efforts to create diverse student bodies, others feel they are being used as a tool for white supremacy.

“Surveys show that by and large, Asian-Americans support affirmative action,” said The New York Times. “Many have fiercely defended Harvard in the lawsuit, and say that the plaintiffs are using them against other minorities.”

Some question the relevancy of this case considering that Asian-Americans comprise a much larger percentage of Harvard students than of the United States’ population – 5.6 percent.

“At Harvard, the percentage of Asian-American students admitted has been steadily increasing, and for the most recently admitted class of 2022 reached about 23%,” reported by CNN. “African-Americans were at about 15% and Latino at 12%. A category of mainly white students accounts for 50%.”

Harvard’s diversity would be adversely affected if the case resulted in the removal of race as a factor in its admissions. But the FFSA argues that Harvard’s desire for diversity is racial molding and does not justify limiting the interests of any individual.