Eight kilometers is approximately 4.97 miles. That is around 10 thousand steps for a typical human being. At a speed of around four mph, it would take the average human around an hour and 15 minutes to walk this distance.

The men’s cross country team run this distance in every race they compete in. The women’s team complete 6 kilometer races. Both teams train year round, putting in miles to improve their speed and endurance.

In the spring, the athletes compete in track and field, competing in many events including the steeplechase, the 1,600 m and more. Denver Strong, senior mathematics and physics major, as well as cross country runner, said that running keeps him sane.

“It’s been shown that just running, or doing exercise in general is good for your mental health,” Strong said. “I think I keep running because of that.”

Strong sees cross country as a way for his brain to take a break. When he’s running, he doesn’t think, and for him it is a relief from the everyday stress of college life. 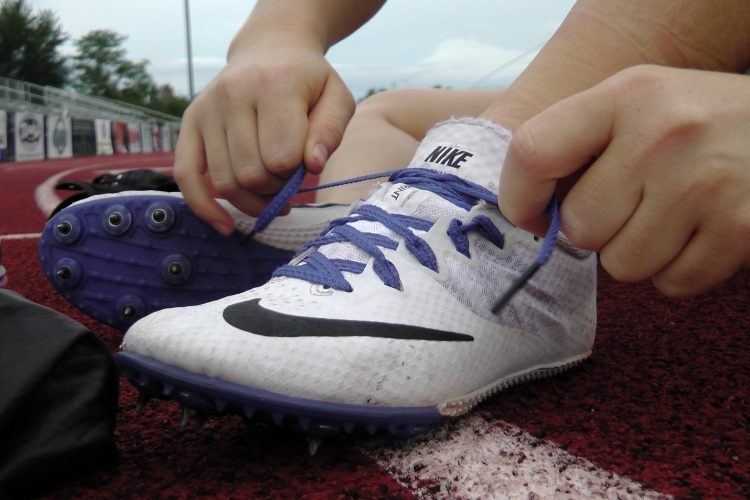 For runners, the right footwear can be the difference between a good and a bad race.

Alexis Mijares, junior biology and Spanish major and cross country runner, loves being outside. She said that running outside is comparable to worship for her, bringing her closer to God’s creation. She also feels a strong bond with her teammates, seeing them as a source of support and relief in her college years.

“I think it’s probably different than a lot of other sports, with the nature of running,” Mijares said. “On the easier [runs] we get to hear about each others days and what’s going on in everyone’s lives and on the harder ones we have the opportunity to push each other and help each other.“

This year, Mijares and Strong are excited for the season, but worry about how the new change in coaches will affect the training and overall moral of the team.

Since Strong was recruited, he has had four different coaches. Each coach has a different training style and different expectations for how they want a team to succeed. Strong noted that the team itself has talent. He noted that the first year recruit is faster than him and sees this as a plus. But any team needs a coach and with changes nearly every year building a strong team has proven difficult.

“When you don’t have a consistent coach, your training isn’t going to be as good in general,” Strong said. “You go from one workout a week, to two or three workouts a week and back to one. You’re just not going to get as good of results. And I think people not getting results just leaves them with less faith in the team.”

Mijares also mentioned that the injuries plaguing the team provide another obstacle during the season. Mackenna Fulton, first year nonprofit leadership major and runner, is currently healing from shin splints while junior runner and elementary education major Brittany Marr rolled her ankle in the first meet. Injuries hurt morale, but the talent is similar all across the team so the injuries should not prove detrimental to the overall performance.

Strong and Mijares both hope that with the new athletic director and a new coach, this season will provide the much needed consistency. They have already completed their first meet, and the next is Sept. 15 at Missouri Southern State University.

“Jewell’s cross country team was good at one point,” Strong said. “Once we get the consistency and we start getting results again, we’ll be pretty solid.”

Photos originally published in a photo feature by Danielle Regnier.