William Jewell College is now the school of champions. On March 22, seniors Katelyn Johnson and David Hansen, communication majors, won the 2016 National Parliamentary Debate Association (NPDA) championship tournament with a 7-0 decision in the final round.

“I was definitely nervous right before the final round,” said Johnson. “I was nervous right until they announced who won the round, to be honest. I felt good about the round but it’s still nerve-racking waiting for a couple hours to figure out whether or not you won your last debate round ever.”

The tournament, held at California State University at Long Beach, hosted over 170 teams competing for the title. Hansen and Johnson competed against Southern Illinois University (SIU) in the final round, the school with the 2014 winning team.

“I felt confident going into the final round,” said Hansen. “The team we were debating was very good – they were from the same school that won the tournament in 2014 – but we knew how to beat them. We had an argument that was smart and that we were well prepared and practiced on. We predicted what they would say and we knew how to answer it.”

The duo’s performance in the final round received praise from Dr. Todd Graham, director of debate at SIU, who agreed with the results.

“We got beat by a better team today,” said Graham. “William Jewell deserved to win the national championship, because they were the best team.” 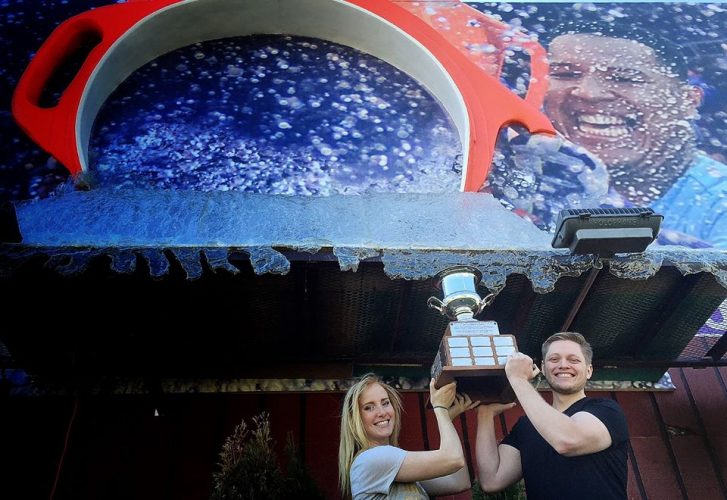 Johnson and Hansen were known to have the potential to win this title, having finished ninth as a duo in the same tournament when they were sophomores and having individual successes throughout their junior year. With this being their senior year and last chance, there was the added pressure to achieve the highest award.

“This is something we had worked towards for years,” said Hansen. “[As a senior], any debate could be your last, so you can’t let that thought take hold of you in a round and make you choke. We spent so much time researching arguments, watching debates and practicing speeches that winning became that much more sweet.”

Another reason winning was so sweet was because, according to director of debate, Kyle Dennis, Jewell is the smallest school by far to take home the trophy.

“We don’t have divisions in debate,” said Dennis. “We debate, and can win, against schools like the University of Oregon, which is a top, Research I academic institution.”

Dennis pointed out that these schools are not only academically accomplished and well-known, but have huge student populations from which to draw their best two-person team and receive more scholarships and funding than the Jewell debate team. These factors make Johnson and Hansen’s national championship win even more impressive.

“Personally, I think the win proved to myself that I could achieve anything as long as I put my mind to it,” said Johnson. “I wasn’t very good at debate when I first started out so coming all that way just exemplified what hard work can do. I also think that the win will be beneficial for the team and for the school. I think this will prove to our younger students on the team that winning nationals is something that any one of them can do. It sort of broke the myth that winning nationals is impossible.”

Hansen and Dennis agreed that much of their success came because of the support of teammates and the College.

“We had debaters watching rounds, researching positions and supporting us the whole way through. Their help was indispensable,” said Hansen. “Also, we couldn’t have won without the College. Jewell’s rigorous courses, achieving student body and brilliant professors gave us the critical thinking skills needed to win. It’s a testament that Jewell’s investment in students creates results. I hope our win encourages the college to keep supporting extra-curricular academics.”

Watch the winning final round at http://youtu.be/GSPomzFMaTo, starting at the 28-minute mark.