Share
Homecoming Week is a long-standing tradition at William Jewell College. The week-long series of events invokes Jewell spirit as the students compete for the spirit stick each night and a trophy at the end of the week. Points are awarded based on participation throughout the week.

The student body is divided into groups who compete against each other to earn points and win the spirit stick. The independent students and first-years participate as their own groups, and greek organizations are paired together. The sorority-fraternity pairings are switched each year. This year’s teams are Delta Zeta and Phi Gamma Delta, Alpha Delta Pi and Lambda Chi Alpha, and Alpha Gamma Delta and Kappa Alpha. The women of Zeta Tau Alpha are competing solo this year.

The theme for this year is Jewell Goes Platinum. Each group was assigned a decade ranging from the 50s to the early 2000s. These themes are carried out through the groups flag designs, attire and song choices.

The week began Saturday Oct. 1 with Serve and Celebrate. Students were divided into smaller groups and were dispersed among the Liberty and Kansas City area. One group stayed on campus and helped facilities place mulch around Shoemaker Hall. Another group volunteered at Englewood Gardens in Kansas City.

“Sam Buhlig’s dad helps run it. We got to do general farming upkeep. Some of us spread soil on a field that they are about to plant wheat in. Some people got to harvest peas. Others got to tend the chicken coops,” said senior political science, history and applied critical thought and inquiry major Ezra Begemann.

No events were held on Sunday. 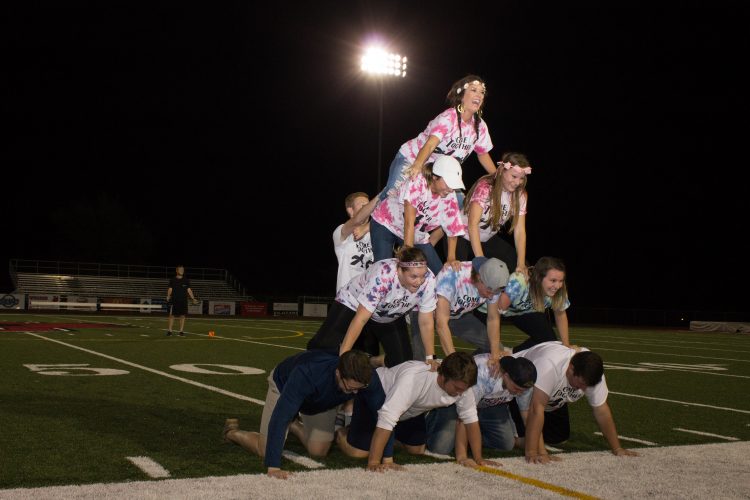 “The Homecoming Committee made the change to the frozen T-shirt contest and hula hoop relay to still have the team elements, but also to have something fresh and new while still holding the tradition with most of the games. This year was really a trial run for those new games, but they seem to have been well received,” said junior biology and psychology major and Homecoming Committee co-director Riley Adelmund.

Tuesday night was Carnival Night. Games were set up that allowed students to win raffle tickets that could be entered into three different raffles: a Jewell apparel basket, a movie basket and a candy basket. Students dressed in the attire that corresponded to their decade.

“I dressed up in a jean skirt with a really disgusting tank top and a scarf tied around my waist as a belt. I looked like Ashley Tisdale from the Nickelodeon Orange Carpet,” said junior nursing major Elaine Barella whose decade is the early 2000s.

Students received Wednesday night off, but points were still awarded for the day. Group photos were taken after Chapel. Participation points were awarded based on the number of people who showed up.

Campus sing took place on Thursday night. During campus sing, each group performs a dance to songs that they have rewritten the lyrics to and made relevant to Jewell. Campus sing also saw a new addition this year. In between performances, the Homecoming Committee hosted Minute to Win it games.

“I had a tissue box full of ping pong balls tied around my waist and I had to shake my butt so they would all fall out,” said senior English and political science major Brett Stone. 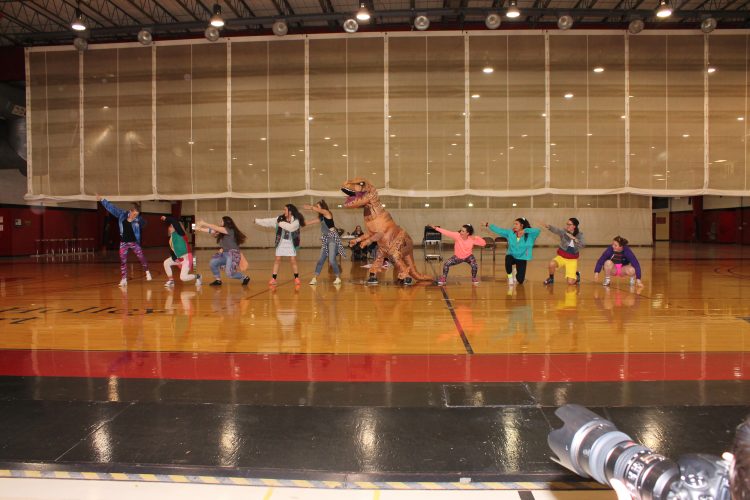 In prior years, a pep rally has been held on the Friday of Homecoming week. The Homecoming Committee decided to combine this event with Campus Sing. Instead, games and food will be on the Quad Oct. 7 during Jewell Time.

The festivities culminate with the football game Oct. 8 where the king and queen will be crowned and the winning group will be announced. Candidates up for queen are Allie Harbaugh, Molly Ingram, Rayna Downing, Morgan Hayter and Larissa Dougherty. Up for king is Staton Rebeck, Trevor Nicks, Ben Shinogle and Brian Kongs. The students will be introduced during halftime Saturday Oct. 8 as the Cards take on Quincy University.

All photos taken by Elizabeth Messina.