Some individuals can trace the moment they realized what they wanted to do for the rest of their lives. For William Jewell College art professor Nano Nore, this moment occurred when she was 17. Nore had spent the summer between her junior and senior years of high school attending an art camp at the University of Kansas. There, she was able to advance her studies in sculpture and drawing and discovered a deep interest in art history.

“Towards the end of the [art history] class, the teacher started showing impressionism and post-impressionism, which I was familiar with. But this art historian had gone on and on about how this [painting] is at the Musée d’Orsay, and this one’s in the Louvre and this one’s in New York. I kept thinking, ‘Someday I’ll go to New York, someday I’ll go to France and I’ll get to see these things,’” Nore said.

At the conclusion of her six weeks on the University of Kansas campus, Nore traveled with a friend to Chicago with plans to visit the Art Institute of Chicago. As she walked through the galleries Nore happened into the room that displayed “Sunday Afternoon on the Island of La Grande Jatte” by Georges Seurat, a post-impressionist painter. Nore turned around to see Toulouse-Latrec’s “At the Moulin Rouge” and Van Gogh’s “Bedroom at Arles.” She was so emotionally overwhelmed with actually seeing the paintings that she had learned about in class that she worried the museum guards would think she was on drugs.

“And when I saw these things I was overcome by emotion, and I sat down and started crying. I would spin around and I’d look at the other one and start crying again. I kept twirling, I was having an epiphany of a major size about how art had the capacity to change life, to change people. I learned what an aesthetic experience was and how it’s more than just mental, it is body, soul and spirit,” said Nore. 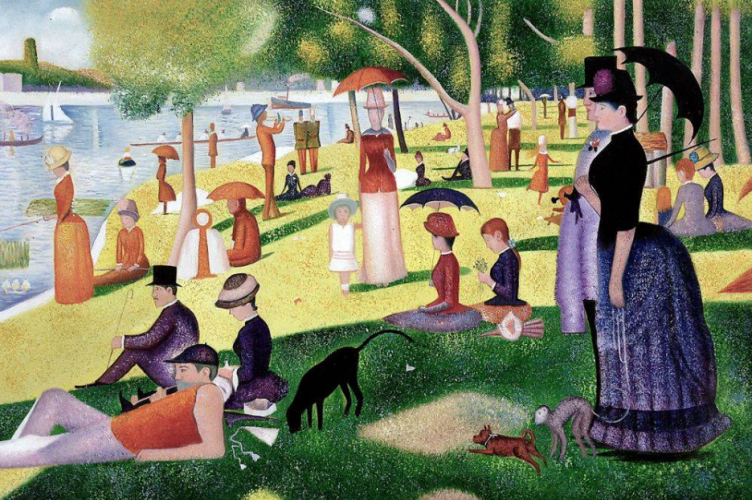 It was this epiphany that sparked in Nore the decision to become an artist. Upon graduating high school in 1970, Nore traveled from her small Nebraska hometown to Kansas City to attend the Kansas City Art Institute (KCAI). She decided to major in painting and printmaking while also taking art history and ceramics classes. Nore completed her undergraduate degrees in 1974, but eventually went back to school to receive her masters in ceramic sculpture and a masters of fine art in ceramics and art history from Texas Woman’s University.

While attending KCAI, Nore was able to complete the required number of hours to teach grades K-12. She taught at inner city schools in Kansas City, Mo. before becoming a faculty member at Park University. Nore became the chair of the department and remained at Park for three years. During that time, she had her son Joel and decided with her husband to move to England for a year in order for him to take advantage of a career opportunity. 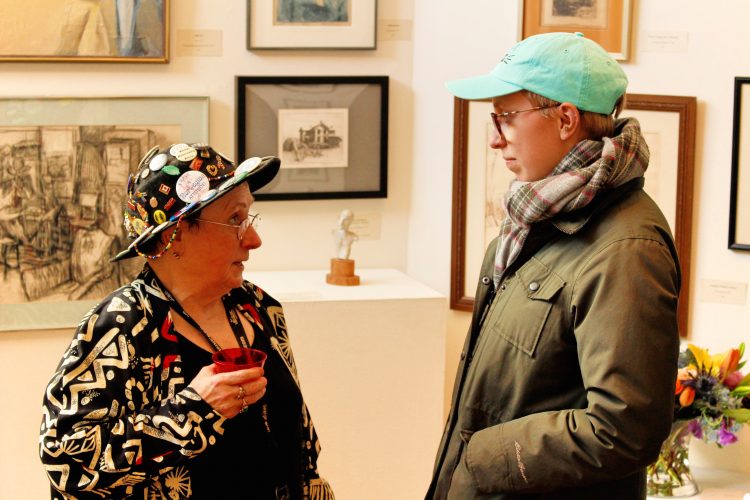 “While I was [in England], I got to travel and see all the art history all across Great Britain,” Nore said. “I took slides and ending up with just thousands of slides that I brought back and used [in the classes I taught] all the way up to the point where I switched to digital.”

These slides can be seen in the piece “Adieu Art History” currently on display in the Stocksdale Gallery.

Upon arriving back in the U.S., Nore learned of an opening in the art department at William Jewell College. The department was looking for a candidate to teach painting, printmaking and art history and to run the Stocksdale Gallery. Nore remembers having a vivid dream of brick buildings on a hill and meeting someone that reminded her of her father. When Nore arrived on campus soon afterwards, she realized that the buildings matched those in her dream and that the older gentleman she had spoken with was actually Donald Johnson, then chair of the art department. Nore was offered the job later that day and has been a faculty member for 30 years.

Nore knew from very early in her life that she wanted to become a teacher. 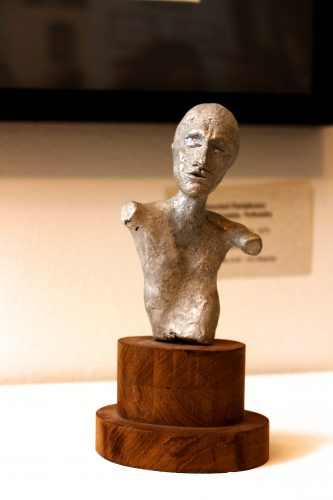 “When I was a sophomore my dad had a conversation [with me], a come-to-Jesus moment, where he asked me ‘What are you going to do when you get out of school?’ and I said back ‘teaching,’” Nore said. “But KCAI didn’t offer teaching credits and within a month of making that decision, KCAI teamed up with Park University so that KCAI kids could take their education hours and student-teaching through Park.”

Nore remains very grateful and humble that she has been able to pursue the passions she had when she was younger. She believes that it is extremely rare for someone to know what they want to do and be able to do that as a career. For Nore, the students that she has worked with have made her decision to teach completely worthwhile. Nore recounts that the art history minor she created has propelled students to graduate studies in art history and how teaching students to mat and frame their own work has led them to careers in galleries.

“It’s extremely rare that something you loved to do back when you were 19 years old can be what your vocation has been now that you’re 66,” Nore said. “It’s really an amazing thing.”

Nore has known that despite her passion to teach that she would forever continue to create art. She has called herself a “teaching artist” who regularly works on her own artistic projects while also being a full-time faculty member.

Nore’s retrospective show “Nano Nore: 5 ½ Decades of Art” is currently open in the Stocksdale Gallery on the top floor of Brown Hall. It chronicles Nore’s artistic life from sixth grade to the present. Drawings and paintings from Nore’s years in high school and college flow into different series from parts of her life, including multiple trips to Norway and three series of woodcut prints. Displayed at the center of the prints is the piece Nore created to celebrate the inauguration of Jewell’s President Dr. Elizabeth MacLeod-Walls. 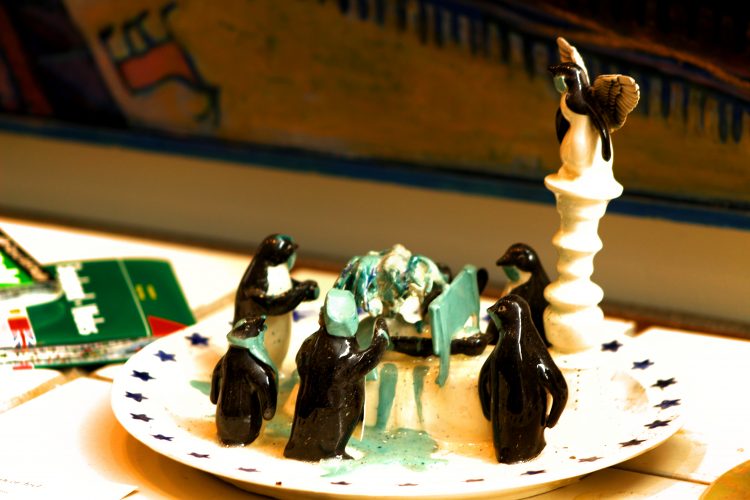 The show displays a range of media including printmaking, oil paint, sculpture and watercolor, as well as a wide variety of styles. Nore is not afraid to confront difficult themes. Many of her pieces reflect upon her religion, her divorce and self-realization. One section of the show features “imagined roads,” which Nore stated equated to her searching for a path and understanding the road she has walked during her life.

“Enclosed Garden” is a large installation piece in the center of the gallery. Nore first created this piece in 1995 and has rebuilt it for her retrospective.

“[The piece] is a story about the hero’s journey,” Nore said. “It follows the quest, the idea that you find yourself in a new place and your eyes have been opened enough that you know you’re not going to live the status quo any longer.”

The piece itself has four stages that describe how the self goes through trial and despair, and is ultimately destroyed, in order to be resurrected again. The ruby slippers that are a part of the piece represent how one can represent the transformation that has occurred. The center of the installation is a pedestal with a ceramic piece mounted on the top. 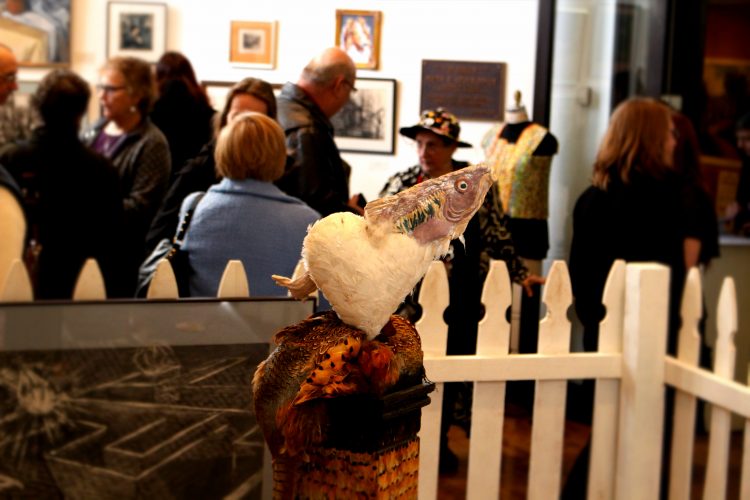 “You travel up through the pedestal, with peacock feathers representing eternity and you see the heart covered in feathers,” said Nore. “I ran a sculpted fish through the middle of it. ‘Ichthus’ is Jesus Christ, God, Son, Savior, is the shape of the fish. I really saw that the heart would be pierced through by the Christ principle for me.”

The artwork in the retrospective continues in the drawing and painting room at the bottom of Brown Hall.

Nore will be retiring this year at the age of 66, having spent the last three decades as a member of the art department. She has been invited by a former student to travel to Italy in June. Nore hopes to continue her world travels and making art well through her retirement.

The end of the art department at WJC was an unexpected event for Nore, especially as it happened to coincide with her retirement. She hopes that there will eventually be art courses offered again and for the Stocksdale Gallery to continue to be used by the community in the years ahead.

Jesse is a senior chemistry and studio art major and the Lifestyle Editor for the Hilltop Monitor.