Students may have noticed a distinct change in the desserts both in the cafeteria and the coffee shops on the campus of William Jewell College. The pastries and other goodies are much different from the baked goods of last semester, and we have Robyn Miller to thank.

“The biggest change to the coffee shop items has already been made at the beginning of the semester; all baked goods have been switched to scratch-made items,” said Miller.

Miller has already integrated her scratch-made baked goods into the displays at @theBeak, with muffins ranging from the classic blueberry to a refreshingly new lemon raspberry. Previously, these baked goods were pre-made and only needed to be baked before being ready for purchase.

Shelby Anderson, junior elementary education major, has had the opportunity to sample some of the new desserts.

“I had a quality brownie during Jewell time. It was really warm and gooey, like all brownies should be. I think I advertised it to everyone, it was that good,” said Anderson.

In the cafeteria, students may have seen and tried some of the new desserts made by Miller.

“What you can see in the cafeteria will be the move to all scratch-made items. I am slowly moving through the stock of mixes and pre-made items that we have on hand. Even now the majority of items that you are seeing are scratch-made or items that I have enhanced in some way,” said Miller.

“This semester the desserts seem fresher, which is a nice change. It also looks like they’re trying new things,” said Anderson. 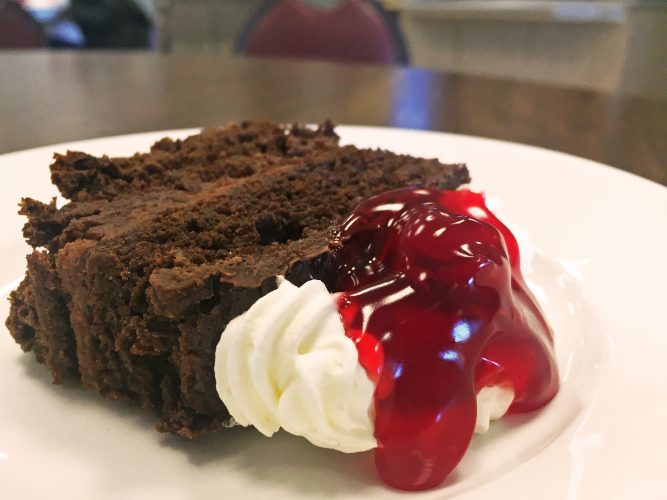 Miller has been baking from a young age with her grandmother, who helped guide her passion for pastries and baked goods.

“[My grandmother] knew that there has to be the balance in baking that you don’t have to use when cooking. Because of her, I always enjoyed baking more than cooking so whenever I was needing to take food to an event I would make bread or desserts,” said Miller.

Before coming to Jewell, Miller was a personal chef for a couple, worked at Latteland, which was later taken over by Khaldi’s, and worked in retail. She graduated December 2011 with her culinary degree, specializing in baking and pastries.

“Up until eight years ago, I was a retail store manager and wasn’t happy doing it. After a string of events, I decided that it was time to make a career change, so I had the opportunity to attend culinary school and I took it,” said Miller.

Miller has also thought about the future of baked goods on campus and what she would like to make for students, specifically looking at a made-from-scratch granola bar.

“I’m always looking for new items to try and see how they are received. If they go over well then that will make a return, and others may never show up again. My feelings are never hurt if someone doesn’t like it; we all have different tastes and what we enjoy. I only hope to learn more of what people like and look forward to seeing on the table,” said Miller.

Students should remember that there is a box available for comments at the entrance of the cafeteria if they would like to leave suggestions for Miller.

Miller spoke about the source of inspiration for her baked goods.

“My inspiration comes from your classic home, feel-good desserts and also your high end classics. I’m always willing to listen to suggestions and looking for things that are new and different. Mostly I just love making food that people enjoy eating. My son always tells me I don’t make food that people have to have which is completely true. I want to make food people are willing to feel a little guilty for eating. I want it to be hard for you to pass by the table and not take one of something,” said Miller.