On Feb. 12, an attentive crowd gathered to witness the unveiling of Barack and Michelle Obama’s new portraits. The event was held at the National Portrait Gallery which is a part of the Smithsonian Museum system.

Kehinde Wiley, the painter of Barack Obama’s portrait, is based in New York City. Wiley is best known for his portraits of Michael Jackson as King Philip II and Ice T as Napoleon.

Wiley features the former president seated in a chair leaning forward and surrounded by greenery and flowers.

President Obama’s choice to use Wiley as his painter was in part due to the shared experiences the men have. After the unveiling, Obama spoke about how he and Wiley were both raised by American mothers and had absent African fathers.

Amy Sherald, the artist who depicted Michelle Obama, is a black woman based in Baltimore. Sherald’s most famous accomplishment prior to this portrait was the fact that she won the National Portrait Gallery Outwin Boochever Portrait Competition in 2016. The portrait of Michelle Obama is regarded as Sherald’s “big break.”

“She came in and she looked at Barack and she said, ‘Well, Mr. President, I’m really excited to be here and I know I’m being considered for both portraits, but Mrs. Obama,’ – she physically turned to me, and she said, ‘I’m really hoping that you and I can work together,’” said the former first lady in reference to choosing Sherald.

Sherald’s eagerness to paint Obama contributed to her being chosen as the artist. Sherald says that she is relieved she was chosen because now she can pay back her student loans.

The significance of these portraits is that Wiley and Sherald are the first African Americans to paint official portraits of the first couple for the National Portrait Gallery.

Sherald described her portrait of Michelle Obama as “an archetype that a lot of women can relate to — no matter shape, size, race or color. We see our best selves in her.” 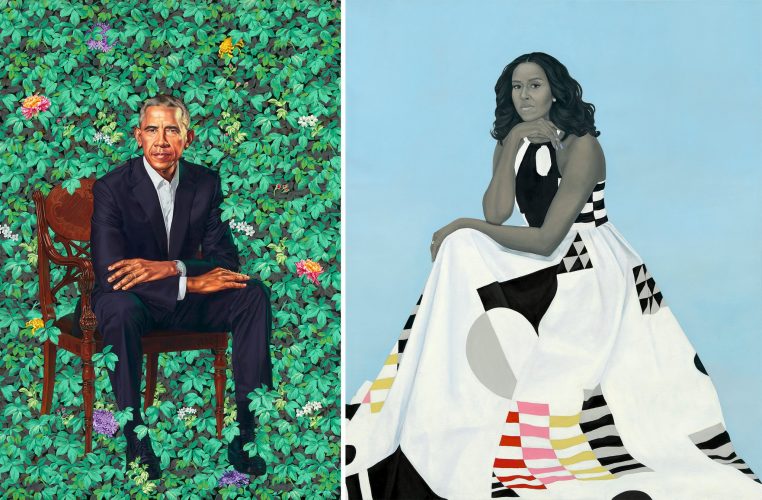 Photos of portraits courtesy of The New York Times.

Critics questioned why, in Michelle Obama’s portrait, her skin color was painted gray. This stylistic decision actually aligns with Sherald’s other works, which are painted primarily in grayscale.

“Gray makes the paintings work. But it’s also a way for me to subversively comment about race without feeling as though I’m excluding the viewer,” Sherald said.

President Obama’s portrait is also unconventional as it shows him seated around greenery, unlike any other presidential portrait.

Wiley’s artistic approach often centers around a naturalistic interpretation to show how African American males are represented in culture.

“[It] challenges our conventional views of power and privilege,” Obama said.

Positive critics agree that the portraits portray, “intelligence, directness, and — perhaps more than anything else — cool.”

These portraits provide a fresh air of creativity and inspiration. They show the Obamas’ willingness to take risks and present themselves in an artistic fashion. The portraits also show that art can be used to convey important messages. Michelle Obama hopes that these portraits will be inspirational.

“Young people, particularly girls and girls of color, in future years they will come to this place and see someone who looks like them hanging on the walls of this incredible institution,” she said.