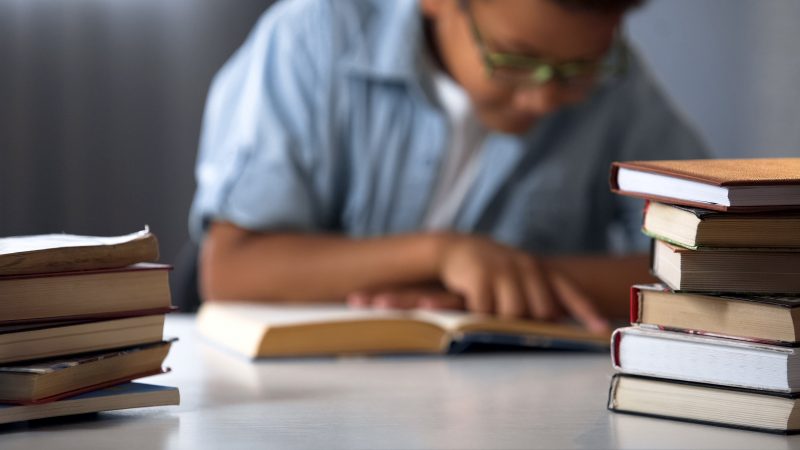 Piles of books on pupil’s table.

The founding fathers conceptualized a nation free from oppression and open to expression, yet the institutions tasked with cultivating the youth are given the capability to ravage core American values.

Every student ponders their obligation to school. Isn’t it hypocritical that we are raised under principles of freedom only to have that idea suppressed for the first 18 years of life? But decade after decade, swaths of children neglect the answer and endure 12 years of government mandated schooling. I am predisposed to the same logic and I finally want to dispel the common beliefs.

The institution of schooling is rooted in fascism.

Merriam-Webster defines fascism as “a tendency toward or actual exercise of strong autocratic or dictatorial control.”

Don’t get me wrong, school is useful for basic intellectual training but its permissible practices can be justly interpreted as fascism. The movie “Dead Poets Society” demonstrates this perfectly. Set at an all-boys school meant to foster the best and the brightest, life most closely resembles boot camp rather than identity through knowledge. The central theme of advocating civil disobedience in a culture groomed to detest it applies to much more than the humanities as movie outlines.

The entire philosophy of the school in the movie was rooted in fascist ideology. Administration stressed conformity, suppression and discipline. Those that act outside of the acceptable behaviors were swiftly and forcefully punished.

This is a fictional work of cinema but the fact that it is based in realism and pragmatism is what’s most scary. Schools hold the ability to teach students in the exact same manner as what is depicted in the movie and it exists well within their purpose and boundaries. What most reinforces how the mindset behind schooling is fascist is how the school in the movie never betrayed its primary duty to the students which is delivering education.

The search for pupil identity was a forfeited endeavor. It was to be invested in only as a characteristic of conformed activities which defeats the entire purpose.

What is depicted in “Dead Poets Society” is an extreme example, but to 21st century students the mindset of fascism is still prominent.

According to philosopher Cevin Soling, fascism in schooling is inherent.

“Children are forced to be in school, often against their will, and they also concede that dissent, which by its nature is disruptive, is routinely suppressed in schools and that the student population is required to engage in activities that demand their mental and physical compliance at all times or face unpleasant consequences – they will reflexively reject the blatantly obvious statement that schools are fascist institutions,” Soling said.

Soling later adds that the most fruitful learning will come from opposing fascism in any form.

A more specific demonstration of this fascism in modern schooling would simply be school start times.

Adolescents require eight to 10 hours of sleep to be considered to have healthy sleeping patterns according to the National Sleep Foundation. Unfortunately, only 15 percent of adolescents report getting at least eight hours of sleep per night.

This lack of sleep that a majority of adolescents experience has been linked to mental health issues, learning and behavior issues, substance use and abuse, obesity, and dependence on sleep and anxiety medication.

Despite these facts, school start times have, on the whole, stayed the same. The authoritative control of students sleep schedules coupled with the health impacts of that control qualify modern American schooling as fascist.

The youth are told they have to wait 18 years to be considered full U.S. citizens and are simultaneously told that the 18 years are essential to grow necessary knowledge and understanding. The youth are tasked with being the next innovators and creators that contribute not only to our country but humanity. To be frank, I think the youth need as much sleep as they can get in order to fill the shoes of those that came before them.

Maybe you will fall back into the habits of your ancestors and sit back and just let things play out how they are. But maybe you’ll take Soling’s word and make it your ethical imperative to challenge fascism in every form.

Nevertheless, in whatever decision you make, you legitimize the essence of the U.S. that is undeniable – you have a choice. A choice to conform, a choice to strike, a choice to fight the standing laws. In anything that you do, carpe diem.