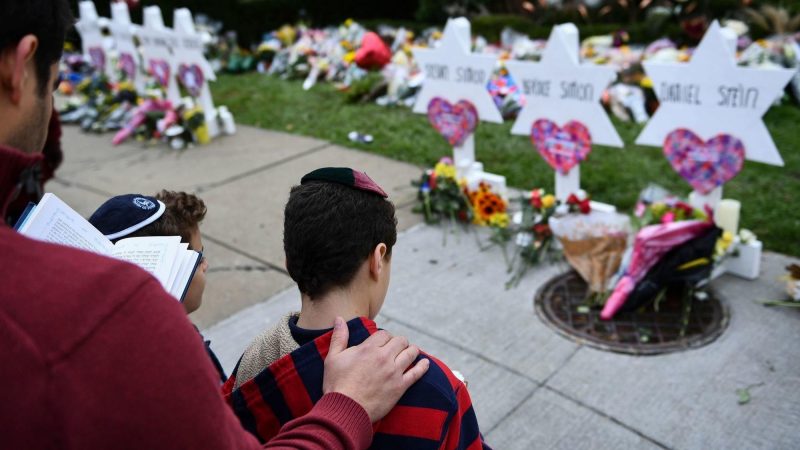 Visitors pay their respects Oct. 29, 2018, at a memorial outside the Tree of Life synagogue after a shooting there left 11 people dead in Pittsburgh.

On Oct. 27, a horrific shooting took place at the Tree of Life Congregation synagogue in Pittsburgh, Pennsylvania, claiming the lives of 11 innocents. The attacker, Robert Bowers, is known to have posted anti-Semitic jeremiads online, especially on far right websites with lax speech oversight like Gab. The attack shone a harsh spotlight on anti-Semitism in the U.S. and more broadly the intersection of religion and politics in the country.

Despite the frequent articulation of a separation of church and state first expressed by President Thomas Jefferson and endorsed by most presidents since then, religion is very much an active part of the U.S. public policy.

This fact should not come as any surprise: one of the U.S. founding documents, the Declaration of Independence, invokes a creator deity, the national motto since the days of President Eisenhower has been “In God We Trust” and the Pledge of Allegiance extols “One nation, under God.” Politicians are endlessly mentioning religion and religious values in speeches.

There is, however, a darker aspect to religion in the United States. Since the inception of the nation, Christianity has been the dominant religion in the U.S. and intolerance towards other religions has periodically swept the country.

Christianity  has been used as instrument to incite hatred and fear of other religions. Historically, rampant anti-Semitism has raged through the United States at regular intervals, and since 9/11 there has been a surge in Islamophobia that has yet to dissolve.

Prejudice concerning religion has always occupied a role in U.S. politics. In the 1920s, one of the first major Catholic contenders for the Presidency, Al Smith was defeated, in part, due to a virulent wave of anti-Catholicism sentiment across the country. In 1960, the first Catholic president, President Kennedy had to repeatedly confront and address questions on how his religiosity would affect his actions.

These divisive sentiments stirred up by demagogues, fearmongerers and morally debased politicians are definitely not representative of Christianity in the United States as a whole but can end in tragedy as it did in the shooting.

President Trump’s victory in 2016 emboldened white nationalists and other fringe groups that advocate hate. That is not a partisan opinion, it is merely the fact that there has been a surge in hate speech, hate crimes and other similar reprehensible conduct since the election of the current president. The white supremacist rally in Charlottesville showed the troubling trend that has only accelerated with time.

Anti-Semitism, specifically, and intolerance cloaked in religion, broadly, is once more on the rise in the United States and in Europe, and political entrepreneurs are stoking it. One just has to look at Hungary, where the authoritarian regime of Viktor Orban is blatantly harnessing it to incite hatred of Jewish philanthropist George Soros and of Muslim immigrants. In the U.S. one need only recall President Trump’s “Muslim Ban” to see religious-based intolerance growing.

There may be cause for hope if one turns back to history. As noted above, prior to the presidential election of John F. Kennedy, anti-Catholic sentiment was, as historian Arthur Schlesinger puts it, “[the] deepest bias in the history of the American people.” The Bosses of the Democratic Party were reluctant to sign on to JFK’s campaign for just that reason, yet with the election of Kennedy, a seeming dissolution of much of the anti-Catholic sentiment seems to have occurred.

While the Catholic Church has still occasionally been the target of fury and outrage by the American people, most recently with sexual abuse allegations, anti-Catholicism as a significant political force has not re-coalesced since Kennedy’s 1960 victory.

If Catholic prejudice could be rooted out in such a way, it is not outside the realm of possibility that anti-Semitism and Islamophobia may be rendered impotent in the future as well.

PreviousPrevious post: Advice Column: LaDues and Don’ts
NextNext post:Prison reform on the horizon for the U.S.