Former first lady of the United States, Barbara Bush, passed away April 17, 2018 in her Houston home surrounded by loved ones. She chose to spend her last days in comfort rather than seek further treatment for her failing health. She was 92 years old. Bush was born in New York in 1925, where she lived until marrying President George H.W. Bush in 1945 and moving to Midland, Texas in 1950. During this time, many in the nation have paused to reflect on her life and career.

As second lady of the U.S. under the Reagan Administration, Bush took on her first political project to increase literacy rates among youth, establishing the Barbara Bush Foundation for Family Literacy. Sparked by her son Neil’s diagnosis of dyslexia, Bush quickly began to realize the importance of literacy, referring to it as the “most important issue we have.”

As suggested by her literacy organization’s name, Bush recognized that literacy was about much more than education. Bush emphasized the importance of education and youth literacy and literacy’s importance in the family unit. Literate parents are able to read to their children, which provides both a bonding opportunity as well as an opportunity to learn about family history through documents and letters passed down through generations.

Bush acknowledged that illiteracy is not an isolated issue with a single source, and literacy became a springboard for numerous political issues from educational funding to fighting homelessness. By promoting the intersection of illiteracy and other socioeconomic disadvantages, she made literacy one of America’s most discussed problems and developed alternative educational programs for illiterate adults to give them a chance at a better life. During the remainder of her life, Bush stayed true to her devotion to literacy. Her husband acknowledged her devotion to literacy at her funeral with his socks. 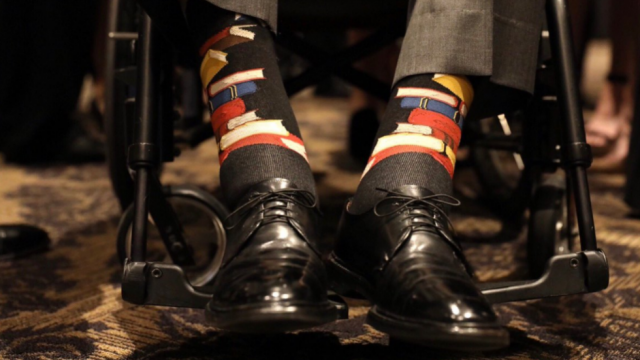 Bush was also involved in HIV/AIDs advocacy. The Republican Party and, more specifically, Presidents Reagan and George H.W. Bush received criticism for their silence on the growing AIDs epidemic. Choosing not to follow their lead, Bush visited those suffering with AIDs in a conscious effort to eliminate the social stigma surrounding the epidemic.

Bush made national headlines when she visited the non-profit organization Grandma’s House and closely held a young child infected with AIDs. She told the press it is perfectly safe to touch someone infected with the HIV virus and that infected individuals are people too. This humanizing effort showed that Bush, the first lady at the time, cleared a path for national acknowledgement of the AIDs epidemic and acceptance of infected people as victims, rather than untouchables. Bush’s actions and input on her husband’s political opinions possibly influenced George H.W. Bush’s passage of the Comprehensive AIDs Research Emergency Act, a bipartisan effort to help fund care for those infected with the HIV virus.