Rivas came to the College as a first-year in 2004 after an older brother had attended and graduated from Jewell. And while his family advocated for him to attend WJC, Rivas described his initial unwillingness and hesitancy.

“I wanted to go to UCM [University of Central Missouri], which was CMSU [Central Missouri State University] at the time, because they had a photo program and everything there,” said Rivas.

Once here, Rivas was placed into a radio major, a field he had not worked in previously. Before Jewell, he had focused on photography and videography, and though he found himself in unfamiliar territory again, he was not daunted. 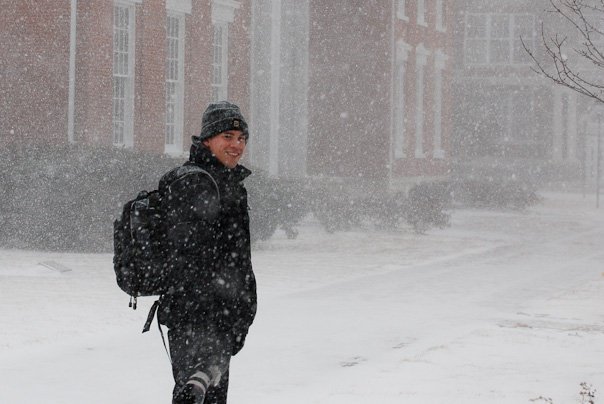 “I set some goals and said that by the time I graduated I wanted to have my first camera, own that, I wanted to do an internship somewhere in the area, and I also wanted to have some sort of job that pertained directly to that,” said Rivas.

But instead of taking four years to accomplish these goals, Rivas had completed all three of them within a few months. From there Rivas expanded the number and types of shoots he was doing.

“It was really entertaining being on a short, astro-turf, indoor football field with two cannons that are shooting flames 40 feet up into the air, like a Chiefs game but indoors and it doesn’t feel safe whatsoever,” said Rivas.

He is currently taking photos for the Kansas City Royals, a job that has picked up with the continuation of the Royals’ postseason.

Rivas’ work for the College also expanded with what he did for Jewell generally and the marketing department more specifically.

“My first year I only did 40 or 50 shoots for Jewell, my sophomore year I did about 130 shoots and my junior and senior year is when things really ramped up and I was doing nearly 250 shoots a year for Jewell,” said Rivas.

And all while Rivas was capturing photos for Jewell, he was majoring in communication, playing for the men’s golf team and serving as the photo editor for the “Hilltop Monitor.”

Rivas reflected on his time with the “Monitor.”

“It felt like we weren’t the most organized in terms of getting things done the quickest, but we were very, very methodical and very, very thoughtful about how we put together the newspaper those years. I always felt like those were our best years with the paper because there was this really talented staff that we had that would just make it work, and we focused on an impact image on the front page and a good story to go with that. And the College was doing a lot of great things; we had a lot of news stories my junior and senior year; some were good, some were not so good,” said Rivas.

The number of shoots Rivas has done for the College, as a student and an employee, may seem massive and overwhelming. But nevertheless, Rivas was able to pick out a few of his favorite shoots.

Every spring, some of the soon-to-be-graduated seniors put on their caps and gowns for the iconic cap-and-gown shoot. This tradition may seem as though it came with the establishment of the College. However, it began with Kyle Rivas.

For the last issue of the “Hilltop Monitor” of the spring 2008 semester, Rivas had no ideas for the final photo. But similar to many other good things, the cap-and-gown shoot came out of a little desperation, a little creative thinking and much determination on the part of Rivas.

After spending some time driving around campus, he was struck by the signage by the fountain at the College’s main entrance. He gathered some students, including his then girlfriend, now fiancée and business partner, and did a shoot that would become a rite of passage for many Jewell seniors to come.

While he may not have recognized the importance of it then, he certainly does now.

“What it started for the next seven years was really special to me, and each year I felt like we were getting bigger and better and doing crazier things, but still creating something that I knew was really important to the seniors and something that they would reference for the years to come. It is one of those things that I knew how important it was to them and I also knew how important it was to me because of my own experience with it. Even though I’m the shooter, it was still important to me,” said Rivas.

Within this tradition, that may soon be ending, there is a particular year that stood out to Rivas.

2011. Picture a spring storm. Normally the storm would have ruined the opportunity to shoot, and in some ways it did ruin the original concept. Instead of being located in the area around the schoolhouse and Grand River Chapel, which would have included the well-known swing, Rivas and the seniors took to the roof of Yates-Gill Union.

“[It was] something that we used to do until [the College] figured out that it wasn’t the greatest place, which I give them that. What ended up happening was that we were in between storms, and there was a storm that had stalled right over the Gladstone area and the sun was setting. The sun set underneath the storm and I had just had every layer of color that you could possibly have leading up to black. I did these silhouette shots of [the seniors] jumping on the rooftop, and I ended up backing up 30-40 feet toward the porch area but still shooting on the roof. It was just this really gorgeous view of everybody and we did a lot of individual shots and things. It just kept getting better and better. It was one of those shoots where you just can’t do anything wrong,” said Rivas.

A final Jewell memory stands out to Rivas, one that reflects his admiration for the sports photography he does now.

In 2006 the men’s soccer team was having the season of a lifetime. They had qualified for the NAIA National Championship and were traveling to Florida, and Rivas was invited to document all that happened next.

“Andy just lit up like I’ve never seen an athlete before. He blocked at least four of the goal kicks [in the Sweet 16], and each time he did it, it just got even crazier just because of his emotion and his reaction. And there was already a lot of emotion wrapped up into that [game]. He ended up single-handedly winning the game for us, for his PK blocks the first round. Then the Elite 8 came and it went into PKs again and he did it again. I just got this absolutely beautiful series of him just letting out every piece of emotion that he possibly could as a human,” said Rivas.

Then came the Final Four game.

“The only goal that got by [Shields] was a shot outside the penalty box. It was like from 25 yards and it was this ridiculous shot where this guy started it 15 feet outside of the goal post, bent it in, and it got into the corner. You have this shot of Andy reaching up, and it is the only foot and a half that he couldn’t cover. You couldn’t have hit this any more perfect and it got by him. It was the only goal that was scored that game,” said Rivas.

And thus ended the season for the 2006 men’s soccer team.

Shields passed away as a result of a massive stroke a few years later.

“[It] just taught me what it is I’m doing, what the importance behind it is and why I do what I do and why I try to invest so much time in the craft and just getting to know people. I’m just trying to take a step further than just taking pictures. I’m trying to figure out the story behind people as well as capturing them in the day to day,” said Rivas.

And now Rivas is now turning his focus to his company, Rivas Media Photography, and shooting events in KC. He reflected on his time with the College.

“[At Jewell] I am documenting lives on a daily basis. Whether the students realize it or not I’m watching them grow up a substantial amount, and a lot of times I’m watching them grow up just as much as I grow up. And that’s a big reason why I stayed as long as I did and the reason why I feel at home and why I’ve approached what I do, [which is] to blend in the students and to be part of the campus on a daily basis,” said Rivas. “And I’ve watched the community grow more like a family in the past 10 years than I ever thought [it would].”

All photos by Kyle Rivas.