John Ekwomadu, sophomore psychology major from Lagos, Nigeria, is one of the new students here at William Jewell College this semester. He spoke to the Monitor about football, his focus on his studies and why he came to the United States.

Ekwomadu is a transfer student from Lewis and Clark Community College where he used to be on the basketball team. He previously stayed with a family in St. Louis and one of their sons went to Jewell.When he decided to transfer to a college with a better education, he chose Jewell because of his past knowledge about the College.

“For me, sports it’s just a means to an end,” he said. “I’m trying to use sports to achieve a great goal.”

Ekwomadu chose to switch from playing basketball to football because he wanted something new – a challenge. Additionally, people always told him he looked more like a football player. John shared how he thinks he has the best teammates ever and how thankful he is to his team and coaches. 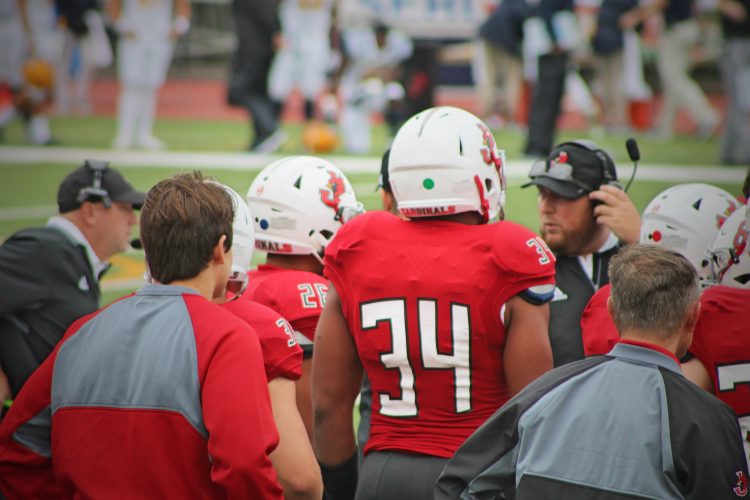 John Ekwomadu (#34) stands on the sideline surrounded by team mates.

Ekwomadu added that the other players on the defense have been helping him a lot since he’s new to football rules. He also mentioned that coach Corey Sudhoff has been very supportive, doing everything he can to help the player succeed.

Ekwomadu came to the U.S. looking for a better education than the one he would have back in Lagos, Nigeria. Coming from a developing country, he thought that he would have better opportunities if he studied here.

“I felt like coming to the U.S. would give me an edge,” he said. “And I also wanted to see the culture here, learn.”

Ekwomadu is a very dedicated athlete who is focused on his studies and future. With the help of his team, he’s working on becoming a great defense player while still working on his education.