Kansas City Pet Project (KCPP) is the largest no-kill animal shelter in Kansas City, Mo., and the third largest in the United States. Founded in January 2012, it is a nonprofit organization that works with other organizations in order to increase the number of homeless animals adopted each year. The goal of KCPP is to end the killing of healthy and adoptable pets in Kansas City, through progressive lifesaving programs and promoting effective and safe animal control policies.

According to its website, the organization works collaboratively with other animal welfare organizations to promote pet retention, animal identification, lost pet reunions and pet ownership education throughout the community.

KCPP has two popular adoption locations: one at the shopping center at Zona Rosa and another inside of a Petco located in Overland Park, Kan. There is a main shelter on Raytown Road in Kansas City. There is a large amount of space in all three buildings, but employees have to be creative about how they use this space. Most adoptions go through the center at Zona Rosa.

“With nearly 10,000 animals coming in every year, we get a wide variety of different animals, and of course different situations,” said Annie Frisbie, marketing assistant for KCPP.

KCPP is an open admission shelter, which means that it does not turn any animals away. Since so many animals come in every year, the shelter relies on the public to give these animals loving homes. The animals come from many places, such as KCMO Animal Control, the public and owners wanting to surrender their pets.

Like any other animal shelter, KCPP occasionally gets full. The shelter has some programs in place to avoid getting too full and having to turn down animals. One of those programs is the foster program.

“In our foster program, you can sign up online to become a foster parent. We are always looking for new fosters,” said Frisbie.

The purpose of the foster program is to allow homeless, sick and abused animals to receive the proper care needed while they wait for their “forever home.” Foster parents take care of animals that may need more medical attention so the healthier pets can remain in the adoption centers. After they have been cared for and are healthier, the foster pets can return to the shelter and be adopted.

Another program by KCPP is the barn cat program. Many cats that go through their shelters are feral or extremely unsocialized. In those cases, the shelter puts those cats up for adoption through this program. When these cats are adopted, many services that would usually be additional charges are included in the price, such as a spay/neuter surgery and essential vaccinations.

KCPP also offers other programs such as Pit Bull EDU and playgroup program, descriptions of which can be found on its website.

Because the shelter is a nonprofit organization, fundraising programs help with expenses. One of the fundraising efforts in place is called the roadrunner fund. Many of the cats and dogs that come through their doors are in immediate need of critical medical attention. This fund covers the expenses needed to pay outside veterinarians and continue treatment for ill and abused animals.

Businesses, individuals and families can sponsor a dog or cat kennel at the shelter. In order to sponsor a kennel, the group or individual will make the donation, and an honorary plaque will be placed on the kennel that they have decided to sponsor.

In addition to these fundraising efforts, individuals can make general donations online or in person at the shelters.

There are many volunteer opportunities through KCPP. Volunteers walk dogs, work at fundraising events, help with paperwork, collect donations, drive animals to veterinary appointments and socialize with the animals in the shelters. 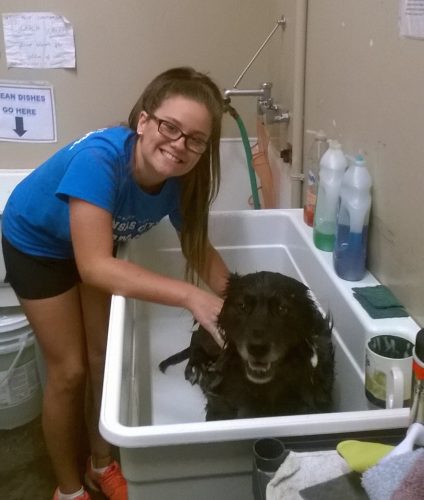 “I volunteered for dog rescues back at home in Saint Louis, so before I got to Jewell, I looked for a rescue to volunteer at. It is a humbling experience that is extremely educational while giving me a sense of my home life,” said Weinhold.

“My favorite part of KCPP is the organization that they have achieved,” said Weinhold.

When Weinhold volunteers at KCPP, all she has to do is look at the white board that they have at the shelter, which displays information about all of the animals, and determine which dog most needs a walk. She said that she gets to work at her own pace and really spend quality time with the dogs.

“KCPP has specific leashes, a certain way to walk the dog and a strict policy to make sure the animals do not come in contact with each other. Their organization has made a big difference in the dogs’ behavior and likelihood to be adopted,” said Weinhold.

Kelsey Jones, sophomore nursing and ACT-In major, adopted her kittens through KCPP. Her family adopted at the main center on Raytown Road. According to Jones, the employees at KCPP were very helpful throughout the process.

“[We were] led into a room where we were able to play with and get to know [the cats]. They also helped you with your decision by showing you which cats would work best for your home situation,” said Jones.

After you pick out your future pet, an on-staff veterinarian checks out the animal to make sure that it is in the best shape possible to be taken home.

“We had a very good experience there,” said Jones.

KCPP is making strides to reduce the number of homeless and sick pets which go unadopted each year in the Kansas City area. To learn more, visit their page at kcpetproject.org.