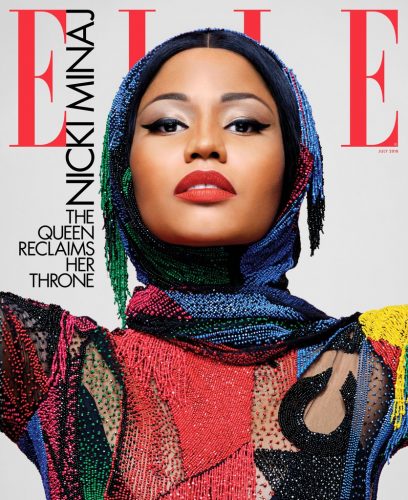 Nicki Minaj on the cover of Elle. (Photo courtesy of Karl Lagerfeld.)

The year of 2018 has proven to be a critical one for the revival of music with a message, a story and something to prove. Many new artists were able to make names of themselves this year, such as Billie Eilish after the release of “Don’t Smile at Me” and Ella Mai after the release of her self-titled album. This list is based on what each artist was going for with their sound, their lyrics and their ability to make a cohesive album.

Ariana Grande has always been one to put out upbeat and happy music, but in this latest album she brought a different sound that the world had not yet heard. Working with Pharell for most of the album, Grande was able to make these funky beats into smash hits. Her hit song, “No Tears Left to Cry,” brought out a side in Grande we weren’t used to seeing and clued us in on what kind of vibe she was going for up until the release of her album. Grande wanted to put out an album that made everyone feel good and feel happy, especially after all she had been through – a terrorist attack, losing her fiance and Mac Miller’s death. Ariana Grande delivered a powerful album which was, thankfully, one of the best this year.

Travis Scott has always been one to lead the pack in different beats and sounds, so it came to no surprise that he experimented with sounds that none of us has heard yet. From his smash hit “SICKO MODE” to “STOP TRYING TO BE GOD,” Scott delivered a powerful album that charted at number one on the Billboard 200 for two weeks, a feat that many artists are not able to claim. With the birth of his newborn daughter, Stormi, Travis Scott delivered the public an album that exposed them to his vulnerable side and let the world know that he too is human, an exposition which tends to lend itself to create an artist’s best album, and Astroworld is definitely his best album.

Cardi B’s first studio album was a smash hit among the public in the U.S. Her rise to fame came from her appearance on “Love and Hip-Hop,” but her household name recognition came from her smash hit “Bodak Yellow,” reaching the number one spot on the Billboard Hot 100, the first for a female rapper since Lauryn Hill’s “Doo Wop.” Cardi B wanted to prove to everyone that she is not just a one-hit-wonder, doing just that with this album.

She was able to score another number one hit with her song “I Like It” featuring Bad Bunny and J. Balvin. However, she produced a very generic hip-hop album and did nothing to push creativity among other female rappers by openly admitting that she doesn’t write her own raps. However, Cardi B’s album showed the world that she is here to stay.

This six-track EP allowed us into the mind of Abel Tesfaye. Fresh off of two breakups, The Weeknd released this album to let the world know that the pain he is feeling from his failed relationships is like no other.

His standout song “Call Out My Name” is very personal, making the sound he produced echo his suffering through the entire album. “My Dear Melancholy” is definitely the album that people should, could and would listen to after a breakup.

Much like other artists on this list, Mendes was able to open up about his past and what he currently struggles with. He was open in his music and provided a softer sound than what he normally does, admitting that he struggles with anxiety in his standout song “In My Blood.”

Mendes was able to show his fans that he is human and that he struggles with the same things that they do. This was a crucial album for Mendes’ career in that it’ll allow him to be a freer artist and be more comfortable with putting out songs that reflect what he’s feeling, rather than what he is pressured to do.

In his latest album, Troye Sivan was able to turn himself from a small artist that had a few hits to a well-known name. All of his singles were able to chart within a few hours of release, especially his hit “Dance to This,” featuring Ariana Grande.

Sivan’s album allowed him to bloom into a different kind of artist, showing a more free spirit that lives within him and allows listeners to enjoy it through his soft lyrics. Sivan was able to draw more attention to his album by stepping outside the ordinary and making music with a passion, something that is truly missing in the music industry at times. Sivan’s passion and creativity are what drove his album to popularity and allowed him to gain respect among his fellow artists.

Malone’s ability to switch from generic pop music to hip-hop with new beats to punk rock allowed for a nice flow to the album. His standout songs “Ball For Me,” featuring Nicki Minaj, and “Better Now” are still currently selling and being streamed heavily despite releasing his album back in April. His versatility among sounds on his album is what keeps Post Malone such a fan favorite.

One of the kings of rap, Lil Wayne was able to finally deliver a monster album that the public has been waiting for for about seven years. His versatility throughout the album proves once again that he is a standout among other male rappers.

Through the fast-paced storytelling of “Mona Lisa,” featuring Kendrick Lamar, to the slow ballad “Dark Side of the Mood,” featuring Nicki Minaj, to the upbeat and danceable “Uproar,” featuring Swizz Beatz, Lil Wayne was able to show the public that he is still capable of writing and recording songs that everyone will love. Lil Wayne was able to solidify his place among the kings of rap and will forever go down in history as one of the greatest lyricists of all time.

Though not a highly anticipated album, Janelle Monae was able to deliver an album with a powerful message: equality. Her versatility is unmatched among artists. She was able to go from a three minute rap on black power on “Django Jane,” to discussing bisexuality through a funky pop beat on “Make Me Feel,” to singing flawlessly and eloquently about her flaws and how she is just the same as us on her opening song “Dirty Computer,” featuring Brian Wilson.

Monae has always been a trendsetter for others and her versatility among her music will forever be unmatched.

Along with having the most anticipated album of the year, Nicki Minaj delivered the greatest album of 2018. Her flow and her style in her music are unmatched by any other rapper, male or female. From her standout freestyle “Chun-Li” to switching it up on a classic hip-hop beat on “Barbie Dreams” to singing a love ballad on “Come See About Me,” Minaj’s album had it all.

Minaj’s ability to transition from a quick pace rap to singing a love song is a skill that no other rap artist has or will have. Many people criticized her and thought she was too old to still be rapping and to still be on top, but Minaj proved all of them wrong with this album. Though not as vulnerable as “The PinkPrint,” this album allowed her to flex her pen game and show why she is and forever will be the undisputed queen of rap.