Angela Martin, Cindy Eggleston and Kristina Clevenger, the William Jewell College baristas, bustle around the campus coffee shops, the Perch and the Beak, fueling students with both java and kind words.

“I enjoy interacting with college kids,” said Clevenger. “They are like family. I think of some of them like my own children.”

A family atmosphere develops around the Jewell coffee shops because the baristas take their jobs seriously. They are always there and interacting with students.  So much so that the baristas know the students’ drink orders said Eggleston.

Jewell students appreciate all their barista mamas do for them and enjoy the constancy in their crazy college schedules.

Martin enjoys how the students show their gratitude, such as when a graduating WJC senior brought her flowers and when the boys write her thank you notes and tweets.

However, these women have lives separate from making coffee every morning. All have children of their own and individual passions.

Martin grew up in Michigan and moved to Kearney when she was a freshman in high school. She and her husband decided to put their roots down in Kearney because they like the small town atmosphere.

All three of Martin’s children have and are getting WJC educations. Madeline graduated in 2015 and will be returning to take advantage of Jewell’s accelerated nursing program. Martin’s son Jonathon is a senior, while Noah is a freshman. 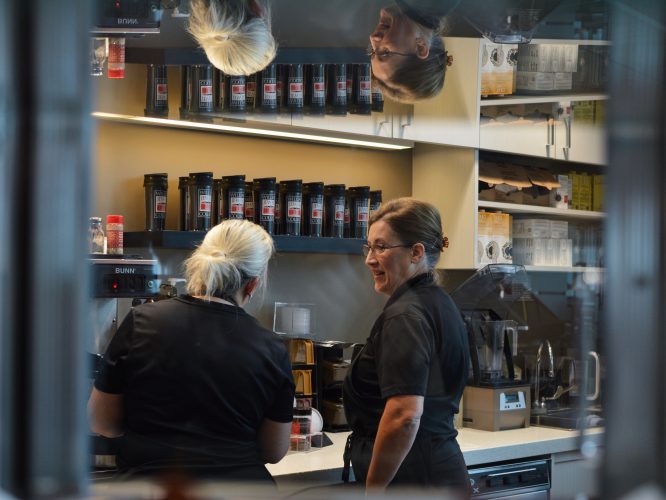 While her kids were in high school, Martin was heavily involved in the school’s theater and vocal music programs.

Currently, with all of her kids out of or attending college, Martin is happy spending her downtime around the house and gardening.

Clevenger, a coffee shop supervisor who frequents the Perch, grew up in the Kansas City area and has three kids.

Clevenger’s kids went to Kearney high school with Martin’s children. And like Martin, Clevenger has a senior and a freshman attending Jewell.

With her third child being a freshman in high school, Clevenger is busy volunteering as the president of the Parent Teacher Organization at Kearney Junior High.

Clevenger was a stay at home mom for ten years, then came to Jewell to work and go back to school as a studio art major.

She always enjoyed creating art and realized that she had talent when she received awards in high school for her artwork from the Kansas City Art Institute.

Through art classes at Jewell, Clevenger learned to weld. She gets creative with her new-found skill to make functional art such as a toilet paper holder that craftily looks like a cloud. She also welded an intricate, silver tree.

Art comes naturally to Clevenger, as she made the tree in one night while watching TV with her husband. She donated the tree to the rehabilitation institute of Kansas City to raise money for children’s therapy. 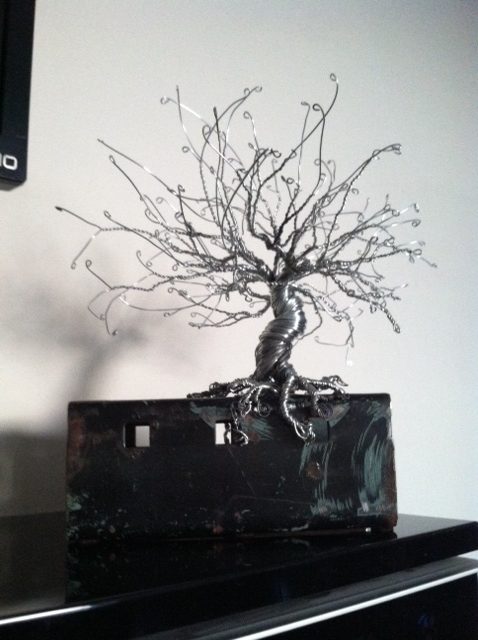 Eggleston is a Liberty native and was also a Jewell student. In fact, she was the first of her family to attend college.

Now a Jewell Alum, she majored in psychology and can relate with current students as she also remembers having Dr. Owens as a professor.

During her days as a student, Eggleston was involved on campus as a member of the Delta Zeta sorority.

Eggleston continues the tradition of working at Jewell, as her mother worked at Jewell for 30 years.

Eggleston’s two children may follow the Jewell family tradition. Her daughter is a senior in high school at Liberty, while her son is in eighth grade.

When she needs a break, Eggleston trades her barista apron for a swimsuit and vacations at Siesta Key, Fla. and Eleuthera, Bahamas. 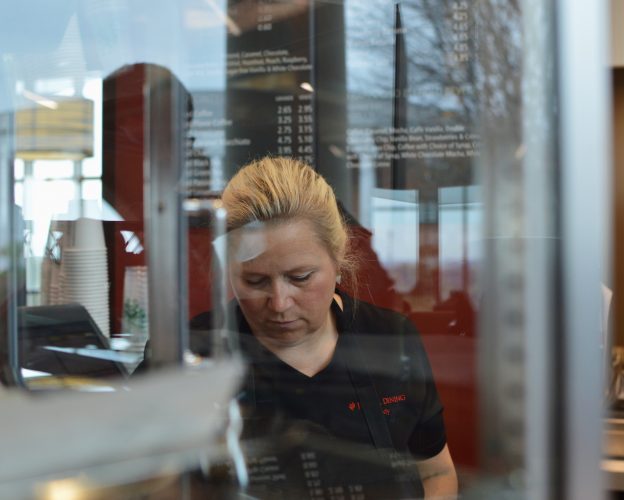 Show the baristas that you appreciate all they do for Jewell students. But don’t show your gratitude to Clevenger by buying her coffee—she doesn’t like coffee.

Eggleston’s favorite drink, though, is a white mocha toffee nut hot or cold, and her favorite drink to make is an iced caramel macchiato because they are pretty.

The baristas are individuals separate from their role as mama baristas, but they also embrace jobs that allow them to forge relationships with the college students that they interact with daily.

PreviousPrevious post: Trump is unqualified, ignorant and dangerous, but he’s still my president
NextNext post:Photo Feature: Noticed or Not