“The purpose, initially, was to allow women to bring their own individual gifts to support the College,” said President Judy Rychlewski.

The Woman’s Committee started with many educational programs and scholarships to support the women of WJC. The original committee not only provided scholarships, but also practical and aesthetic projects for the college. This mission has been carried on to today’s committee, which consists of around 250 members.

According to the organization’s website, the committee was purposely named with the singular form “woman” because the founders believed it emphasized that each woman brings individual gifts, talents and strengths to enrich the committee and help support the committee’s mission.

“[The committee] bring a woman’s touch to the College, to bond women to women, support our First Lady and the women of William Jewell,” said Rychlewski.

The Woman’s Committee has completed many projects on Jewell’s campus. One of the initial projects, which they did for the 25 year anniversary of the committee, was to hand write the addresses on invitations to Achievement Day. For the 19 year anniversary, they sponsored tours and lunches at the Nelson Atkins Museum. When the WJC fine art’s program opened, the women sponsored one of its early events. Overall, the committee helps with many beautification projects around campus. Examples include planting trees after the tornado that struck campus in 2003, adding artwork to the Semple lobby, tiling the front entrance of Melrose and buying a piano for space outside the music department.

Mary Sallee, first lady of WJC, is a member of the Woman’s Committee, who assist Sallee many ways.

“Several years ago, [the] Woman’s Committee hosted a ‘hospitality shower’ for the President’s House. [They] registered [us] at Macy’s and Dillard’s as engaged couples do. Participants bought things needed for the President’s House. We didn’t have many linens to set the big dining room table with matching tablecloth and napkins. Woman’s Committee members purchased linens so that I can set both dining rooms in the same fashion,” said Sallee.

Another project that Sallee pointed out was the “First Ladies Gallery” located on the second floor of Yates Gill College Union. It started with only a portrait of the first president’s wife and the then-current president’s wife.

More information about this project can be found by the gallery in YGCU.

The Woman’s Committee recently celebrated its 50th anniversary. At the celebration, 2004 graduate Shannon Oleen spoke. She is an international keynote speaker and spoke to the women about celebrating milestones. 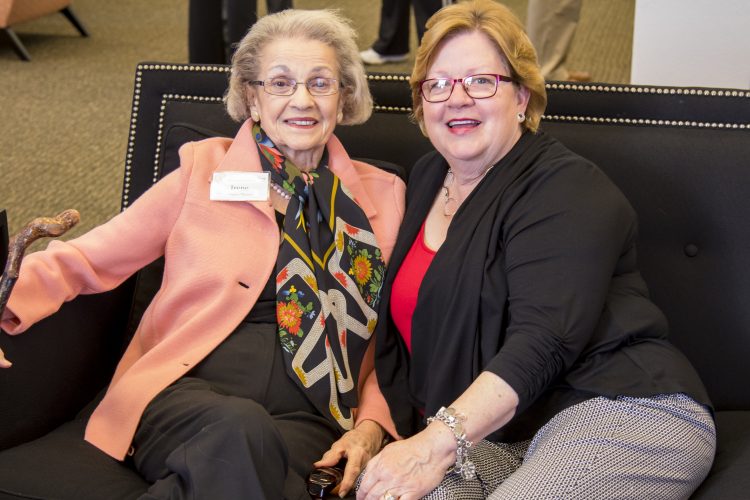 “She did an excellent job of talking about the things that women do to make things great. It was really a positive message,” said Rychlewski.

The committee focuses many of their projects on raising funds so they can give scholarships to women. The committee’s biggest project recently was their 50-by-50 campaign. During the committee’s 47th year, the idea to raise the endowment to $50,000 by its 50th year was presented.

“Admittedly, it was a great personal highlight for me to be recognized in the same way. I will love knowing that every year a woman at Jewell will receive a scholarship with ‘my’ name on it,” said Sallee.

Currently, the committee gives out three $1,000 scholarships to junior and senior WJC women every year. This year’s recipients were Brooklyn Bradley, Cari Hill and Ericka DaMitz. An application for the scholarship is released in January and can be found on the Woman’s Committee’s website. Women interested in becoming involved can contact President Judy Rychlewski at rychlewskj@william.jewell.edu.