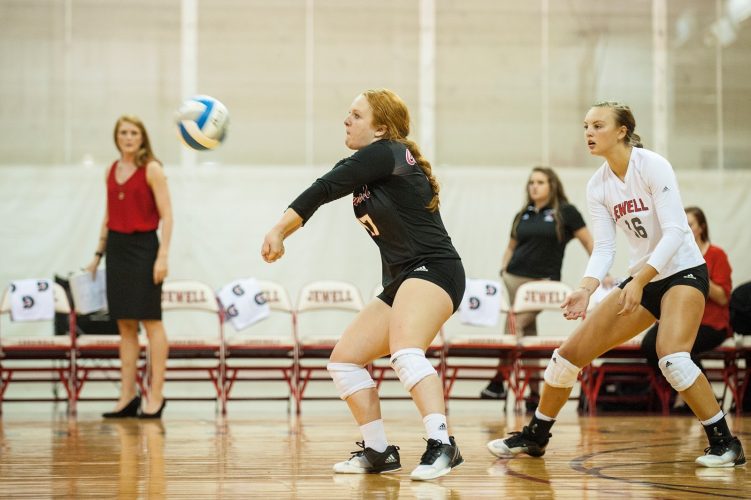 Olivia Tolberd, senior mathematics and psychology major, spoke to The Hilltop Monitor about playing volleyball at William Jewell College and how it’s shaped her time at the institution.

Tolberd began by telling the Monitor about how she stays competitive in the sport while balancing a busy school life and how the sport has helped her interpersonal skills.

“[Volleyball has] definitely given me organization skills. Sometimes it’s easy to, like, get overwhelmed and panic because, like, practice is two hours, and we have to get there 30 mins. before, and it takes like 30-40 mins after, so it takes out like three and a half hours of your day. That’s three and a half hours I could have spent doing homework or something else, so it just makes you be really organized,” Tolberd said, before adding, “I feel like I’m way more productive in-season than I am out of season because I’m like ‘okay I need to get this stuff done, I don’t have time later.’ When you’re out of season and have time it’s like ‘eh it’s fine, I don’t really have to do it.’ So when I’m in volleyball season I’m very productive and very organized, so that helps me a lot.”

I also think it’s made me able to, like, handle different people, because all of us on the volleyball team are different in every way, but we all find a way to get along and have fun and be friends with each other. So I may not understand her point of view, but I’m still able to respect her point of view. Having that mentality of like not always getting along with people but making it work with them, especially when we’re frustrated. In the middle of the game where you’re losing, you can’t sit there and be a turd to people, you have to find a way, in a respectful manner, to be like ‘you can do this, let’s go, you do your job I’ll do mine’ kind of thing. I’ve always been competitive, too — it helps drive me to be competitive. It gives me an outlet for that,” said Tolberd.

She continued to talk about her beginnings in the sport and how her early start and familial ties to volleyball gave her skill for the game before she began playing.

“I started playing volleyball in 4th grade. I wanted to play earlier but my sister was playing, so I’d go to all of her club practices and all of her stuff, and I would be the little kid on the sideline passing the ball, so that was a lot of fun. My parents made me start with a YMCA league – I was a 4th grader playing on a 6th grade team, but that was fun,” Tolberd said. “I would play around with my sister and just, like, from being an observant kid I would listen when people were talking [about game technique]. Also being from Wichita I went to a lot of Wichita State games and all their camps, so I was very trained early on.”

Originally a setter, Tolberd switched positions when she first came to Jewell and has been playing as a D/S Libero ever since.

“I’m a D/S Libero, so I pass in the back row – I don’t hit. [I had to switch positions because] I’m too short. So usually the older you get you want a taller setter you can eventually go front row and be a blocker, but being 5’3” I don’t get to have the height advantage. So I decided to go passing,” said Tolberd.

After switching positions due to her height, Tolberd has been able to compare the two and has noted different advantages and disadvantages to being 5’3” in a height-centric sport.

“I’m closer to the floor so I can get down faster, and it’s easier for me to dive, but at the same time if a ball is hit high I have to really jump and sometimes I can’t even jump high enough to get it. There’s kind of a joke that I need to be one foot taller, but it’s also kind of nice because, like, a tall person who’s diving will take longer [than I would],” Tolberd said.

An additional benefit is that Tolberd, due to her natural height and intensely practiced skill, has become an exceptional digger and is, at the time writing, only 34 digs away from breaking the career record of 2,118. Tolberd spoke about how she has gotten to a point in her collegiate career that she will most likely break the record.

“From the beginning I guess, I’ve had the chance to play Libero all four years so it’s been a great opportunity, and I loved doing it. I think that’s just where it all started. Freshman year I was able to sort of start my trek [towards the record], even though I wasn’t really aware of the goals for that kind of stuff,” said Tolberd. “Sophomore year was when I knew like ‘hey these goals actually exist.’ Since then it’s sort of like I’ve been chasing it and I’ve had my eye set on it. But yeah, I’ve sort of been working on it since freshman year when I first started on the court.”

Tolberd excitedly told the Monitor that she is likely to break the career record within the next two volleyball games, both of which are at home. For those wanting to support the volleyball team as well as catch the record-breaking game, the Cardinals play Friday, Sept. 28 at 7 p.m. against Bellarmine University and Saturday, Sept. 29 at 3 p.m. against the University of Southern Indiana.