The CCC website describes the Conference as “a space to bring our whole selves while bringing curiosity about others’ experiences and perspectives, and to share our own ideas, questions and experiences in order to move the LGBTQ movement forward.”

“The conference centered on issues of marginalized identities in society and how those identities intersect each other to create more complex issues,” said Ruwe. “The identities mainly represented were the LGBT community, those affected by racism, members of the feminist movement and the disabled community. The conference worked to help those attending understand what they can do to create change in their own environments that is helpful for everyone.”

The Conference had keynote speakers, workshops, institutes and other events centered on LGBTQ+ and other marginalized groups’ equality and rights. 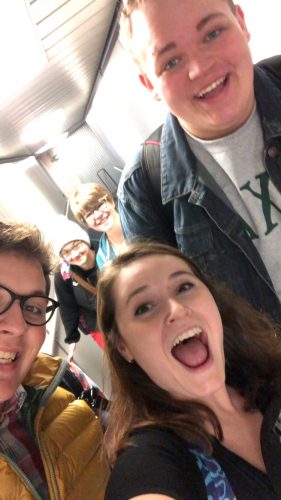 Jacqueline Parson, junior psychological science, music and mathematics major, said that the Conference was inclusive and attendees were diverse.

“People of all ages, nationalities, sexual orientation, and gender attend, as the topics are not limited to one certain group in particular, but more so exemplify the importance of working together, regardless of identity or appearance, in order to achieve a common goal of equality and freedom,” Parson said.

If given the chance, Ruwe would improve the Conference’s intersectionality.

“I would like it if there were more workshops on intersectionality and how people who are members of only one marginalized identity can be better about advocating for their cause in a way that is intersectional and inclusive,” said Ruwe.

Ruwe’s suggestion coincides with the general direction in which the CCC is moving. In 2016, the National LGBTQ Task Force began a review of the Conference in order to “learn, adapt and evolve for the next era of progressive change.”

Parson’s favorite part of the CCC is the way it brings people of such diverse backgrounds together.

“So many of the people in attendance are marginalized and oppressed in today’s political environment, and knowing that there are people around the world fighting for the same causes you believe in just really makes it all feel worth it,” Parson said.

Elliott Yoakum, sophomore Oxbridge Literature and Theory major, said he enjoyed how interactive each session was.

“We were often put in groups or with partners to discuss our own thoughts. In this way, the Conference was incredibly engaging, bringing me to interact with others and with the issues,” said Yoakum.

The students plan to use the lessons they learned during the CCC to enact change and more inclusivity at Jewell.

Sam Fulte, junior biochemistry and ACT-In major, learned about programming and policies that other colleges have.

“I plan to use this new knowledge to influence policy changes and programming offered here at Jewell,” Fulte said.

Ruwe attended workshops on successful organization and how to make a group as open and inclusive as possible and would like to implement those into QUILTBAG.

“I also want to help make Jewell more involved in our community and become a bigger part in effecting change around us,” said Ruwe.

Parson said Jewell’s CCC attendees plan to use what they learned to steer the College to become a more inclusive environment.

“We are hoping to be able to start administration workshops for faculty and staff at Jewell in order to share the things we obtained at this conference, and also collectively work towards a better understanding of a truly inclusive environment. My personal goal is to encourage a move towards social justice, rather than just focusing on diversity at Jewell,” Parson said.